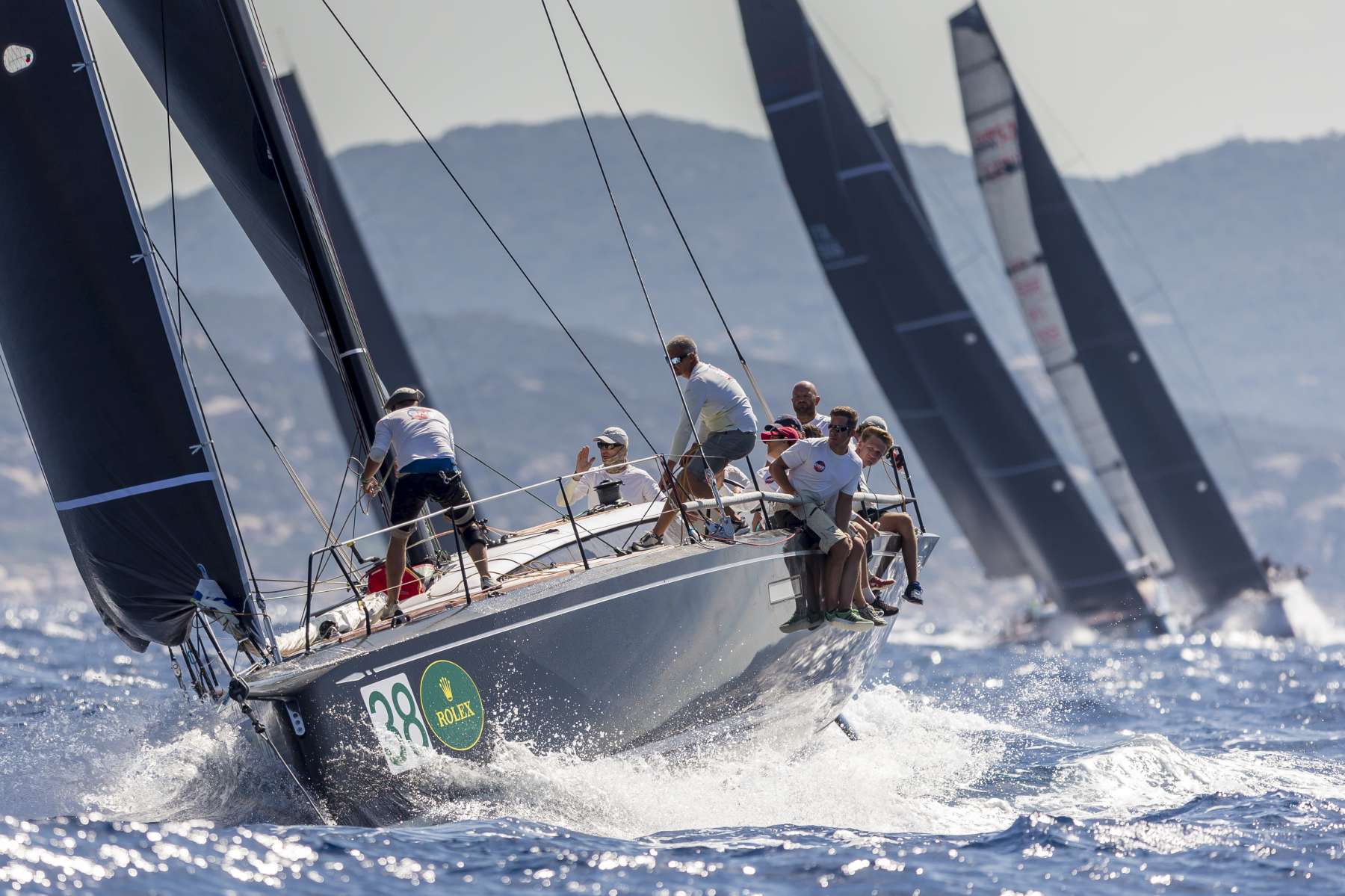 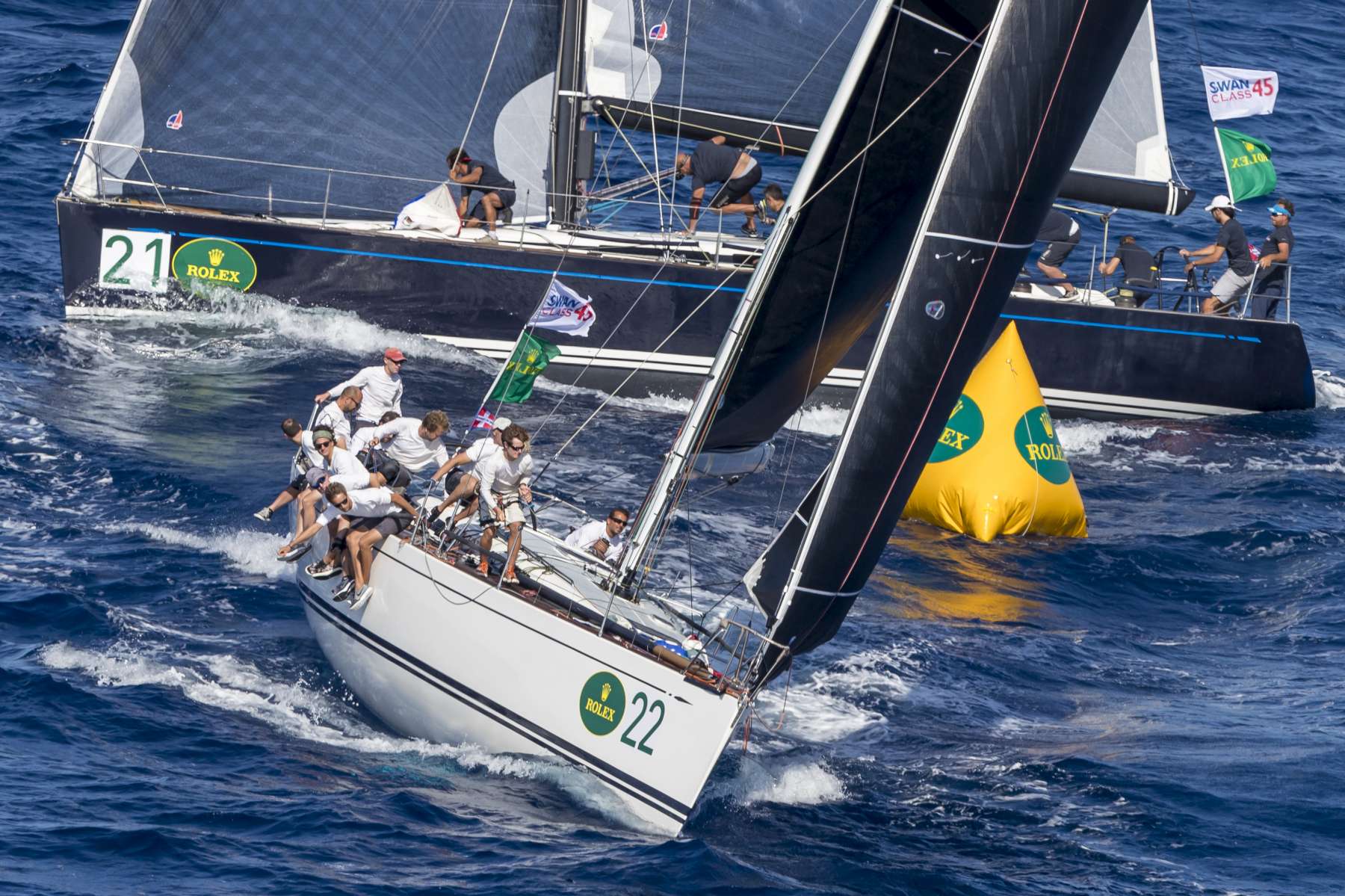 Porto Cervo, Italy. 15 September 2018. On the penultimate day of racing at the 20th edition of the Rolex Swan Cup, the Islands Long Race saw the entire fleet of 110 Swan yachts from 17 countries cover a distance of 34 miles - 30.4 for the Sparkman & Stephens class - around the La Maddalena archipelago. They were accompanied by perfect westerly winds of 12 knots on the starting line which reached 18 knots as fleet approached the islet of Barettini under spinnaker, practically in the Bocche di Bonifacio straits.

The Rolex Swan Cup is organised by the Yacht Club Costa Smeralda in collaboration with Nautor's Swan and with the support of title sponsor Rolex.

The starting procedure on the waters off Porto Cervo got underway as scheduled at 11.30 a.m. with the Maxi division, who were followed by the three One Design classes, then the Grand Prix and S&S groups. The course included an upwind beat through the Passo delle Bisce channel before the fleet rounded Spargiotto island and headed on a reaching leg to the islet of Monaci, which it left to starboard. Then it was back to the Saline gulf, leaving the Secca di Tre Monti to port and once again through the Bisce pass to the finish off Porto Cervo.

In the 18-boat Maxi division, it was once again the Swan 80 Plis-Play that claimed victory, 44 seconds ahead of the Swan 90 Nefertiti in corrected time. Third place went to the Swan 601 Flow, consolidating their second place in the overall standings behind Plis-Play. Stephen Cucchiaro, owner of Flow: "A fantastic day, the Swan 601s all sailed very close to each other. It was a sort of match race, gaining ground tack by tack. This is our second time at the Rolex Swan Cup and I have to say that racing in Porto Cervo is always a unique experience."

In the competitive fleet of ClubSwan 50s, which will tomorrow see the very first class world championship assigned, OneGroup was the clear leader ahead of a newly-competitive Bronenosec, the Russian team fielding Italian tactician Alberto Barovier. Third place went to the Swiss yacht Mathilde which fought hand-to-hand for the second place finish for a good part of the race.

A battle for the world championship title is also underway in the Swan 45 class, where today Elena Nova triumphed ahead of T'Ala and Porron IX, reigning champion and still the leader in the provisional standings by just one point ahead of Elena Nova. Tactician on Elena Nova, Sten Mohr, commented: "The conditions could not have been better, with a nice cool wind of up to 20 knots. It was a very exciting but tough race, with the top three boats only a few seconds from each other. It was very much a tactical race, at Spargiotto we were in second, then we were able to get into the lead and we held onto first place until the end. The provisional ranking sees us as all very close and everything will be decided tomorrow. Racing should always be like this, hard-fought right up to the last day."

The Rolex Swan Cup is valid as the European championship of the Club Swan42 class, where the win of the day went to Natalia after Pez de April - first across the finish line - retired voluntarily due to having sailed through a prohibited zone near the Secca del Cervo. Selene Alifax came second and in third place was Mela - maintaining their lead in the provisional overall classification with a 10-point margin over second place.

Amongst the Swans in the Grand Prix division the Swan 53 Solte continued their winning streak with a third consecutive victory today strengthening their lead ahead of Crilia and the Swan 54 Nehalennia.

The historic Swans designed by Sparkman & Stephens make up the largest class, with 26 yachts, ten of which are Swan 65s. Today, five examples of this iconic Nautor model claimed the top five places: Six Jaguar, Shirlaf, Libelula, Spirit, and Venator respectively. Tomorrow, victory in the Rolex Swan Cup 2018 S&S class will go to one amongst today's top three yachts.

This evening the crew party is scheduled to take place, one of the social events that the Rolex Swan Cup is famous for. Tomorrow, after the usual weather briefing by Quantum Sails, the Swans will leave the docks for the final day of racing in the 20th edition of the Rolex Swan Cup.