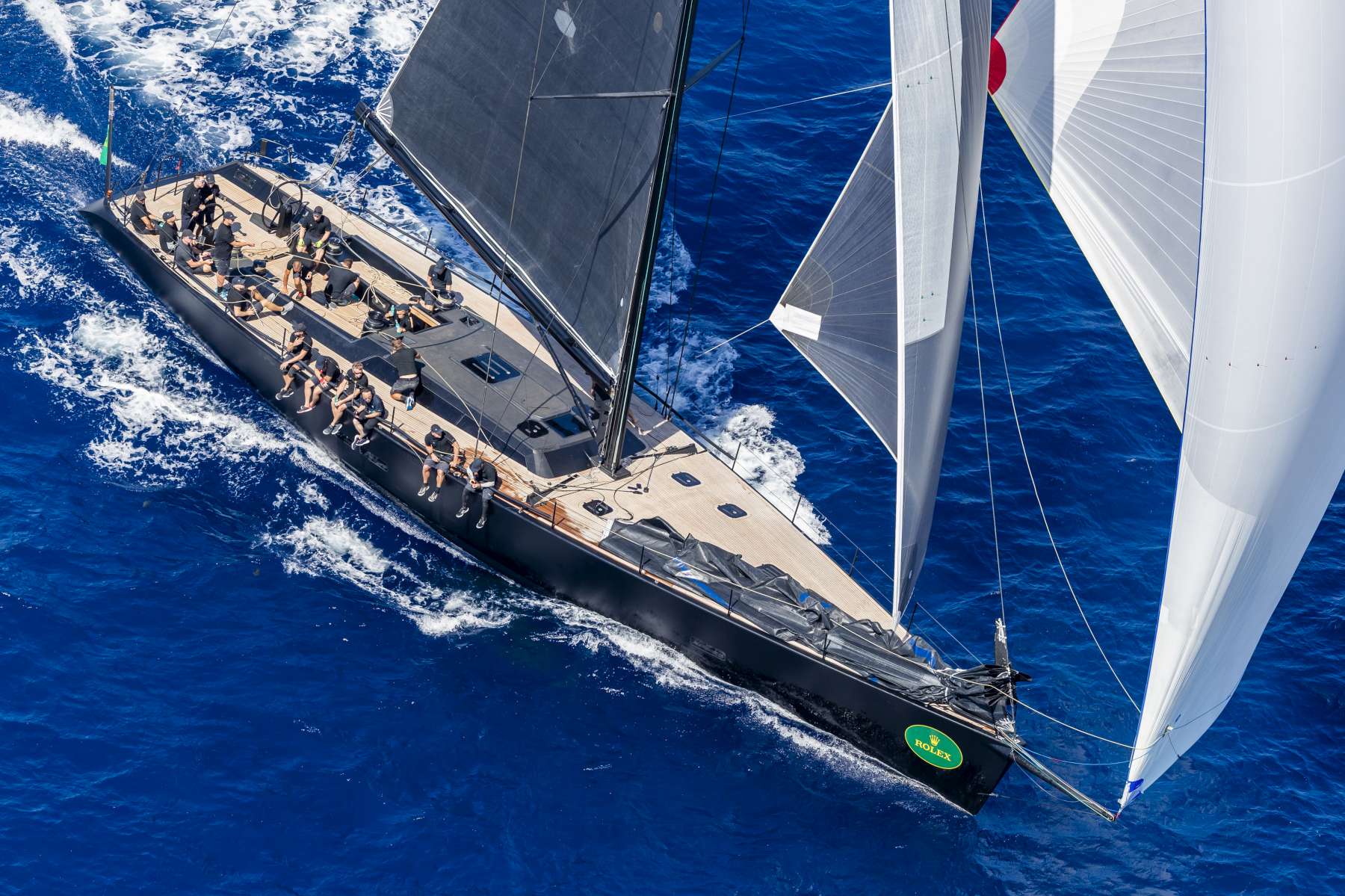 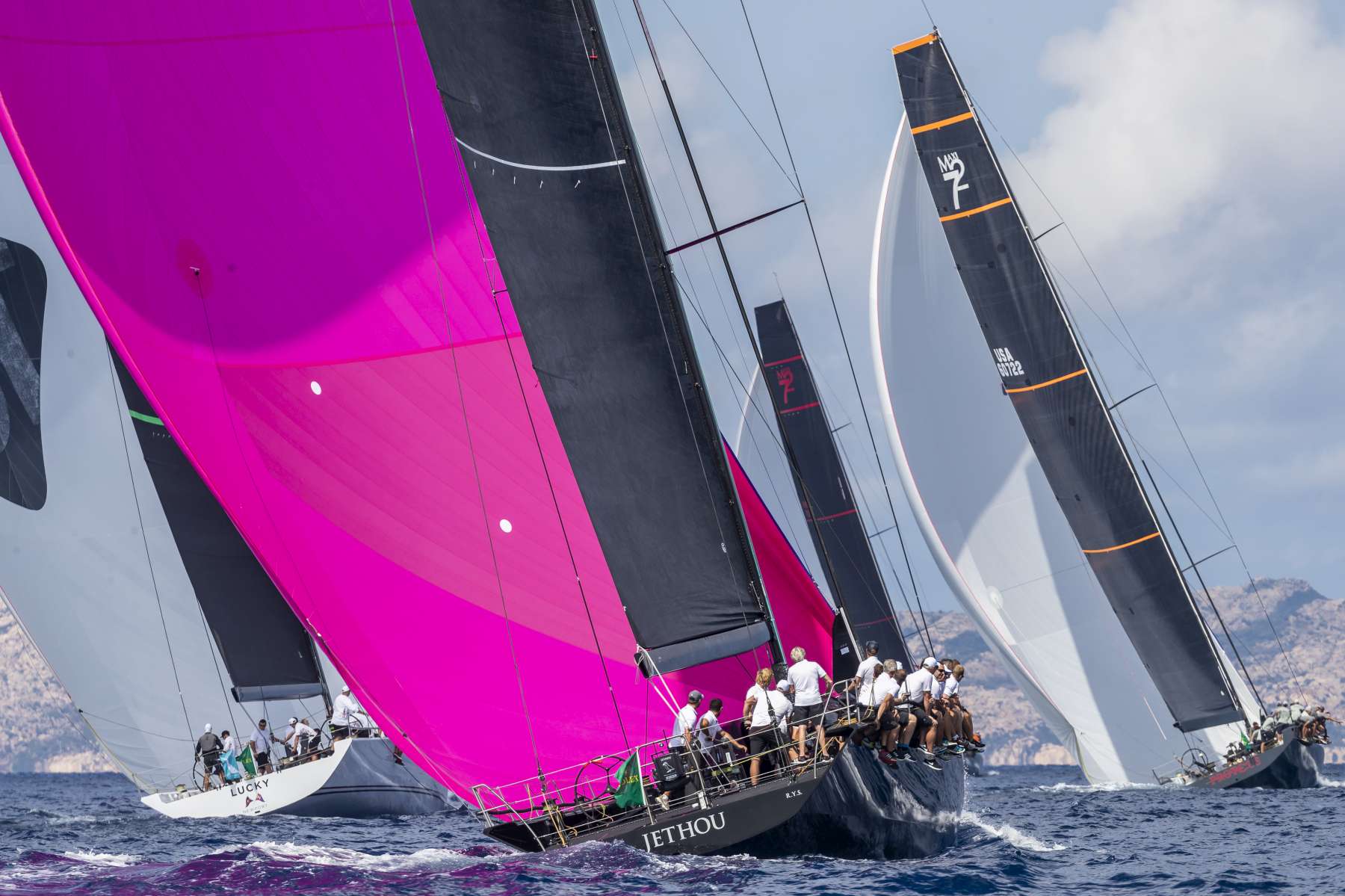 Winners of the third day of the regatta in their respective classes were Momo, Velsheda, Lyra, Vera, Oscar 3 and H2O

Porto Cervo, 5 September 2018. Day three of the Maxi Yacht Rolex Cup & Rolex Maxi 72 World Championship welcomed a light easterly wind which allowed the Wally Class to complete two windward-leeward races off Porto Cervo, while the remaining five classes competed in a coastal race of 34 miles - reduced to 31 for the Mini Maxi class- which took the yachts anti-clockwise around the islands of Caprera and La Maddalena.

The event is organised by the Yacht Club Costa Smeralda with the support of the International Maxi Association and Title sponsor Rolex.

At 11.30 am, with a wind of approximately 8 knots and flat seas, the Race Committee initiated the starting procedure on time for the Maxi 72 class, the fastest boats. Starts followed for the other categories into which the fleet of over 40 yachts has been divided. The first upwind leg to the offset mark was fundamental for all of the divisions, and was characterised by wind shifts and holes. Although initially a start on the right of the course seemed favoured, a wind shift accompanied by a drop to around 6 knots played to those boats that had chosen the left. In each of the classes, those who managed to round the weather mark well went on to take the victories of the day.

On the windward-leeward course, where the Wally Class was racing, the starting procedure was postponed until 11.50 am when the wind stabilised at 85° and a light 6 knots, which was, however, sufficient to complete the two races scheduled. Today saw a double win from Lyra who now holds a clear lead in the provisional overall classification in front of two Wallycentos, Magic Carpet Cubed and Tango, who claimed a good second place in Race 3. The same race also saw two boats, Magic Carpet Cubed and J One, take fourth place with exactly the same corrected time, resulting in both being awarded 4.5 points. Interestingly, J One was previously the first of the three Magic Carpet yachts launched by Sir Lindsay Owen-Jones.

German yacht Momo continues to dominate among the Maxi 72s. Successfully defending the championship title she won last year, Momo has racked up wins in each of the three races held thus far. Second place today went to the American Proteus whose tactician, Italian Tommaso Chieffi, judged the wind shift to the left during the first upwind leg perfectly. Sorcha took third place. Michele Ivaldi, navigator on Momo, summed up the great result: "Once again today we made the right choices and were rewarded. From the choice of the sails take with us to the number of people on board, two crew members stayed ashore so as not to weigh us down in the light wind and I think it was the right thing to do. After a decent start - Cannonball was best off the line - we found a good line of pressure on the right and once we rounded the weather mark in the lead, our opponents didn't have had a lot of tactical options to pass us."

Velsheda won among the Super Maxis and takes the lead in the provisional standings on equal points with Topaz, another J-Class yacht which came second today. Peter Holmberg, helmsman on Topaz, commented: "We sailed well and we went for everything we could, but we had a problem with the mainsail halyard five minutes before the start so we were in recovery mode and when Velsheda is ahead we can't get past her unless they make a mistake. We changed the jib and gained a little, but it wasn't enough. The forecast is for more wind over the next few days, so we'll be able to try the boat in a bigger breeze. It'll be fun."

In the Maxi class the victory of the day went to Vera - the former My Song - owned by Argentinian Miguel Galluccio, who is assisted in the cockpit by veteran VOR skipper Bouwe Bekking and Laser sailor Michele Regolo. The Southern Wind 82 Grande Orazio, owned by YCCS member Massimiliano Florio, remains at the top of the overall classification.

In the Mini Maxi 1 division Supernikka stays in the lead of the overall classification with a second place today ahead of Wallyño, but the win of the day went to Aldo Parissotto's Oscar 3. J/24 world champion and tactican on board Oscar 3, Andrea Casale commented: "This win takes us from fifth to third place, sailing here in Porto Cervo is always special, the wind funnels in between the islands and provides tactical opportunities that you only get here. The first offset mark was decisive, then the rest was a battle to get closer to our adversaries who are faster in real time, making the most of our potential in today's medium-light conditions which were ideal for our boat."

In the Mini Maxi 2 division Riccardo De Michele's H2O continues to dominate ahead of Giuseppe Puttini's Swan 65 Shirlaf which took an excellent second place once again today. Lorenzo Bodini, tactician on H2O: "The first day had the right conditions for us and we won but with a tight margin. Today with lighter air it was more difficult but we managed to limit the number of manoeuvres. Then the drop in the wind at the end increased our lead on the boats behind us and we managed to take first place. Tomorrow we will have windward-leeward races, we've studied how to handle the number of manoeuvres required on those courses, the boats in this class are more cruising oriented and aren't equipped like the racing ones."

Tomorrow at 9 a.m. the daily weather briefing by Quantum Sails will be held in Piazza Azzurra. The first start is scheduled for 11.30 with a breeze from east - southeast of approximately 8 to 13 knots.