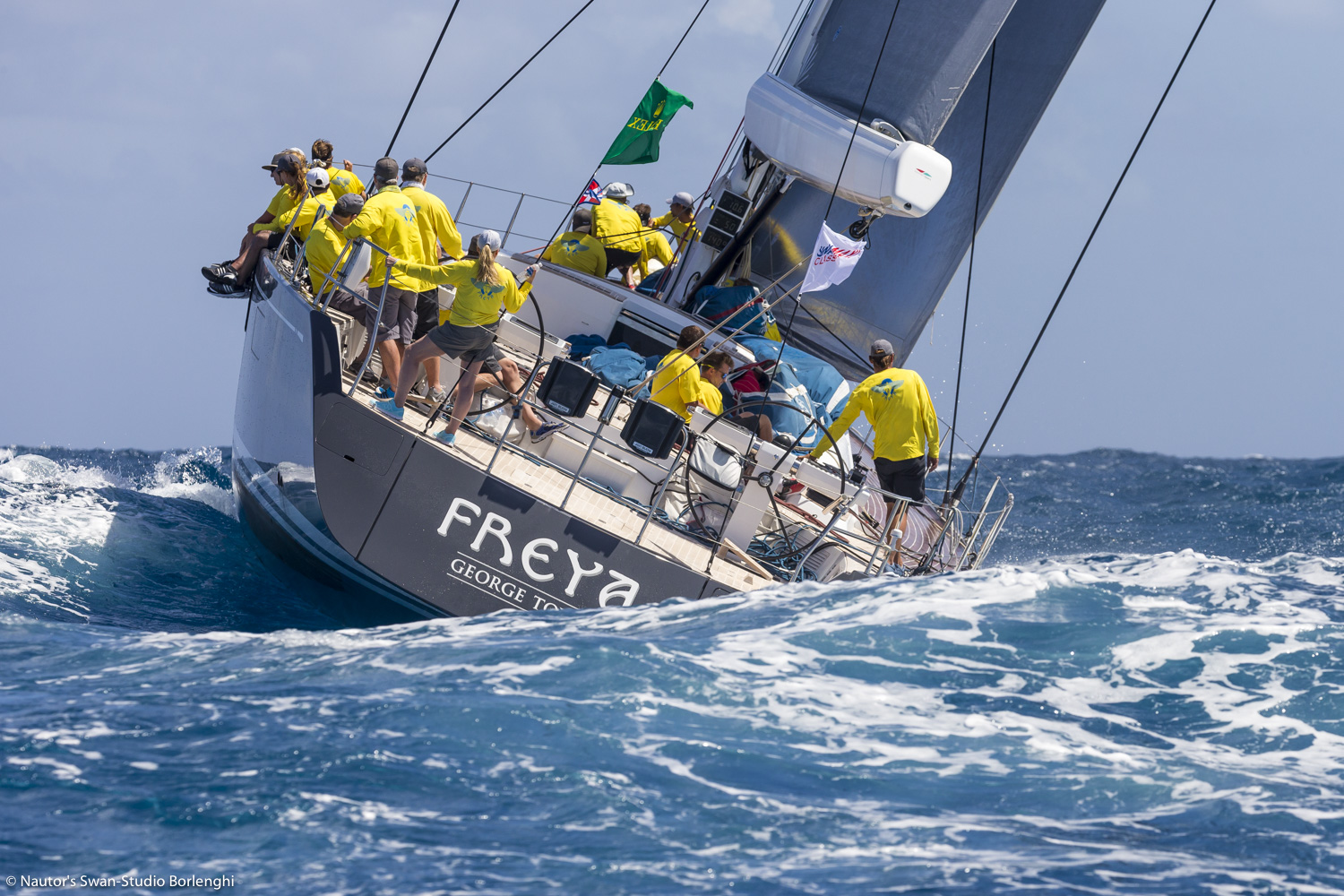 After a stunning start to proceedings in the third edition of the Rolex Swan Cup Caribbean yesterday, the fleet of Nautor's Swan yachts gathered in Virgin Gorda for the event enjoyed equally exciting conditions as they completed today's round-the-island race. A steady easterly of approximately 18 to 20 knots ushered the fleet around the course with the two competing Clubswan 50s completing the clockwise circumnavigation of Virgin Gorda in little over two and a half hours. With two races now run, both the Swan 90 Freya and Leonardo Ferragamo's Clubswan 50 hold tight to their leads at the top of the Maxi and Mini Maxi/Grand Prix divisions respectively. Racing in the event, organised by the Yacht Club Costa Smeralda in collaboration with Nautor's Swan and title sponsor Rolex, will continue through Sunday 5th March.
In the Maxi division B5 took an early lead but suffered an equipment failure early on which forced her to withdraw for the day. Don Macpherson's Freya consequently found herself at the front of the fleet and refused to relinquish her lead for the remainder of the race, finishing with a comfortable lead over Plis-Play in second place and Selene in third. With two consecutive victories under her belt Freya, division winner in the 2016 edition of the Rolex Swan Cup in Porto Cervo, now sits three points ahead of both Plis-Play and Selene.

The two spanking new Clubswan 50s continued to put on a spectacular show as they duelled their way around the course. And while it was German boat Earlybird that crossed the finish line first in real time yesterday, today Ferragamo's Cuordileone claimed line honours in addition to her second victory in corrected time.

Among the Mini Maxis, meanwhile, the American Swan 66 Bounty led the dances for the duration followed by Gryphon and Best Buddies. The smallest yacht in the fleet at 44 feet, the Ron Holland designed Best Buddies is sailing in the Caribbean edition of the Rolex Swan Cup for the first time although she has participated numerous times in the Porto Cervo edition and is a former division winner in the Rolex Middle Sea Race.

Crewed by a pool of friends and family, Best Buddies has been with owners Kay-Johannes and Susann Wrede for almost 20 years - with the exception of a short hiatus in which she was sold, rediscovered by chance by the Wredes in poor condition some years later and then returned by them to her former glory, upon which they vowed never to be parted from her again. With an emphasis on fun but a history of winning and placing in top international regattas, Best Buddies is perhaps one of the participating yachts that best sums up the spirit of the Rolex Swan Cup regattas.

"We've been participating in a few races in the Caribbean and placing well but our final objective was to get here and compete in this event, " explained owner Susann. "There's a special spirit at Swan events. I think it dates back to when Swan was smaller and known for building the most seaworthy yachts ever and fast and elegant; now they are even more elegant and bigger but the spirit is still there, it's a Swan family and it's just so much fun. This is a strong boat and she really is part of our family."
Owners and guests will enjoy the exclusive hospitality offered by Rolex this evening as they attend a special Owners' Party at the newly-reopened YCCS Clubhouse.

Racing is scheduled to continue tomorrow, Saturday 4th March at 12 midday with 16 to 18 knots of easterly breeze forecast.