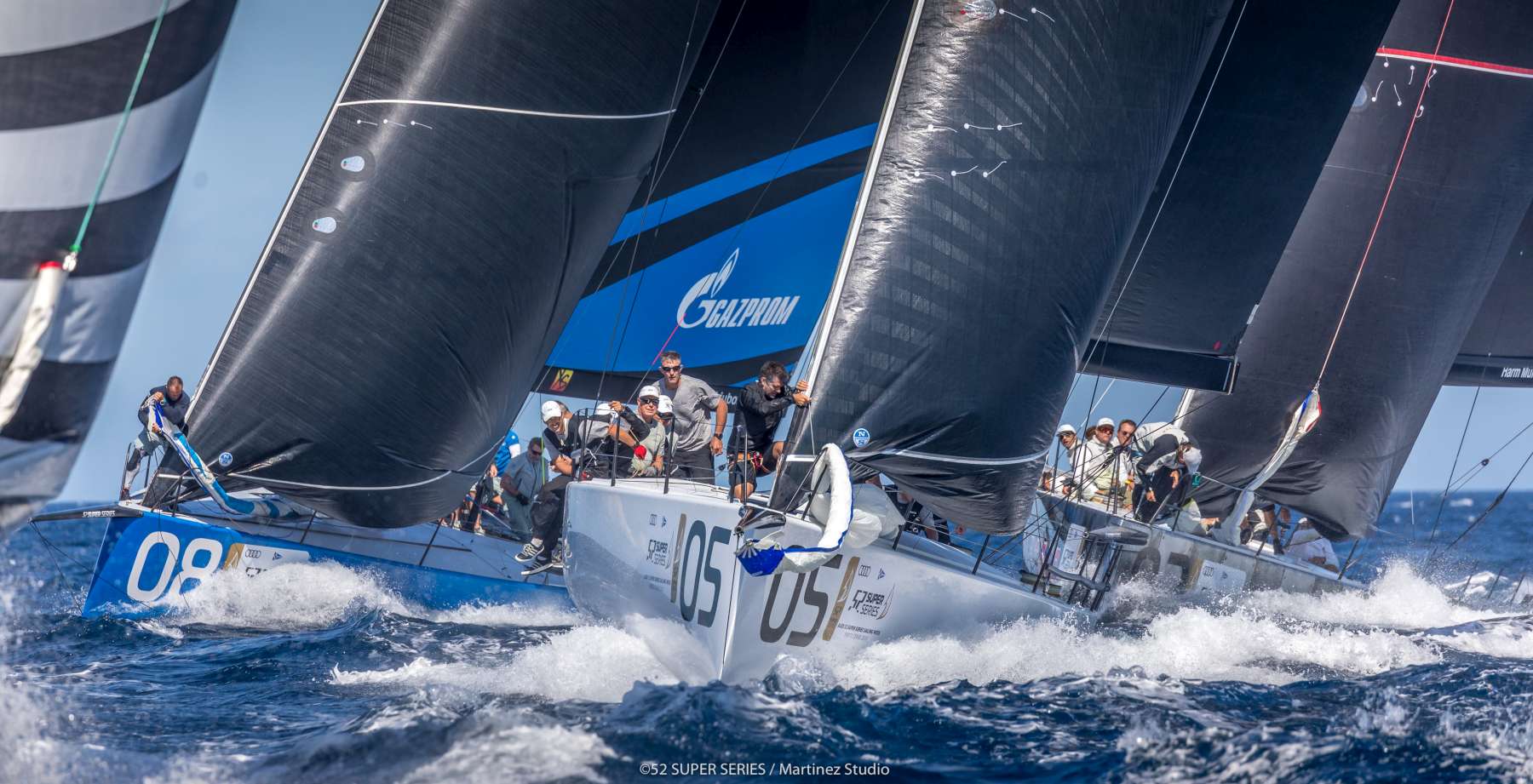 Porto Cervo, 25 September 2019. Typical Sardinian weather conditions with sunshine and a mistral wind made for a lively first day of the Audi 52 Super Series Sailing Week. The event, organised by the YCCS with the support of title sponsor Audi, sees Sled lead the classification followed by Azzurra and Bronenosec.

After racing had to be cancelled yesterday, three windward leeward races were completed today on the race course off Porto Cervo, with a mistral that built from an initial 16 knots to gust at up to 24 knots in the second race, and drop to 22 in the final race of the day. The fleet put on a great show on the waters of the Costa Smeralda, with tight and compact racing complete with a healthy dose of surfing and crowded mark roundings.

At the top of the provisional classification is Sled, the boat that dominated the first race of the day, took second place in the next race, and sixth in the last. In second place is Azzurra - the boat flying the YCCS colours - which after the placing third and fifth respectively in the first two races, concluded the last race in second place, having led the fleet for the duration alongside Bronenosec. On the approach to the finish line the Russian team gained the upper hand, claiming victory and, together with a fourth and a tenth place in the previous races - took the third slot in the provisional classification.

At the end of the first day of competition on the water, there is very little between the boats in a classification which sees Bronenosec on equal points with the three boats behind them. These are, in order, Alegre, winner of the second race of the day, Quantum Racing and Phoenix 11, who both placed third in the second and third races of the day.

Adam Beashel, tactician on Sled: "In the first race we immediately jumped to the front of the fleet and managed our advantage in a fairly simple way. In the second we were behind Quantum, then we recovered and the finale with Alegre was very exciting. In the final race the guys did a beautiful job of recovering, we were penultimate at the first windward mark and we managed to finish the race in sixth. For tomorrow the weather forecast gives more wind, of course we want to race, we'll see what happens."

Guillermo Parada, helmsman of Azzurra: "It was a beautiful day, typical of the Costa Smeralda, it wasn't as windy as we expected, we recorded wind from 18 up to a maximum of 24 knots, we had a lot of fun. In the third race we were ahead the whole time but in the end Bronenosec got past us by a whisker. Today the forecast gave more wind, and it's the same for tomorrow, as always we will keep an eye on how the weather develops. We hope to compete and have some good races. Our objective over the coming days is to stretch the lead over our opponents."

Alberto Barovier, skipper on Bronenosec: "The boat is very fast and we are satisfied with its performance in these weather conditions as well, the team is working very well. Over the course of the season we have placed second, third, fourth, this is the time to aim for a first place. And that's what I told the guys at the beginning of the week: we shouldn't think about the overall standings, we should try to win this event and finish the season in the best possible way."

The regattas will continue tomorrow with the first starting signal scheduled for 12 noon CEST and the forecast is for wind from the west of 18 to 22 knots.