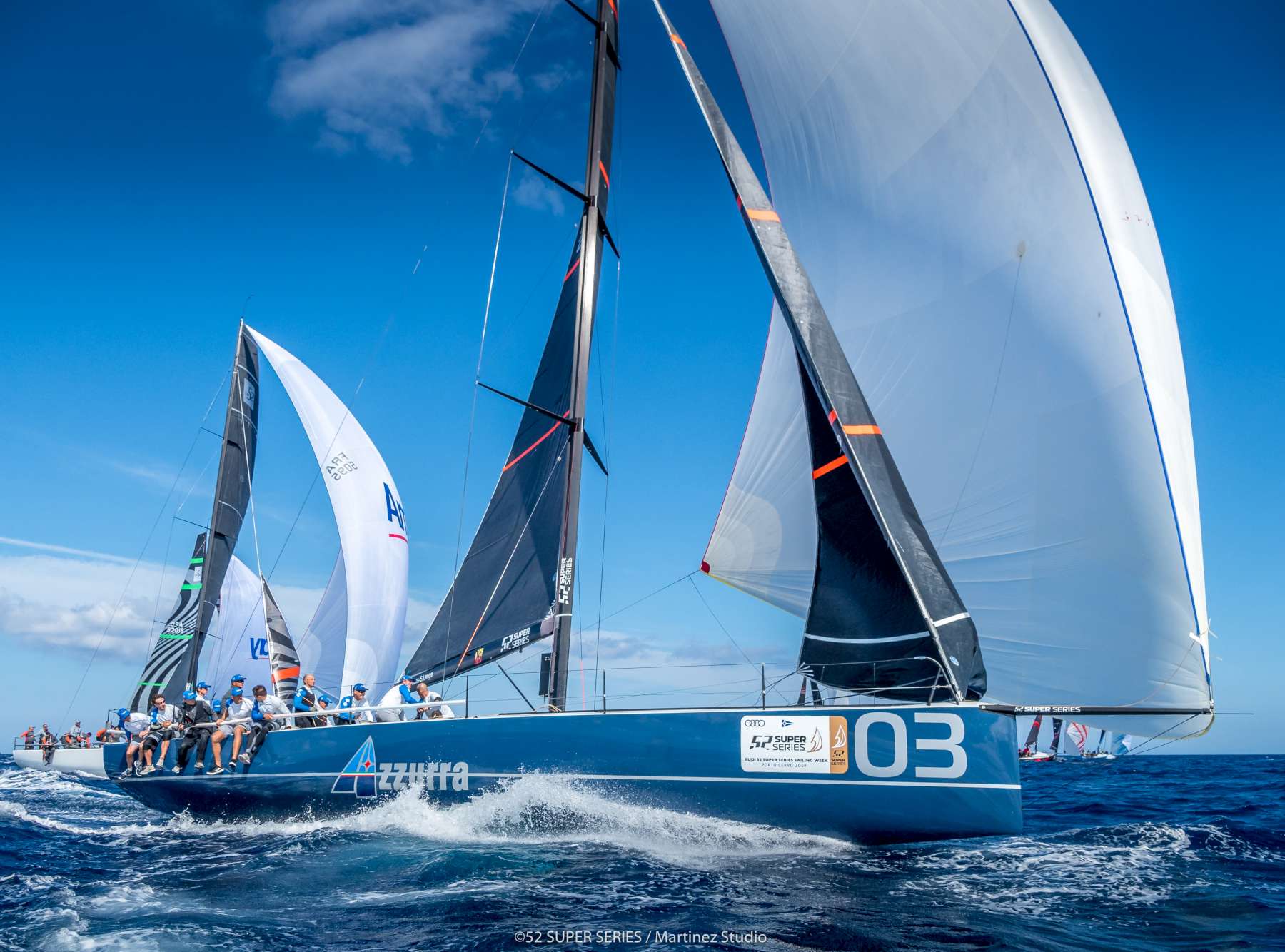 Sled triumphs in the Porto Cervo leg. Azzurra takes second place and is crowned champion of the 52 Super Series circuit

Porto Cervo, 28 September 2019. The final day of the Audi 52 Super Series Sailing Week, an event organised by the Yacht Club Costa Smeralda (YCCS) with the support of title sponsor Audi, was a thrilling one. Over the course of the week nine windward-leeward races were completed in total, and the overall classification saw Sled triumph by a wide margin over her closest rivals. Azzurra took second place ahead of Quantum Racing in third. Today also brought the general classification of the circuit to a close, with Azzurra claiming the title of champion of the 52 Super Series 2019. Azzurra flies the YCCS burgee and is owned by club members the Roemmers family.

This morning at 11 a.m. the 10 teams participating in the event gathered on the starting line for the first race of the day. Three windward-leeward races were held, with a mistral wind blowing at 12-15 knots initially and getting up to 20 knots for the third race.

The American team on Sled, winner of the Porto Cervo leg, rounded off the last day of competition with a sequence of excellent performances, clinching a full house of three wins out of three races, and finishing 19 points ahead of Azzurra in second place. Azzurra today was engaged in a true match race with Platoon, her closest rival in the fight for overall victory in the circuit. With today's results - a third, fourth and sixth place - she managed not only to take second place in the ranking of the Audi 52 Super Series Sailing Week, but also claimed the title of champion of the 52 Super Series 2019 for the fourth time. On the third step of the podium was America's Quantum Racing, owned by YCCS member Doug DeVos, who today notched up two second-place finishes and a sixth.

Don Cowie, mainsail trimmer on Sled commented on the victory: "The owner is very happy, we are very happy. The guys did a great job, the shore team was also a great help. We raced very well, with excellent starts and the whole team did really great work. It's been a great week for us! For five years now we have been sailing together and during that time we've gotten to the third step of the podium three times. This is the first time we've won!"

Pablo Roemmers, owner of Azzurra: "It has been a long season in which, although we have never won an event, we have consistently achieved good performances - concluding four events in second place, very close to the winning team. Consistency paid off in the end! Every day we tried to improve little things, at times the sails, at others the tuning of the boat or the speed and I really believe that being consistent has been the key to success. I'm really happy to celebrate today, especially because we're at my own club. In addition, today is also the 52nd birthday of our skipper - Guillermo Parada - one more reason to celebrate the victory in the 52 Super Series. Racing on home waters is always a source of tension because all eyes are on us, including those of our friends at the YCCS. We must also congratulate Sled on her victory in this event with so many first places, maybe tomorrow we'll try to figure out what they did that we didn't do!"

Doug DeVos, owner of Quantum Racing: "The mood is positive, we sailed well, over the course of the season we have improved, including in this event. We have talked a lot about how to perfect our performance, this sport is very difficult and the challenge is to learn more every day. You never know how these races will turn out, I think about how many we have raced over the season and in the end only a couple of points separate us from our competitors. The results we have achieved give us the motivation to work hard to prepare for next season."

Riccardo Bonadeo, YCCS Commodore: "Every time the 52 Super Series visits Porto Cervo it's an incredible occasion. This year it was an even more intense experience, both because the event closes the YCCS season and because Azzurra, the boat that represents the club, was racing to clinch the title of circuit champion, which happily she managed to claim. I want to thank the Roemmers family for their dedication to this sport and the entire crew of Azzurra for their consistency and tenacity over every leg of the circuit. Thanks must also go to Audi, partner of the event, and the Race Committee, the international jury, and the YCCS staff for their professionalism and organisation, essential elements for the success of events like this."