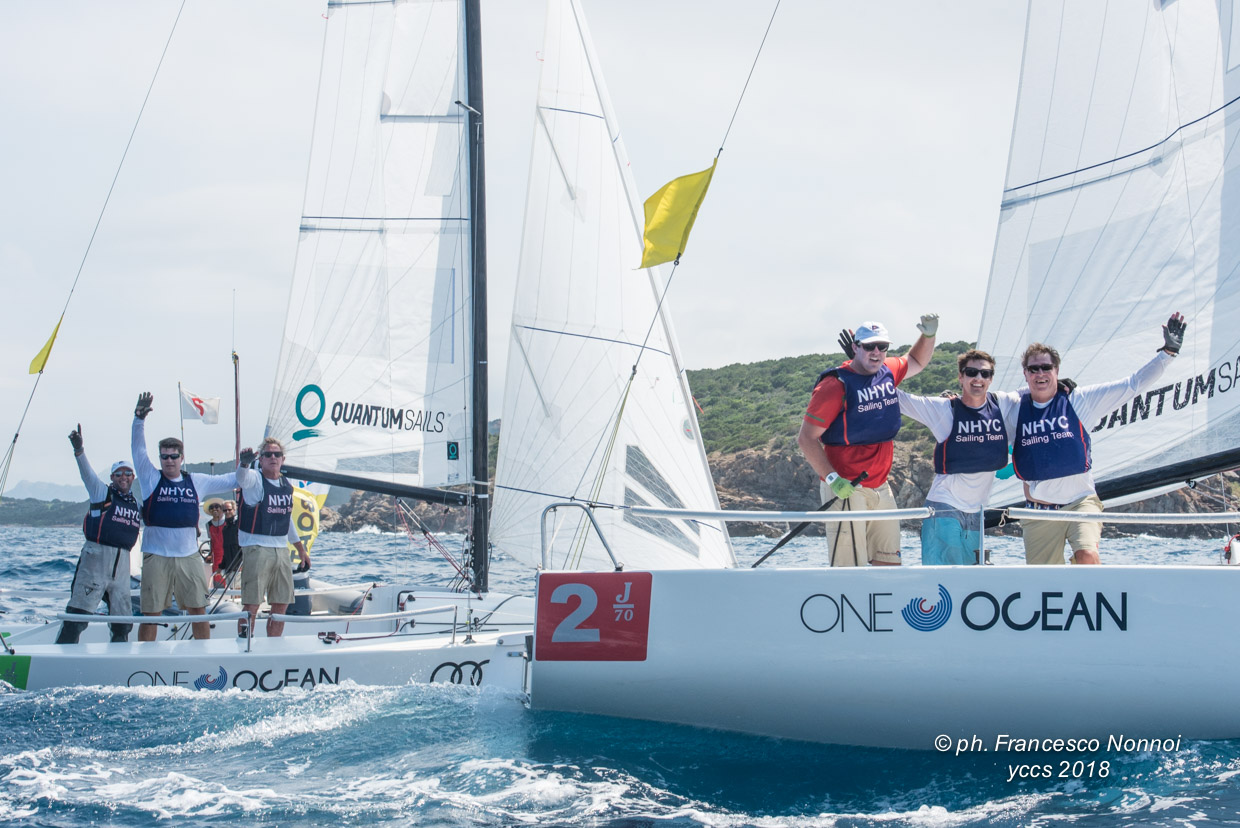 This morning after the usual briefing and group picture at the YCCS Clubhouse, the Race Committee went out on the water to assess whether conditions would permit the scheduled start today. Waves of 1.5 metres and 18-20 knots of westerly wind meant racing had to be postponed until the breeze settled at about 3 p.m. The finalists then proceeded with racing to decide the top podium finishers.

Newport Harbor Yacht Club, led by Justin Law and Mac Mace, faced the home team from YCCS (skippers Antonio Sodo Migliori and Edoardo Mancinelli Scotti) to do battle for first and second place. Wins in two of their three races brought the Americans to first place ahead of the YCCS. Eastern Yacht Club (skippers Spencer Powers and Stein Skaane) then came up against the New York Yacht Club (Brian Doyle and Will Graves) in a fight for third place which was claimed by New York Yacht Club in consideration of their score in the round robins of the previous days.

At 16.45 the final prize-giving ceremony took place, during which YCCS Commodore Riccardo Bonadeo commented: "These have been three intense days, with a great sporting atmosphere. Congratulations to the winners from Newport Harbor Yacht Club whose tactical ability gained them this victory. We are very pleased to host international teams here racing to represent their respective Clubs, underlining the sense of belonging common to all yacht clubs. My thanks go to all of you who participated as well as the Race Committee, the International Jury, the YCCS staff, our partners and especially our Title Sponsor Audi, which shares our passion for the sport of sailing."

Justin Law, skipper of Newport Harbor Yacht Club, commented on his team's victory: "A fantastic day, the Race Committee did a great job, they were patient and waited for the wind to die down and made the regatta happen. A big thank you goes to my team mates for making this victory possible!"

All teams received the YCCS Burgee as a memento of the event and the winners from Newport Harbor Yacht Club were also awarded a Garmin inReach Explorer + which can be used to send and receive text messages and e-mails in any part of the globe. The highly sensitive integrated GPS high allows localisation and tracking in addition to enabling the tracking function during navigation.

Quantum Sails and Garmin Marine were technical partners of the event.

The next regatta on the YCCS calendar is the Coppa Europa Smeralda 888, from 29 June to 1 July, which will be disputed aboard the Smeralda 888 craft designed by naval architect German Frers for the Club.