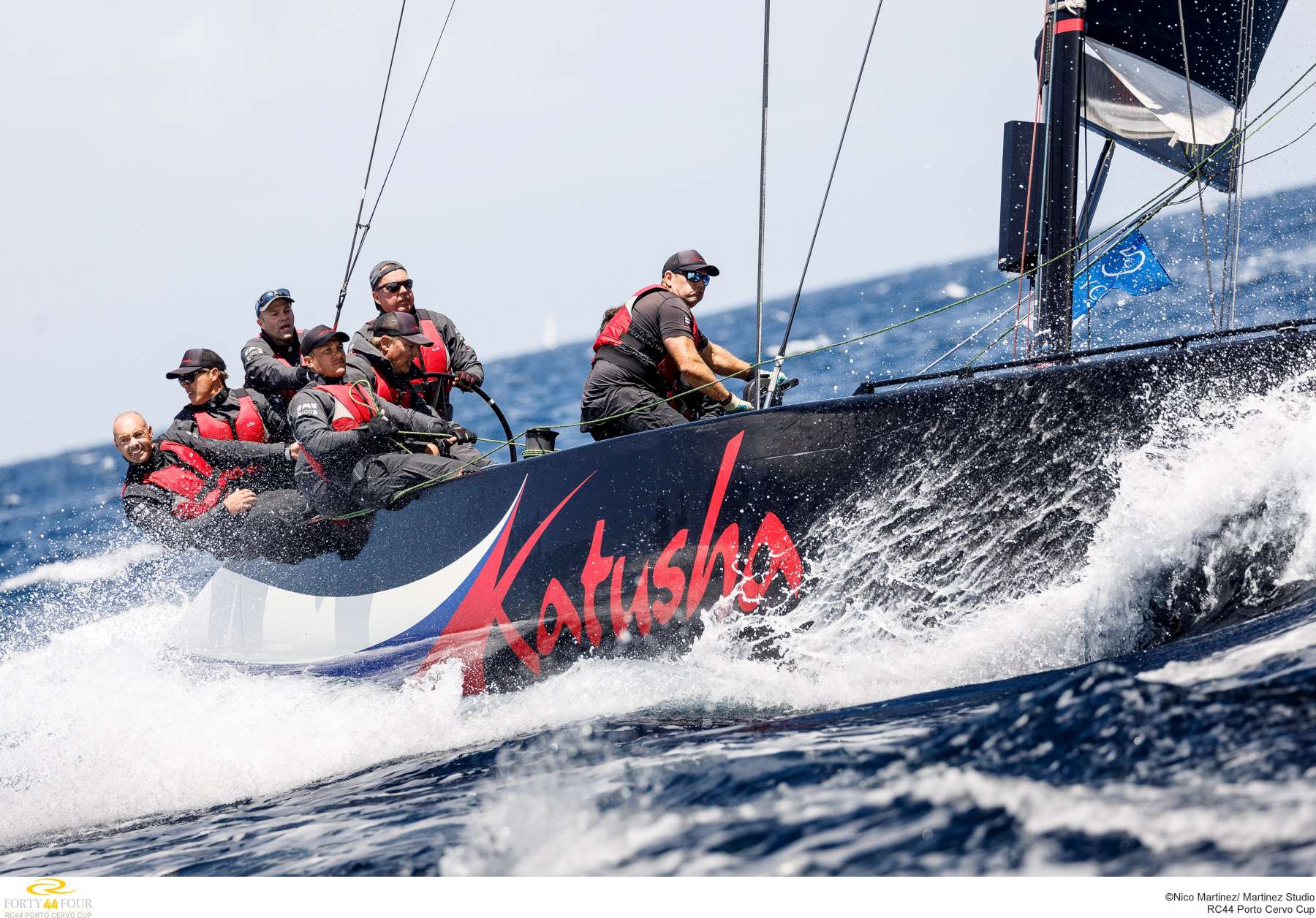 Porto Cervo, 2nd July 2017. Two years of dedication to the RC44 class paid off today for Russian Alexander Novoselov, his American tactician Andy Horton and the crew of Katusha, winning their first ever event on the RC44 Championship.

Sardinia's Costa Smeralda has offered the full range of conditions for the nine teams competing at the RC44 Porto Cervo Cup this week from the very light to the very strong. Today was the latter. While Saturday was lost to the 30-40 knot winds of the Mistral, big conditions on Sunday continued but were just sailable, albeit at the very upper limit of what the RC44s and their crews can endure.

While they went into today's three races with a two-point lead, Katusha immaculately consolidated her position by posting a 1-2 in today's first two races. Baring their receipt of a penalty, this left the Russian RC44 winning the Porto Cervo with a race to spare - something that very rarely occurs in this hotly contested owner-driver fleet.

It was a day of mixed fortunes for Nico Poons' Charisma, which broke a runner in the first race - an incident that also saw tactician Morgan Reeser go swimming. Having so nearly winning two races earlier this week, finally their luck held in race two in which they claimed the bullet. But once again this so nearly didn't happen thanks to a last minute, head down dash for the line with Katusha and having a chunk taken out of their transom collision by Peninsula Petroleum in a misjudged duck that left them having to take time out to bail between races.

Alexander Novoselov, Katusha owner-driver, said: "I have been sailing with this class for two years and it has taken us two years not only to get on the podium but to be the winners. We felt good today, we had a nice atmosphere on board, we stayed very concentrated and we enjoyed the competition from the other teams. The Porto Cervo Cup has been fun and we had good weather, so this is one of the best venue for sailing I've visited. I am excited that we have been lucky. "

Today's final race was won by Igor Lah's Team Cereef which once secured the Slovenian team second place after this had nearly slipped through their fingers after they had finished ninth following a poor start in the penultimate race.

Following this event, organized by the Yacht Club Costa Smeralda, John Bassadone's Peninsula Petroleum has taken the lead of the 2017 RC44 championship and with this has recovered the coveted 'golden wheels', the class' equivalent of cycling's yellow jersey.

Riccardo Bonadeo, Commodore of the Yacht Club Costa Smeralda, commented: "After yesterday's strong wind that left the boats on the dock, today's Mistral has highlighted the RC44s performance. We saw very competitive races with unpredictable results. In few words, we had a week of the best sailing. Thank you to RC44 Class for returning to sail with us for the fourth time and after this leg here in Porto Cervo, we hope to see you again in our Caribbean home in Virgin Gorda. Thank you to the owners and the teams, the PRO Peter 'Luigi' Reggio, the Race Committee, the International Jury and to all the RC44 and YCCS teams."

The next event scheduled at the Yacht Club Costa Smeralda is the Rolex Farr 40 Worlds from the 13th - 16th of July.
See all the daily news, event programme, results, official documents and photos from the regattas on our website and via social media using #yccs #yccs50.