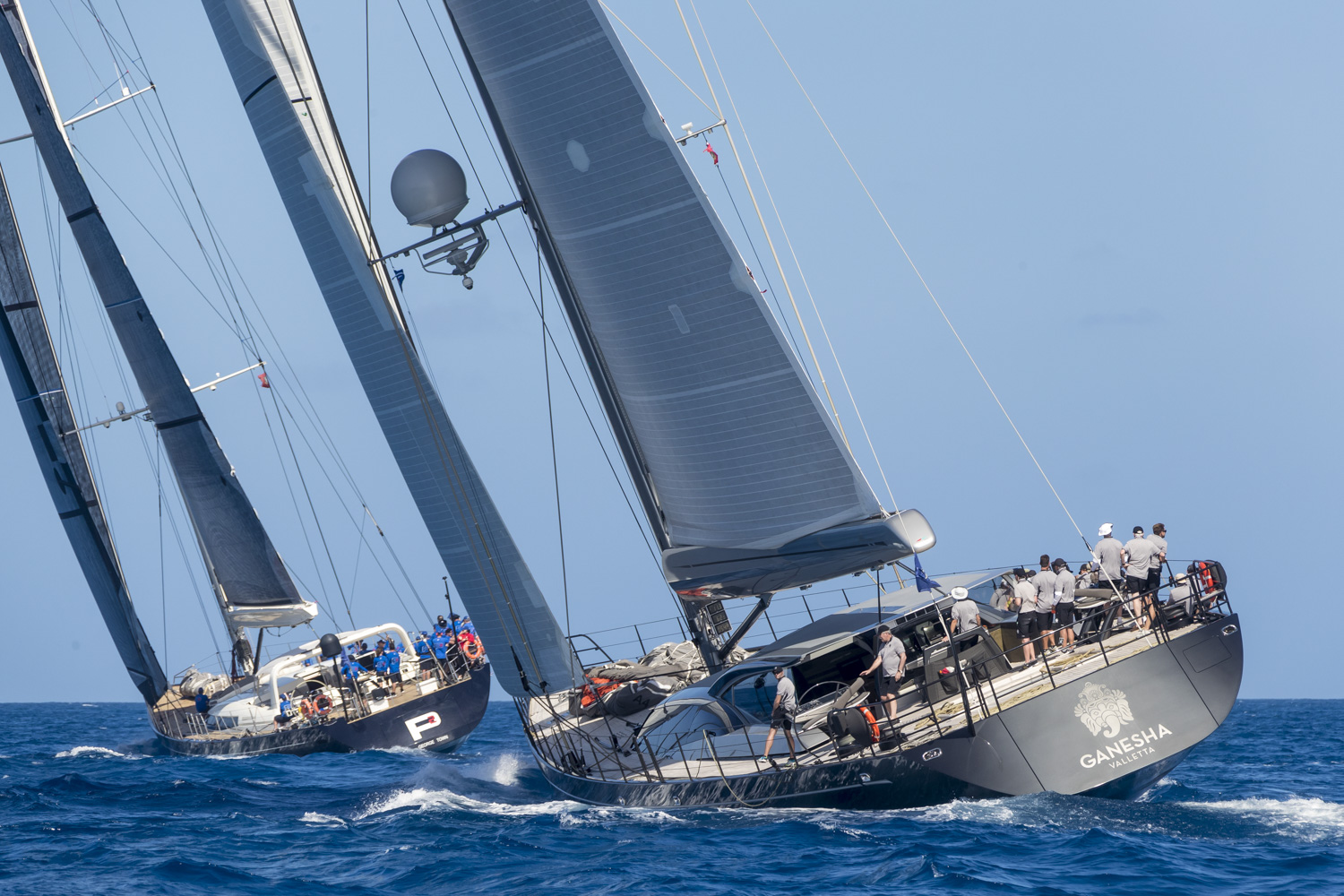 After some three hours of racing the 38m (124-foot) P2 held off the 46m (150-foot) Ganesha by half a boat length to win Class B in spectacular fashion. A mere 22 seconds separated the two superyachts on corrected time.

The course featured a lot of reaching and that played nicely into the hands of the crew aboard Perseus^3. The 60m (196-foot) design by Ron Holland and built by Perini Navi was launched in 2015 and today won its first ever race.

"We're really excited," said crew boss Peter Grimm. "Perseus is a legitimate racing boat even though it's got a grand piano inside of it. We've been sailing with the same core of 20 guys for two years now and it makes a difference to have the same crew."

In Class A and Class C familiar names found their way to victory. Nilaya, the Reichel/Pugh-designed 34m (111-foot) from Baltic Yachts that won overall last year and in 2014, had no trouble with its two competitors in Class A. In Class C it was the defending champion Freya, the 27m (90-foot) sloop designed by German Frers and built by Swan that won the race.

"We did the Swan Cup last week down here so this is our second week of sailing," said tactician Kimo Worthington, a veteran of the Volvo Ocean Race. "We're a pretty polished crew and have a nice team in the back. We sort of knew what was going to happen. We got a clear lane and a couple of things happened and off we went."

The race committee set a short 2 nautical mile beat to begin the race and then it was off to the reaches, twisting and winding around the Dog Islands, past Scrub Island, and down to the proximity of Fallen Jerusalem Island before heading back towards the finish, but not before another pass through the Dog Islands.

The race was sailed in a spectacular wind of 10 to 15 knots that ranged in direction from 110 to 130 degrees, east/southeast. The course was designed with the intention of giving the fleet 25 percent upwind work, 25 percent downwind work and 50 percent reaching work.

It was the reaching work that allowed boats such as Perseus^3 to claim a victory. The largest boat in the fleet with the world's third tallest carbon fiber mast at 287 feet and the world's largest single sail, its A2 spinnaker, isn't the easiest boat to maneuver on the water but today's course played into its hands.

"There was a lot of reaching so we were able to use our outboard leads and we turned the corners flawlessly and did everything we needed to do to get around the course," said Grimm. "We practiced for three days before this regatta in a lot of wind, 20 to 26 knots, but with today's wind being 12 to 14 knots we executed some flawless maneuvers."

The battle between P2 and Ganesha is well worn. The two have traded jabs on the superyacht circuit for a couple of years. Today's wind strength favored P2 because it is 100 tons lighter than Ganesha and was more nimble through the light, transitional phases of the racecourse. But the racecourse layout favored Ganesha because of all the reaching; it could put its bow down and leg out a bit.

After the two crews finished within half a length of each other, Ganesha tactician Matt Humphries said the superyacht rule is working well.

"The rating system is working well between the two boats. To finish a race like that with P2 isn't strange. It always seems to be that way," said Humphries, who's also a Volvo Ocean Race veteran. "You see the nature of the fleet and the types of crews on the boats and the level is high and the competition is high. The boats get more and more refined. When we first started sailing superyachts 8 or 9 years ago it was quite different, different in the way we would handle them. The Superyacht Rule makes sure we do sail these boats in a secure way. It works very, very well. For sure, it's some of most competitive racing you can do."