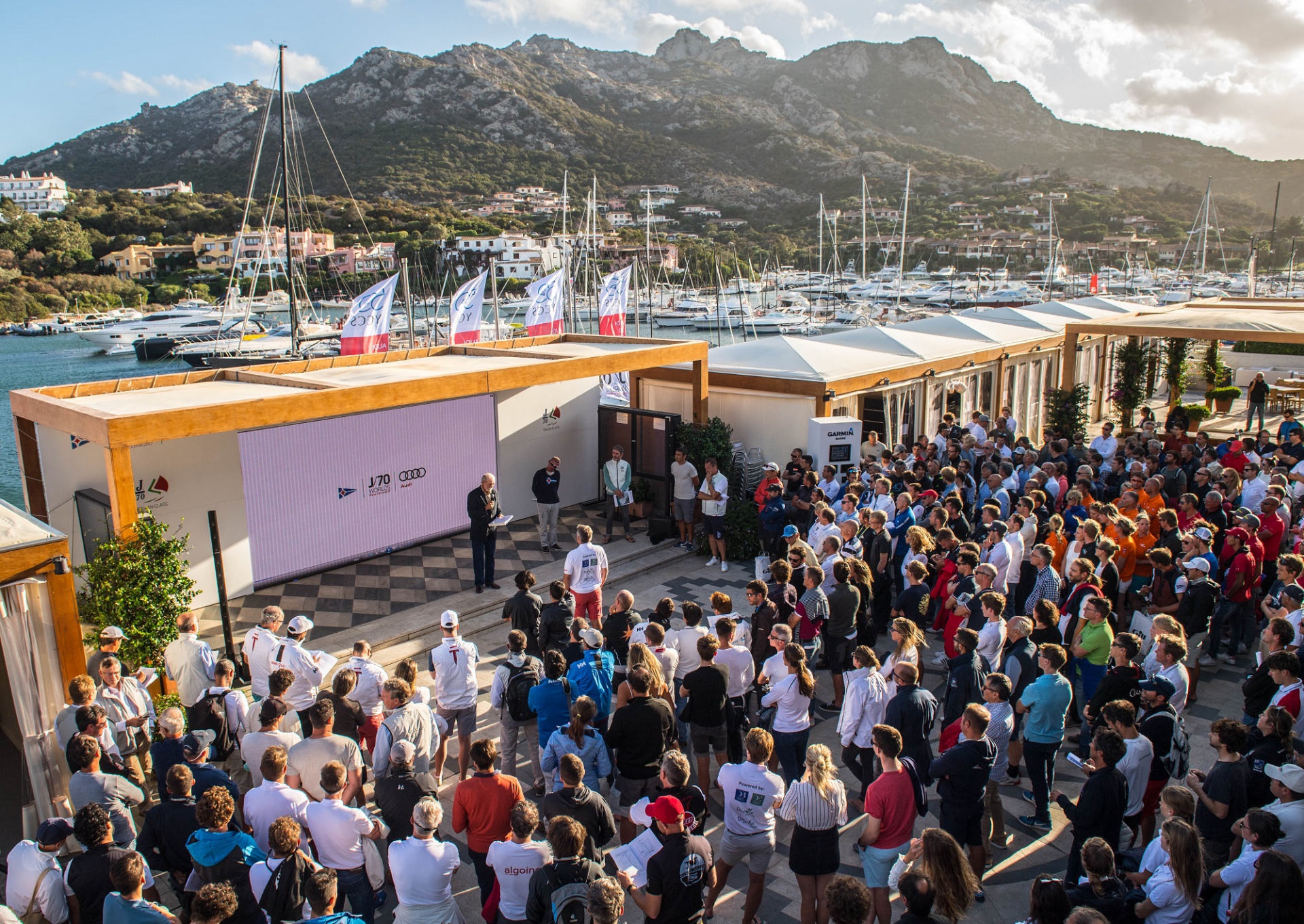 Porto Cervo, September 11, 2017. 171 teams representing 24 different countries, will be participating at the Audi J/70 World Championship, organized by the Yacht Club Costa Smeralda in collaboration with the Title Sponsor Audi and the Official Sailmaker Quantum Sails. This will be the fourth edition of the World Sailing recognised J/70 World championship, and the first time that the championship has come to the world renowned sailing grounds of the Costa Smeralda, Sardinia.

Since the J/70 was introduced in 2013, over 1400 boats have been sold worldwide, making the thrilling sportsboat, the fastest growing One Design class in sailing history. The extraordinary size of the world championship fleet is unprecedented, with a depth of quality which is just as profound. Over 500 sailors will be taking part, including Olympic Gold medallists, winners of the America's Cup, and world champions from the world of sailing.

Italy has the largest contingent of entries by country, 40 teams with Italian skippers will be taking part, boasting world class sailors from many disciplines. Representing Yacht Club Costa Smeralda and Audi ambassador, Claudia Rossi will be amongst the favourites to win the world title. Claudia has won the J/70 European title on the last two occasions, and placed fifth at the 2016 J/70 World Championship. The list of world class Italians competing literally runs of the page; Carlo Alberini was runner up at the 2015 J/70 Worlds, one of the world's best Star sailors, Diego Negri, will be racing with Luca Domenici. Vasco Vascotto will be calling tactics for Farr 40 World Champion Alberto Rossi, father of Claudia. America's Cup former competitor Vincenzo Onorato, has Cameron Appleton as tactician, and Vincenzo's son Achille, will be racing with Francesco Bruni. The Italian family dynasties racing include four members of the the Loro Piana family; Pier Luigi, Pietro, Giacomo, and Franco.

12 teams will be competing from Spain, including Josè Maria Torcida, with a crew including Rayco Tabares. Between them they have won the J/80 World Championship on five occasions, and the highly regarded Spanish team, was a very close second to Claudia Rossi, at the 2017 J/70 European Championship. From Brazil six teams will be racing including, multiple J/24 World Champion, Mauricio Santa Cruz. From Malta, skipper Johnathan Calascione will have Sebastian Ripard on the helm with John Ripard also in the crew, the Maltese team came fourth at the 2017 J/70 European Championship.

31 teams will be competing from Germany, many of which qualify for the Corinthian title including; Phil Mecklenburg, Klaus Diesch, Björn Beilken, Margale Rudiger and Jurgen Waldheim. Of the German non-Corinthian teams, veteran sailor and multiple world champion, Christian Soyka is one of the most experienced sailors from Germany. Leopold Fricke is Swiss National Coach for the Olympic 49er FX class. World Class Match Racer, America's Cup sailor and 11 time Ice Sailing World Champion, Karol Jablonski from Poland, will be calling tactics for Pit Finis.

The YCCS Commodore, Riccardo Bonadeo said: "The Yacht Club Costa Smeralda is proud to be organising such an impressive world championship, especially this year as the Club celebrates its 50th Anniversary. We are delighted to welcome competitors from all over the world, to enjoy the fantastic sailing conditions. Fair winds to all competitors at the Championship."