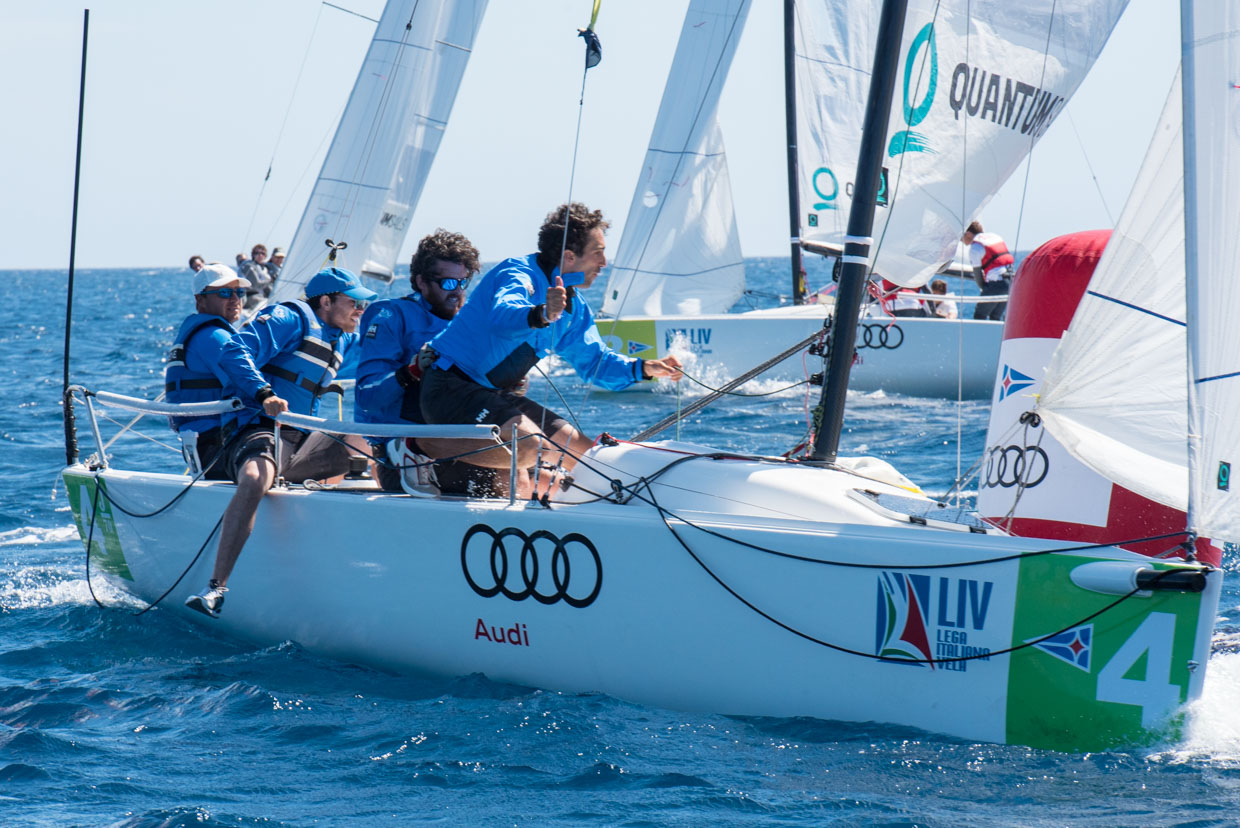 Porto Cervo, Italy. 21st May 2017. With 11 first places, a second place and a third in 13 races run, the Circolo Canottieri Aniene with Lorenzo Bressani at the helm (crew Luca Tubaro, Umberto Molineris and Matteo Mason) claimed victory in the Audi - Italian Sailing League. The event represented the first round of 2017 selections for the Italian Sailing League and was organised by the Yacht Club Costa Smeralda (YCCS). After racing was cancelled yesterday due to a Mistral wind blowing at over 40 knots, conditions today allowed 18 races to be held, bringing the total number completed to 26.

"We are very pleased with this first round of selections,” commented Roberto Emanuele de Felice, President of the Italian Sailing League. “The conditions kept the teams and the organisers the Yacht Club Costa Smeralda busy. Our thanks go to the YCCS for their work at sea and the splendid hospitality on land. We now have the first qualified teams for the final in Crotone and what is really apparent is how much the quality of the sailors and the racing has risen in just one year. This is a very positive sign for the future and for the role that the Italian Sailing League plays at an international level. Congratulations to Aniene for the resounding victory, to Ravenna for never abandoning the fight for first place and to 3V for such an intelligent debut with a team of well-trained and determined young athletes.”

"We battled against Ravenna.” declared winning helmsman Lorenzo Bressani of Circolo Canottieri Aniene. “We knew they were our closest rivals but we were able to win with a good margin and I’m particularly happy about that as it means we have started the season on the right foot.”

“The CCA takes the Sailing League season very seriously,” explained Vice President of the Circolo Canottieri Aniene, Francesco Rocco. “We fielded a team that will also compete in the European qualifiers for the next Sailing Champions League. We built the team using athletes from diverse disciplines such as the 49er and Nacra and with experience of offshore boats.”

The next leg of the Italian Sailing League is scheduled for July in Portopiccolo (Trieste, Italy) where the full line up for the national final in Crotone – also valid as the National Championship for Clubs - will be decided.

"This first event provided spectacular racing in challenging conditions, with strong wind on the first day and medium and unstable wind on the third day,” commented Vice President of the Italian Sailing League Alessandro Maria Rinaldi. “The League’s formula foresees a large number of short, intense races which allow the teams to repeat starts and manoeuvres dozens of times. This is great practice for expert sailors and an excellent opportunity for new teams to find the right balance for future events. The J/70 boats have proved to be very suitable, agile and fast in all conditions, making the Italian Sailing League a spectacular platform bringing fast and thrilling racing to the world of sailing.”

Riccardo Bonadeo, Commodore of the Yacht Club Costa Smeralda confirmed: “We are pleased to have hosted the second edition of the Audi-Italian Sailing League. Today was an intense race day and the event has proved once again to be an exhilarating one. I would like to thank the Italian Sailing League, the Race Committee, Jury, Umpires and YCCS staff as well as the title sponsor Audi and all the teams who travelled to Porto Cervo for the occasion.”

Audi is Title Sponsor of the event and Quantum Sails and Garmin Marine are Technical Partners.

The YCCS sporting calendar continues with the much awaited Loro Piana Superyacht Regatta from 30th May to 3rd June.

For further information, documents, event programmes, full results and photos visit the event section on our website or contact the Press Office.

For further updates on social media follow the hashtags #yccs and #yccs50.