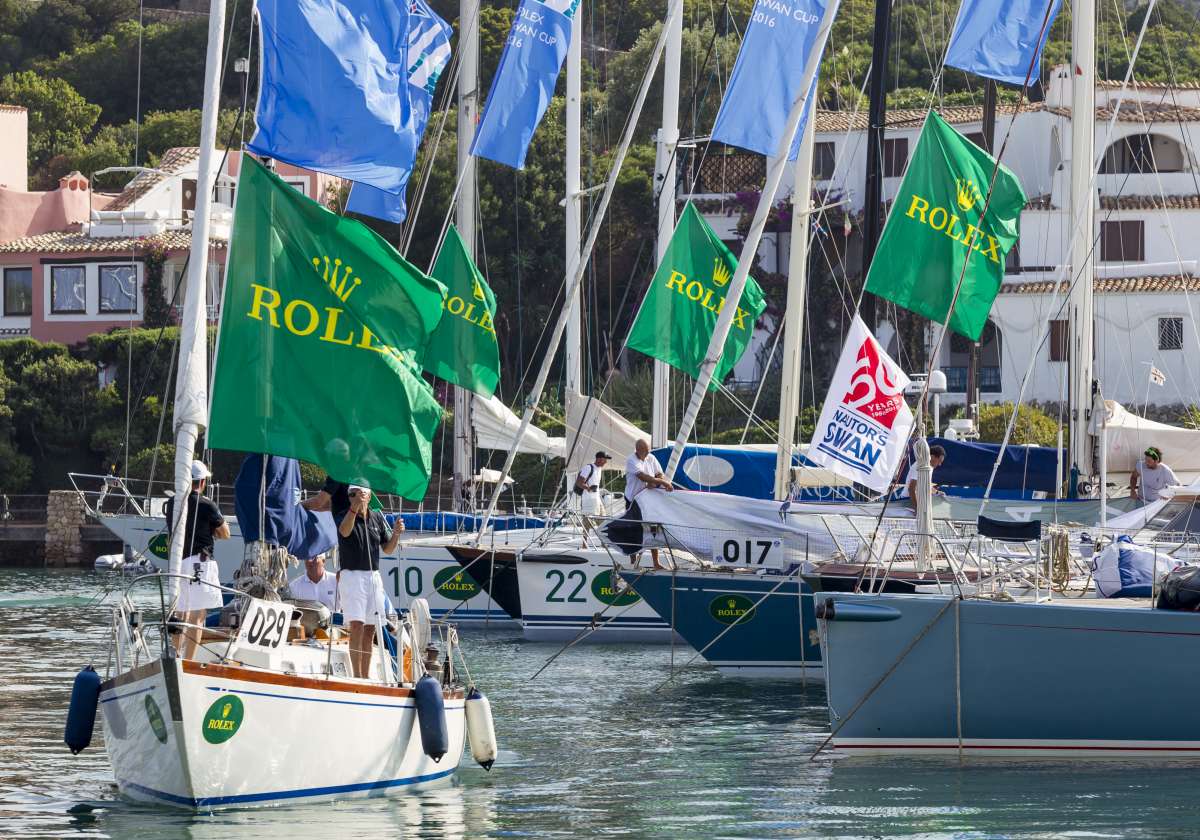 Porto Cervo, Italy. 12th September 2016. Every two years since 1980 a multitudinous and diverse fleet of Nautor's Swan yachts has gathered in Porto Cervo to participate in their biennial rally, the Rolex Swan Cup. Over the years the fleet has grown, the shipyard has launched more than 2000 hulls and new-one design and cruiser-racer models have been added, however the spirit of the Rolex Swan Cup has remained unaltered over the years.

Owners travel from around the world - some with professional afterguards, some with groups of friends crewing the boat - to test themselves against the renowned race course off the Costa Smeralda and against each other. Yet when evening falls the rivalry on the regatta course is forgotten and old and new friends gather to relax at the sumptuous evening events organized by the Yacht Club Costa Smeralda, Nautor and title sponsors Rolex. 2016 heralds a very special edition of the regatta marking the 50th anniversary of the foundation of Nautor's Swan and welcoming a record fleet of 125 yachts.

In the Swan Maxi division all eyes will be on the new Swan 115s Highland Fling and Shamanna, both launched this year. While Irvine Laidlaw's Highland Fling will have ironed out any kinks during last week's Maxi Yacht Rolex Cup, Shamanna will be making her regatta debut at the Rolex Swan Cup.

The Swan Mini Maxi division will see the return of several Swan 60s including Bronenosec and Vertical Smile. 2014 division winner Yasha will also be competing in this category, as will the Swan 601 Arobas, fresh from finishing second in category in the Maxi Yacht Rolex Cup.

The Grand Prix division will play host to the latest launch from the Finnish shipyard, the ClubSwan 50. Designed by Juan Kouyoumdjian, all three hulls launched this year - Sweden's Ladykiller, France's Genapi and Leonardo Ferragamo's Courdileone - will be present for their regatta debut.

The historic Sparkman and Stephens class is the largest of the fleet, hosting 36 classic Swans. Tarantella, the very first Swan yacht ever launched, will be participating and is crewed by the team who originally built her and who lovingly restored her this year.

A fleet of 16 Swan 45 yachts will compete for their World Championship. Four-time winner Earlybird, owned by Nagel and Brandis, will be the boat to beat here. The Swan 42 class, meanwhile, hosts defending 2014 champion Natalia with Branko Brcin on tactics.

While many of the boats field amateur crews, some owners elect to bring in professional sailors to boost their chances of victory. Among the big-names present this week are veterans Ken Read on the Swan 50 Cuordileone and Bouwe Bekking on the Swan 45 Esthec. Germany's Jochen Schuemann will be calling tactics on the Swan 45 Earlybird while Italian match-racer Paolo Cian is on the Sparkman and Stephens Swan 65 Shirlaf.

YCCS Commodore Riccardo Bonadeo: "We are delighted to welcome this record fleet for the 19th edition of the Rolex Swan Cup. This is a special event with a unique atmosphere and it is wonderful to see these beautiful swans from all around the world lined up in the marina. We are looking forward to a week of exciting racing across all of the competing categories as well as some distinctive events to mark the Nautor's Swan anniversary."

Leonardo Ferragamo - Group Executive Chairman: "The Rolex Swan Cup is a synonym for passion, racing, fun and dedication. It is an opportunity for us to share with our owners and our historical partners, Rolex and YCCS, our unique and unconditional love for the sea and for our Swans. And this year, it is most specially the moment in which to celebrate the 50th Anniversary of the Company. We could not find a more auspicious inspiration for our future than the glorious past of Nautor's Swan and its values that are still so fundamental to the brand today."

longside the sporting activities, a full programme of social events is also rostered. Today's opening ceremony at the YCCS will kick things off in style while owners are invited to a gala dinner at the Clubhouse on Friday and a Rolex Crew party will take place on Saturday.

Racing is scheduled to commence at 11.30 a.m. tomorrow, Tuesday 13th September with a coastal course in programme for all divisions except the Swan 45 and Swan 42 one-design classes. Variable winds of 10 to 12 knots are forecast.

During the regatta press releases, photos and video content are available onwww.yccs.com and via the Rolex Pressroom. Live tracking is available via the YCCS website.