THE BOATS IN PALERMO-MONTECARLO HAVE LEFT PALERMO THIS MORNING, RAMBLER IS IMMEDIATELY AHEAD 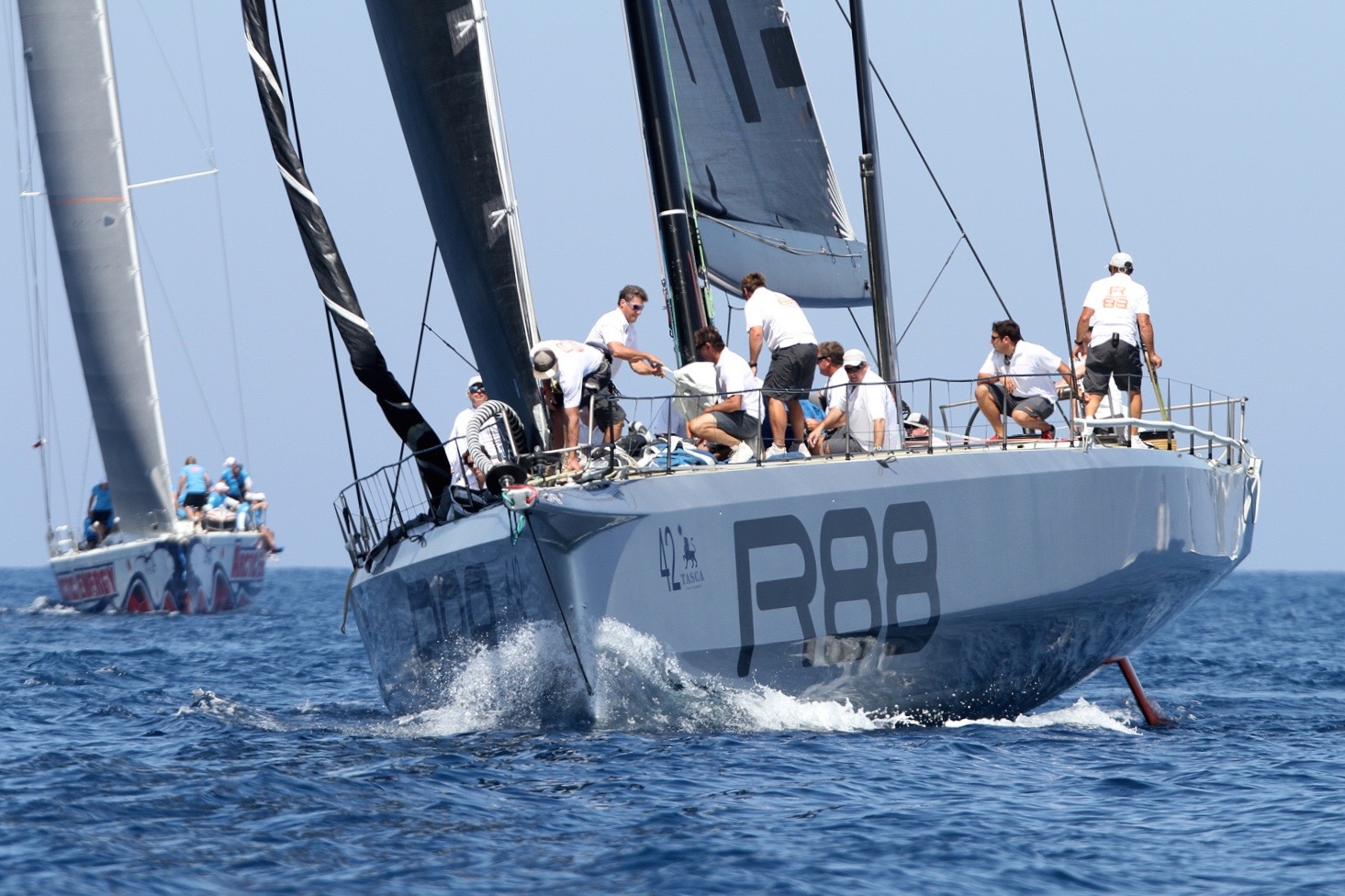 Palermo, 21 August 2016 – The Palermo-Montecarlo Regatta has started this morning at 12 o’clock in the clear water of Mondello, headquarters of the Circolo della Vela Sicilia. This year, there are 59 registered boats (57 left) from 11 different countries: Italy, USA, France, Monaco, Germany, Spain, UK, Malta,Turkey, Russia and Hungary.
As expected, since the beginning the American Rambler is immediately ahead. The owner George David, from New York, has relied everything on Brad Butterworth and on a crew composed of 20 champions of America’s Cup and Round the World Races (among them there are also the Italian sailors Lorenzo Mazza and Silvio Arrivabene). The task is to break the record (47 hours 46 minutes 48 seconds) set by Esimit Europa 2 in 2015.
Rambler 88, all-carbon, is one of the fastest boats in the world. It is an hi-tech project, with canting keel, long dagger boards, a deep chine and a mast 41 metres tall. Butterworth & co. should take in consideration the presence of gentle wind up to Porto Cervo.

SIX MAXI YACHTS AND THE INTERNATIONAL MAXI ASSOCIATION
There are 5 Maxi yachts (from 18 to 24 metres) that will give Rambler hard time: OZ/Nl, Weddel/Rus, Arctic Energy/Rus, Junoplano/It, Stupefy/It and Buena Vista/It. This best result is the consequence of the inclusion of the Palermo-Montecarlo Regatta in the IMA (International Maxi Association). It is part of the off shore track for the Maxi yachts, which includes also the Rolex Middle Sea Race, the Volcano Race and the Giraglia Rolex Cup.

CHALLENGE WITHIN A CHALLENGE
Buena Vista (ICE 62) is the boat of Circolo della Vela Sicilia. It has been chosen to defend the title won in 2015. Buena Vista, taking part in the competition to represent the Sicilian region, is a mixed crew composed of sailors from Bari and of a young competitive sailors team which is part of the Circolo della Vela Palermo. In this young team, we can find Edoardo Bonanno, Gabriele Coffaro, Antonio Saporito, Mainaldo Maneschi and Domi Aiello, Gigi and Beppe Pannerale and the skipper Alberto La Tegola, an ex-Olympian sailor and at the moment the President of the Regional Committee VIII Zona (Puglia) of the Italian Sailing Federation. Majic 2 is the boat of the Yacht Club de Monaco. In the crew, you can find Jacopo Carrain and some athletes of the young team of the club but also some experts as the skipper Pietro D'Alì, the trimmer Enrico Zennaro and the bowman Giuseppe Leonardi.

KEEP AN EYE ON IT
The Palermo-Montecarlo (500 miles) raffles two cups: Angelo Randazzo’s Cup for the winner of the most numerous category of the corrected time and the Giuseppe Tasca d’Almerita’s Cup for the overall winner. Maverick (Infiniti 46, GBR), Black Betty (VO70, TUR) and Alizée (a French prototype of 15 metres) are some of the international team which compete for these cups. Among the most competitive Italian team: Grand Soleil 40 Alvarosky of Francesco Siculiana (UVAI President), Extra 1 with Massimo Barranco and the Olympian Matteo Ivaldi (winner of PA-MC 2015) and other Italian champions 2016: Be Wild (Swan 42 of Renzo Grottesi, winner of PA-MC 2014) and Sagola of Peppe Fornich (Grand Soleil 37).
There also other boats that deserve a special mention because of the profound messages that they are launching: Blitz, the boat of the Navy League of Palermo with differently-abled sailors, strong believers of the race and Gwaihr - Diversamente Marinai. Finally, Damacle which attracts interest for the roads accidents victims.

LUNATIKA IS THE BOAT TO BE DEFEATED IN THE PALERMO-MONTECARLO “x 2”
The Palermo-Montecarlo Regatta represents also a key moment for the doublehanded race (10 boats registered in this class). Lunatika (Sun Fat 3600) with Stefano Chiarotti and Giancarlo Pedote (one of the most important Italian oceanic sailors) is the boat to be defeated. Bora First with Piercarlo Antonelli, represents their direct opponent in order to win the Italian off shore Championship.