FROM PALERMO TO MONTECARLO: 500 MILES AMONG BEAUTY AND ADVENTURE 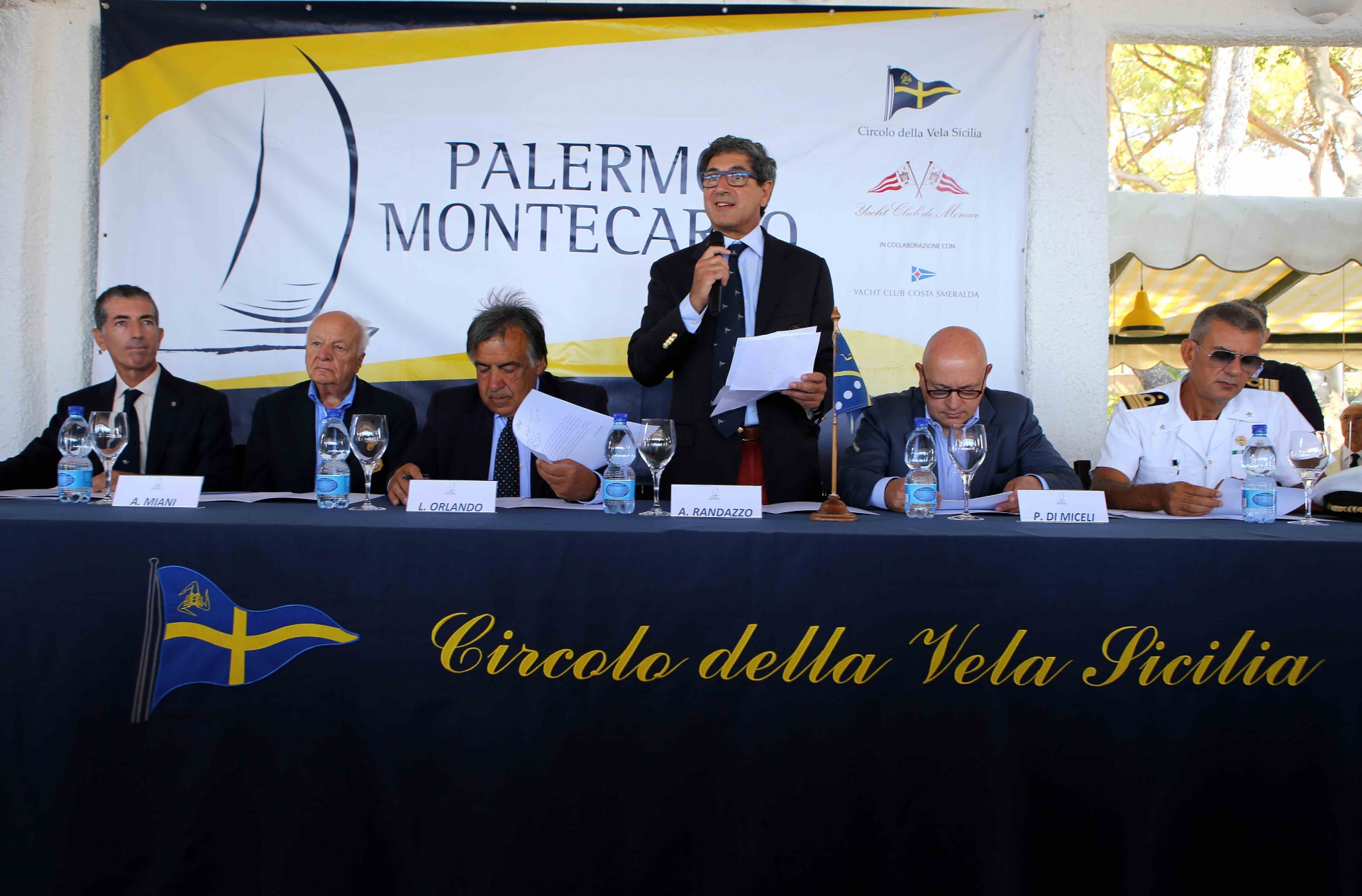 59 boats from 11 countries at the starting line

Palermo, 19th August 2016 – Palermo and Montecarlo are two cities symbols of the Mediterranean Sea. Both of them are two top destinations in the international tourism, mostly because of their history and their beauty. It was twelve years ago that it came up the idea to unify them in a sailing race with an enviable and unique course: Palermo-Montecarlo regatta. Indeed, everything started from a simple conversation between the Assessor of Palermo and the Consul of Monaco. The race course is composed of 500 miles that you can run in one breath, looking at breathtaking views, with a bit of healthy competiveness. The Circolo della Vela Sicilia and the Yacht Club de Monaco are the organizers of the race, in collaboration with the Yacht Club Costa Smeralda.

The departure is set on Sunday 21th August at 12 o’clock, in the clear water of Mondello, headquarters of the Circolo della Vela Sicilia, with the Regatta Director Alfredo Ricci. From this location the boats will go towards Sardinia, passing through a gate in Porto Cervo, another city-symbol of the Mediterranean Sea. There, the experts will choose if it will be better sailing the Bocche of Bonifacio or leaving the Corsica island on their left. The Palermo-Montecarlo represents the only occasion to be enchanted by some dramatic panorama and by the charm of Palermo but also it gives the opportunity to see some of the most fascinating places of the Mediterranean Sea (Porto Cervo and the coast of Corsica). Montecarlo is the final destination of the race and one of the most elegant city in the Mediterranean Sea, its charm reflects the beauty of the Yacht Club of Monaco that is the co-organizer of the race and the location for the prize-giving ceremony (26TH of August).

RAMBLER AND THE RECORD
There are a lot of difficulties that the sailors have to face up and many decisions to be taken in order to chase another aim of the race: the speed record. Rambler is an American boat (88 feet, 27 metres), its technical characteristics, such as the canting keel, long daggerboards and a deep chine, will be essential in trying to break up the record established last year by Maxi Esimit Europa 2: 47h 46’ 48’’. Rambler 88, all-carbon, was commissioned in December 2014 by the American ship-owner George David and it’s arriving in Sicily with an expert sailor dream team of America’s Cup and Round the World Races. Rambler was designed by one of the most well-known architects in the world, the French-Argentinian Juan Kouyoumdjian (Juan K). The New Zealander Brad Butterworth is the helmsman of Rambler, a sailor who will remain in the history of the international sailboat. On board there also two Italian international renowned sailors: Lorenzo Mazza (trimmer) e Silvio Arrivabene (navigator).

THE BOATS OF CIRCOLO DELLA VELA SICILIA AND YACHT CLUB DE MONACO
The reasons of the athletic interests have not finished yet: according to the tradition, both of Circolo della Vela Sicilia and the Yacht Club de Monaco have organized their own boat in order to create a fascinating challenge. Buena Vista ICE 62 (19 metres long) is a project 100% Made in Italy by Umberto Felci for two skippers from Bari, Gigi and Beppe Pannarale. The skipper of Buena Vista is Alberto La Tegola, an ex-Olympian sailor and at the moment the President of the Regional Committee VIII Zona (Puglia) of the Italian Sailing Federation. Buena Vista, which taking part in the competition to represent the Sicilian region, is a mixed crew composed of sailors from Bari and of a young competitive sailors team which is part of the Circolo della Vela Palermo. In this young team, we can find Edoardo Bonanno, Gabriele Coffaro, Antonio Saporito, Mainaldo Maneschi and Domi Aiello. They have the duty of defending the title of their victory in the Palermo-Montecarlo 2015.
J111 "Yacht Club de Monaco - Majic 2" (ex-Black Bull), is a shorter boat, strong and competitive especially in rating-adjusted time IRC. During the previous editions of the race, this boat showed a series of excellent performances, in particular in fresh breeze conditions. Jacopo Carrain famous for one-design racing is the skipper of J111. On board, there are also the expert skipper Pietro D'Alì, the trimmer Enrico Zennaro and the bowman Giuseppe Leonardi.

A BIG NAVAL COMBAT
The event raffles two cups: Angelo Randazzo’s Cup for the winner of the most numerous category of the corrected time and the Giuseppe Tasca d’Almerita’s Cup for the overall winner.
The entry list of this edition includes boats from 11 countries (Italy, USA, France, Munich, Germany, Spain, Great Britain, Malta, Turkey, Russia, Hungary). Among these, there are 6 Maxi and many boats that look promising: Maverick (Infiniti 46, GBR), Black Betty (VO70, TUR) and Alizée, a French prototype of 15 metres. There also other boats that deserve a special mention, for example Junoplano (60 Open), Grand Soleil 40 Alvarosky of Francesco Siculiana (UVAI President), Extra 1 with Massimo Barranco and the Olympian Matteo Ivaldi (winner of PA-MC 2015) and other Italian champions 2016: Be Wild (Swan 42 of Renzo Grottesi, winner of PA-MC 2014) and Sagola of Peppe Fornich (Grand Soleil 37).
It is worth to consider two boats that launch some profound and social messages: Blitz, the boat of the Navy League of Palermo with differently-abled sailors, strong believers of the race and Gwaihr - Diversamente Marinai. Finally, Damacle which attracts interest for the roads accidents victims.

PALERMO-MONTECARLO X 2
It should be also highlighted the doublehanded race (Palermo-Montecarlo x 2), its values and the increasing interest: in this category you can find 10 boats for example Lunatika (Sun Fast 3600) of two sailors Stefano Chiarotti and Giancarlo Pedote (one of the most important Italian oceanic sailors) and Extreme Life of Marurizio Vettorato and Clelia Sanna.

AIMS AND PERSPECTIVE
Because of its dynamicity and its international orientation the Palermo-Montecarlo regatta is now a race with one of the most interesting growth trend in the yachting panorama and the year 2016 indicates the record concerning the number of the registered boats (59). The next aim is to increase more and more in order to be recognized as one of the top worldwide offshore races. The Palermo-Montecarlo regatta is becoming closer and closer to this objective: indeed, it has already been part of the Italian off shore Championship of the FIV but also it gives its contribution in the title with the highest coefficient. Furthermore, it has been included since last year in the IMA calendar (International Maxi Association) and for this reason, it takes part in the offshore racetrack for the Maxi yacht (which includes also the Rolex Middle Sea Race, the Volcano Race 2016 and the Giraglia Rolex Cup).

THE INSTITUTIONS
The Palermo-Montecarlo has the support of some of the most important institutions of Sicily, the municipality and the Major of Palermo, Leoluca Orlando. The support of Anthony Barbagallo from Sicily is also essential. He is the Councillor for tourism, sport and spectacle and he has included the regatta in the Mibact project.

CIRCOLO DELLA VELA SICILIA
The Circolo is one of the most ancient club in the Mediterranean Sea and it was founded in 1933. During his long history, it hosted some prestigious National and International races for instance, Italian and European Championship of Star and J24 class and Italian Championship of Dinghy 12p and Optimist class. In 2013, the Yacht Club launched the challenge to the XXXIV America’s Cup with Luna Rossa Challenge Team. Since 2009 it has been chaired by Agostino Randazzo.