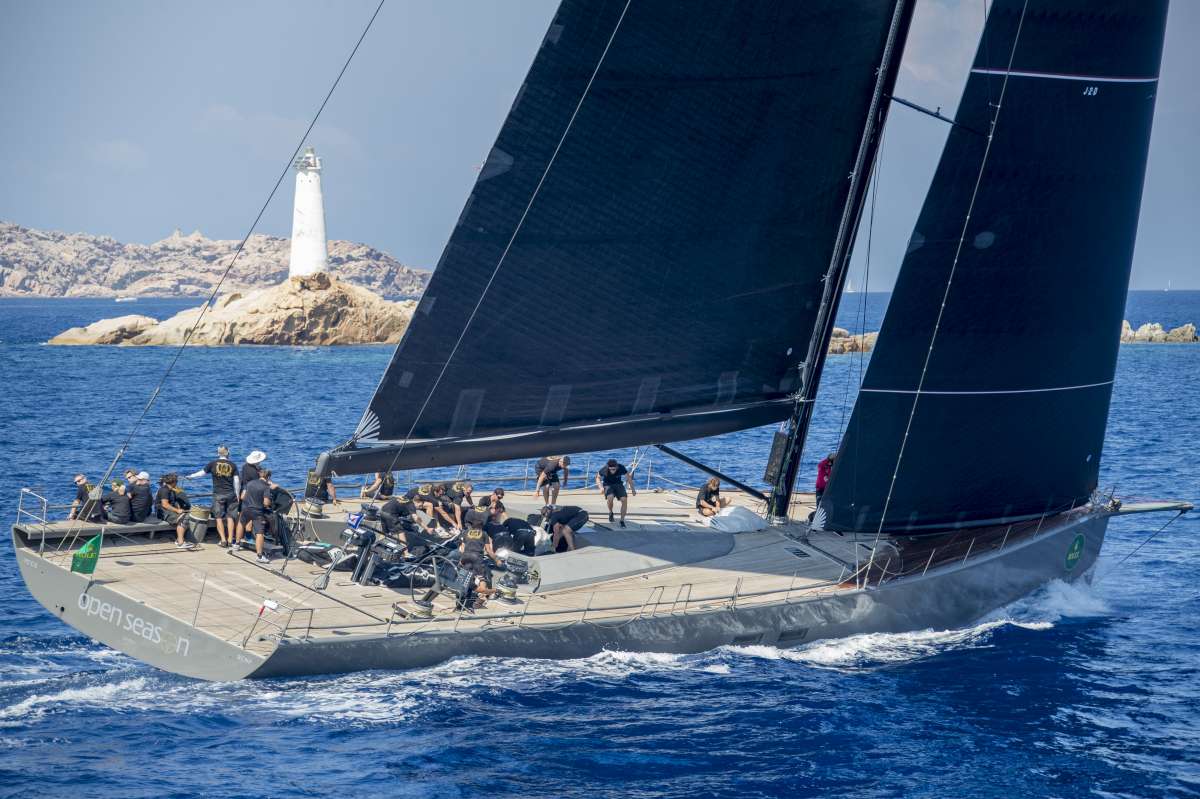 Porto Cervo, Italy. 9th September 2016. An intense penultimate day at the Maxi Yacht Rolex Cup and Rolex 72 World Championship left most of the competing divisions with everything to play for in tomorrow’s grand finale. All divisions sailed coastal courses today, with the Maxi 72 and Wally classes completing two races around the islands off Porto Cervo. The breeze of around 10 knots on the starting line hit 15 at some points along the course but began to die out later in the afternoon with some of the courses being shortened to ensure a fair race for all competitors. Racing in the event organised by the Yacht Club Costa Smeralda in collaboration with the International Maxi Association is scheduled to conclude tomorrow, Saturday 10th September.

Despite breaking her winning streak today, Thomas Bscher’s Open Season remains firmly at the helm of the division with a seven point lead over Tango G – winner of today’s second race. Y3K claimed her first bullet of the week in the final race of the day but remains in fifth place overall. The Wally 77 Lyra posted a 7-3 scoreline today and remains in third place overall, on equal points with J One, owned by Jean Charles Decaux, in third place. Although Open Season will be hard to beat, the scheduled windward leeward races could reshuffle the cards in this 13-boat division, the largest in the event.

Jochen Schuemann, tactician on Open Season: “So far so good. We have had very good, clear starts and at the moment we have a good lead. Our direct opponent Magic Carpet has been unlucky this week, otherwise they probably would be closer. We are looking forward to some up and down courses tomorrow which usually are quite good for us. Today the wind helped the small boats to beat the bigger boats and that’s how it is in sailing sometimes. We sailed a very good race even though we finished eighth – but we are not worried about that result.”

Bella Mente also had mixed fortunes today with a fifth and a first place in the two short coastal races. The American boat with strategist Adrian Stead now sits four points ahead of Momo, Markus Weiser on tactics. Roberto Tomasini’s Robertissima is less than one point behind in third place. With two windward leewards scheduled for the final day, every tack and gybe will count in the battle for the title of Rolex Maxi 72 World Champion 2016.

The 33-metre Baltic WinWin, launched in 2014 and participating in the Maxi event for the first time, has lead the SuperMaxi group from the off, but with just a four point lead over last year’s winner Inoui, the newcomer cannot afford to rest on her laurels tomorrow. The J-Class Velsheda, in third place on equal points with Inoui, will also be battling for a top spot along with Nikata, just one point behind in fourth.

The match between the two racing machines in this division, George David's Rambler 88 and Mike Slade's Leopard 3, will come down to the line tomorrow. After taking her second consecutive bullet today, Leopard now sits one point ahead of Rambler, meaning that the victor in tomorrow’s race will also claim the division win.

Second today by just five seconds in corrected time, Pier Luigi Loro Piana's My Song continues to lead overall. A five point delta in this 7-boat division will leave tactician Tommaso Chieffi feeling fairly confident but not totally safe. The battle for runner-up places will be an interesting one between today’s winner Alpina, third-placed Altair-Aegir, Grande Orazio in fourth and Windfall in fifth – all separated by just three points.

The Farr 70 Atalanta II claimed her second win today to move up to pole position in the division. The final result will all come down to the line tomorrow as Bryon Ehrhart’s Lucky sits just one point behind, followed closely by Prospector in third place.

Wallyño’s second win of the series consolidated her position at the top of the Mini Maxi Racing Cruising fleet. Meanwhile a second place finish for Arobas today sees her hold on to third place, now on equal points with H2O in second.

Windfall finally relinquished the lead she has held throughout the week as Massimiliano Florio’s SWS 82 Grande Orazio moved up to the top spot overall. With just one point between the two, tomorrow’s race will be decisive.

Prior to what promises to be an adrenaline-filled final day, owners are relaxing this evening at the Rolex Gala Dinner at the Cala di Volpe Hotel, while proceedings will conclude with the prize giving ceremony in Piazza Azzurra tomorrow afternoon.

The Maxi fleet is scheduled to be on the regatta course tomorrow, Saturday 10th September, for a first warning signal at 11.30 a.m. Light winds of approximately 10 knots are forecast.

Daily releases, photos and video content are available on www.yccs.com and via the Rolex Pressroom.