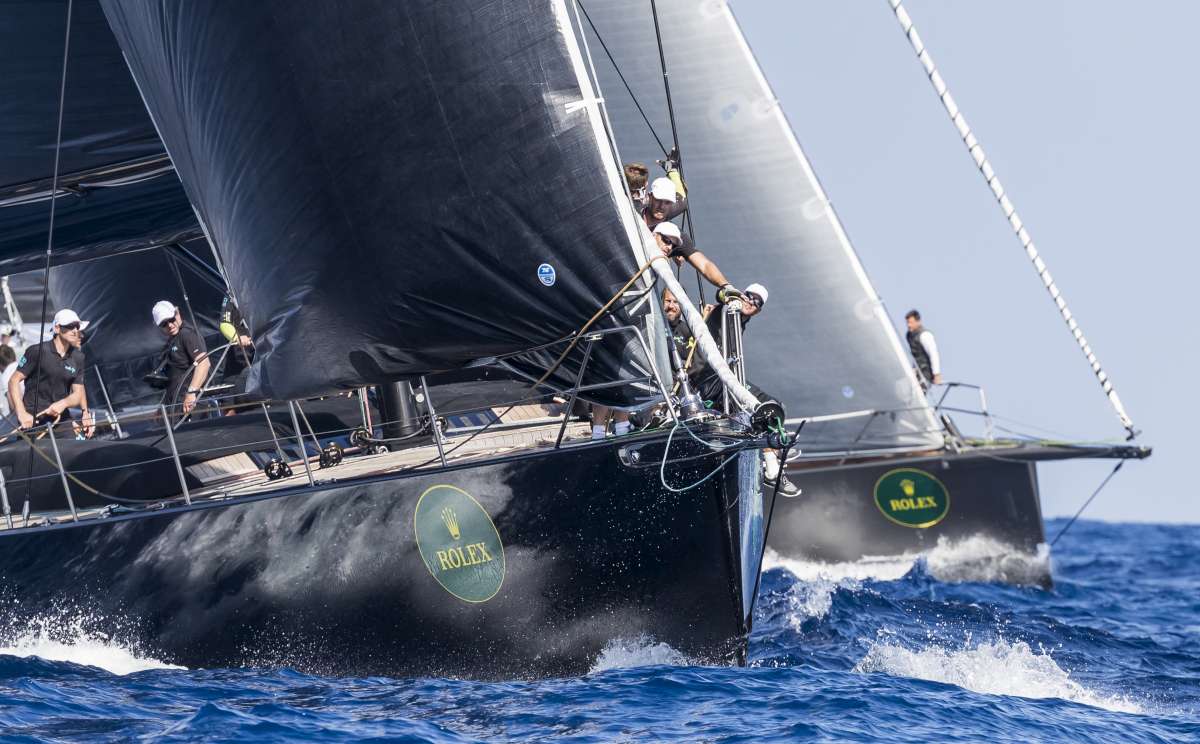 Porto Cervo, Italy. 8th September 2016. The 52 sailing yachts participating in the Maxi Yacht Rolex Cup were keen to get back on the water today after yesterday’s second enforced rest day caused by severe wind and sea conditions. A start scheduled for 10.30 had boats out in the starting area bright and early and a 10 knot north-easterly breeze accompanied the various competing divisions across the line.

Coastal courses were set for all divisions which  brought the Maxis south to round Mortorio and Soffi islands and – while the Maxi 72s and Wallys finished off Porto Cervo – the remainder of the fleet sailed on into the Gulf of Arzachena and were set to continue to round the Monaci islands before heading back to port. However a dying breeze forced the YCCS Race Committee to shorten the course for the remaining divisions in the early afternoon.

Wally
The 32.5-metre Open Season, Jochen Schuemann on tactics, added a third consecutive victory to a thus-far perfect scorecard. The lighter conditions obviously suited some as Y3K posted her best score of the week with a second place in today’s coastal race, while the Wally 94 Galma took third place, also her top score so far. Today’s result allowed Open Season to lengthen her overall delta to 8 points ahead of the Wally 80 Tango G while the Wally 77 Lyra remains in third place.

Maxi  72
The race for the World Championship title remains incredibly tight at the top of the Maxi 72 fleet with Hap Fauth’s Bella Mente scoring a second place in today’s coastal race to retain her overall lead less than one while point ahead of Robertissima. The Italian team, with Vasco Vascotto on tactics took victory in today’s 16-mail race, thereby overtaking Germany’s Momo which moves down to third place overall.

SuperMaxi
WinWin hangs tight in the top spot thanks to another solid second place finish today and widens the gap just slightly between herself and Nikata in second. Just two points further back is Inoui, climbing back up the leaderboard with a win today after a disappointing seventh place on Tuesday. The newly-launched Highland Fling 15, with Mike Toppa calling tactics, claimed third place in today’s competition.

Maxi Racing
Fortunes were reversed today in the Maxi Racing division as the match race between George David's Rambler 88 and Mike Slade's Leopard 3 saw the latter storm around the course to cross the finish line 6 minutes ahead of her rival. With today’s win Leopard, with Ian Budgen on tactics, edges into first place, on equal points with the new Rambler.

Maxi Racing Cruising
No change at the top of the Maxi Racing Cruising Division as Pier Luigi Loro Piana's My Song notched up a second consecutive bullet to consolidate her top spot overall ahead of the Southern Wind 94 Windfall. Hot on Windfall’s heels are both Altair-Aegir and Grande Orazio – all three of whom sit on 7 points.

Mini Maxi Racing
With a 2-2 scoreline the American boat Lucky lived up to her fortunate moniker today as she moved up to first place overall. Now just one point behind her thanks to a win today is Atalanta II with Gabriele Benussi on tactics, while the American team on Prospector moved down to third place.

Mini Maxi Racing Cruising
A bullet for the Wally 60 Wallyño took her to first place overall today ahead of the Vallicelli 80 H2O. The French Swan  601 Arobas claimed second place today to take her up to third place overall.

Southern Wind
Windfall holds on to her lead of the Southern Wind classification followed by Grande Orazio on the same points score.

Crews gathered at the YCCS this evening to kick back and relax at the Audi Crew Party.

Participants will be back on the regatta course tomorrow, Friday 9th September, with the first starting signal scheduled for 11.30 a.m. The forecast is for variable breeze of 10-12 knots.

During the regatta daily releases, photos and video content will be available on www.yccs.com and via the Rolex Pressroom.