USA on top after day one of Invitational Team Racing Challenge 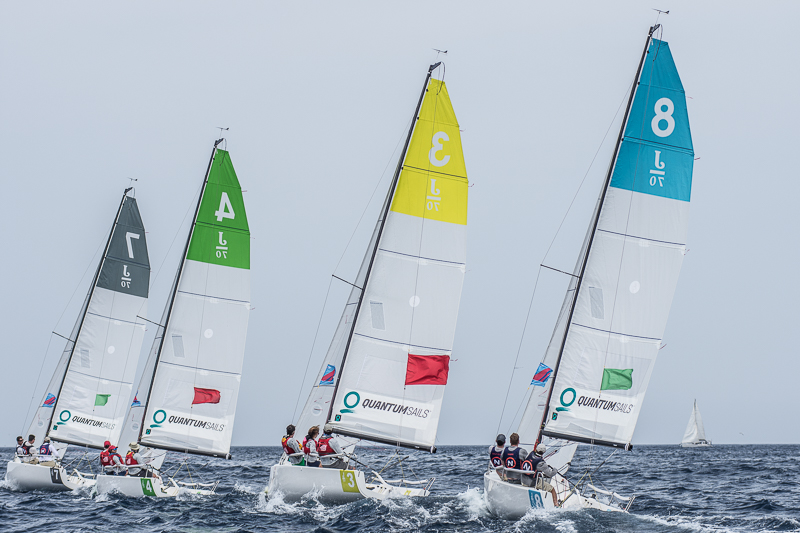 Porto Cervo, Italy. 16th June 2016. Day One of the Invitational Team Racing Challenge, organised by the Yacht Club Costa Smeralda in Porto Cervo, saw an all-American top three converge at the head of the provisional classification. At the conclusion of the first round robin, which saw 15 matches disputed on the race course just off Porto Cervo Marina, the team representing New York Yacht Club remained unbeaten. Their European opponents, relegated - for now - to the bottom half of the scoreboard, will be looking to make up lost ground in tomorrow's second round robin.

The J/70 fleet provided by the Yacht Club Costa Smeralda for the event proved to be agile even in today's light airs and the Race Committee had no problem fitting in the full programme of flights scheduled for the day. The New York Yacht Club enjoys a perfect scorecard so far, boasting 5 wins out of 5 matches, and heads the provisional classification ahead of their neighbours from the Newport Harbour Yacht Club in second place with three wins and two defeats. Eastern Yacht Club, the final competing American team, sit in third place while hosts the Yacht Club Costa Smeralda take fourth ahead of the UK's Royal Thames YC and Sweden's Gamla Stans YC.

While racing today was fast and fun, teams are looking forward to a stronger breeze tomorrow as the infamous Sardinian Mistral moves in. Forecasts have it blowing at 15-20 knots on the course tomorrow. Fortunately staff from both Quantum Sails, technical partner of the event, and JBoats are on hand on the race course for any technical tweaking that may be required.

In the meantime all concerned will be relaxing and taking in the stunning views form the YCCS Pool terrace at this evening's Team Barbecue.