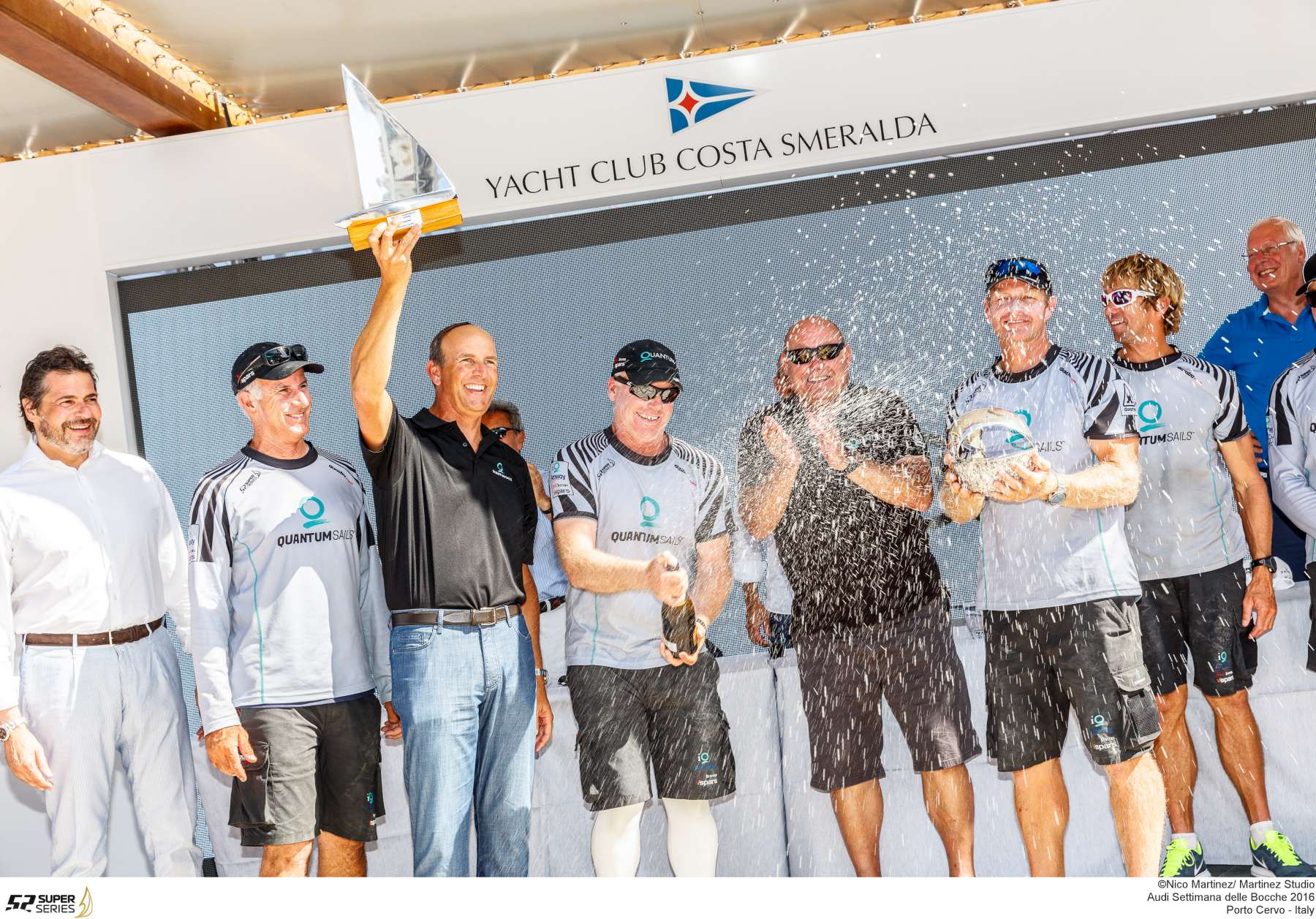 When Zennstrom's team faltered on the penultimate windward-leeward of the nine race series, dropping a ninth into an otherwise impressive second half of the event, Quantum Racing's stock stayed up, retaining their same solid, reliable consistency.

The team lead by owner-driver Doug DeVos took away two third places from the last pair of races to win by six points overall. In so doing they also extend their lead for the season-long 2016 52 SUPER SERIES championship to 29pts over Ran Racing.

The Mistral piped up to 25kts for a fizzing Porto Cervo finale, the TP52's stretching their legs in over 20kts downwind. The strongest breeze of the season so far penetrated any weaknesses in crew work or mechanicals.

Azzurra escaped with third place overall from their home waters regatta despite having to retire from the last race when a pin in their hydraulic forestay system failed. And after a second place in the first race of the day Provezza's momentum was halted by a main halyard failure, though they repaired and sailed for their 10pts.

Wins were shared on the final day between Tony Langley's Gladiator and Zennstrom's Ran Racing, both winning by a decent margin on the best day of racing so far this season. Gladiator stepped clear of the scrapping at the first mark to sail away down the first run, while Ran Racing similarly were always ahead of the tussle between Andy Soriano's Alegre and Quantum Racing.

As has often been the case with previous Quantum Racing regatta wins, and this is their second of the 52 SUPER SERIES season, their powers of recovery are probably more valuable than their race win. When they were over the start line in Race 7 and re-started last, at least 30 seconds behind the last boat, then rounded the top mark in tenth, they pulled back to fourth by the finish line. But it is their tight, percentage sailing and speed in light winds which is winning them regattas. It was noticeable in the stronger breezes of the last day that Vrolijk designs were first and second in the first race and won the last race.

Owner-driver Doug DeVos enthuses and inspires his team to perform to the highest level. Not having steered the Quantum Racing TP52 since January - July if you are considering the 52 SUPER SERIES events - there was a shaky first race ninth place, but from there the team hit their stride as usual - Ed Baird as strategist complementing tactician Terry Hutchinson.

And once more the points in the middle third of the table are incredibly tight. Azzurra and Harm Muller Spreer's Platoon finish on the same points, 54, Provezza one point behind on 55, and Alegre and Marco Serafini's Xio both on 59 and Gladiator on 60. Ran Racing step up from seventh in Scarlino to finish second and now lie second overall on the circuit standings.

Terry Hutchinson  reported:
"It was a solid way to finish. But we feel we are just broad brush stroking things when it comes to getting better. We are making our interaction on the boat better and making the interaction through the whole team better. We talked about the performance Ran had been making over recent races, a bit of a hot streak, and so we stuck to our daily goal of eight points or less and so they would need a five point day to beat us. We had a great start and got rid of Ran early on. We got a solid third and Ran a ninth and that gave us some breathing room."

" When the conditions came up the biggest mistake would have been to throttle back and so we stuck with the target and sailed a solid last race. We had a great start. We worked to protect the asset and not do anything stupid."

"Leads can evaporate so quickly. I think the best thing in this regatta was we had a helmsman swap, and it is great measure of the team and the platform he has provided for us, that he can step in and we continue to race at a high level. That is an indication of him as a sailor and the team from shore team to sail designers, to bow to back on the boat. Winning in Scarlino was great because we wanted to start the season on the right note and now the expectations we all have and we want to do right by Doug. It is awesome."#

They said:
Doug DeVos (USA) owner-driver Quantum Racing (USA):   "I think about the team and what a great job they do from the last regatta to this, every little thing is fixed, every little thing that can be done to make us faster is done, and then the boat is put together and the boat is tested, and tested again. And so when the wind comes up in years past you would probably have been terrified in these conditions, but like this today you can just have fun and sail competitively. It is amazing to be part of this class, it has happening all across the race course with all the different teams. You can see all the teams doing so well.
This is a special place. To be able to come here and win is spectacular. But we come here and don't shoot for the stars, we work methodically and build from foundations."

Niklas Zennstrom (SWE) Ran Racing (SWE): "We messed up the first race but it always nice to finish the regatta with a win. It has been such a great regatta. We got some very different conditions but to finish with 22kts of breeze today was fantastic. The boats were flying downwind which is how it should be. We made some tweaks to the boat, the balance of the rig and the rudder, it is going really well. We struggled for speed in Scarlino but I think we are quick now. And there was some rust in Scarlino but that has gone."

Ian Walker (GBR) tactician Gladiator (GBR): " It was a much better regatta for us. We were in the thick of it. We nearly beat Alegre and in the last regatta I don't think we ever crossed ahead of them and so that puts it into context. That is the first race Tony has won with the new boat. And so when we crossed the line he said 'I have not been so happy to win a race for a long time'. SO that was nice. We are definitely better when it is windier. We are struggling when it is lighter, and we are struggling to find out why that is. We are not quick enough and not sailing well enough sometimes as a result."