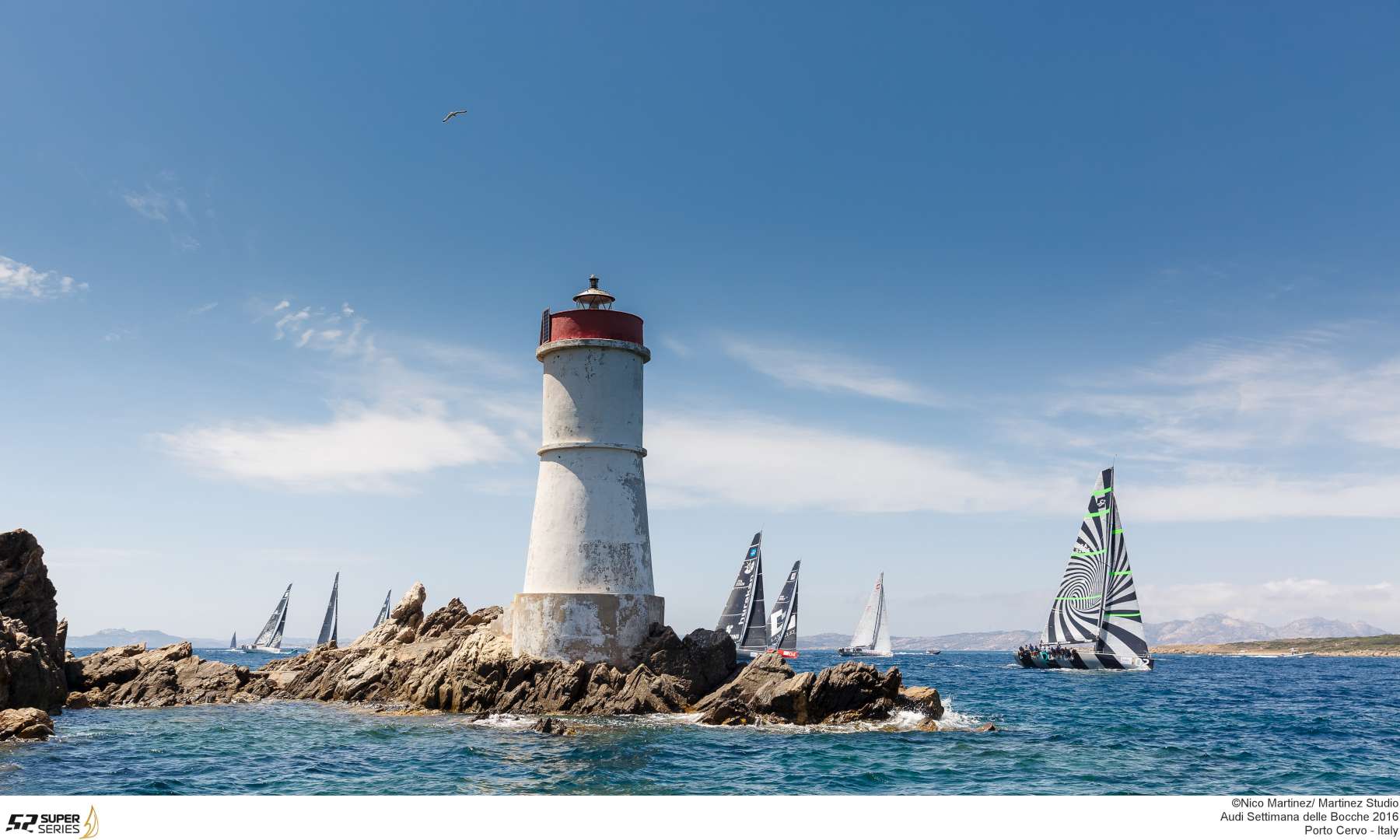 30th June 2016. Porto Cervo, Italy. The overall regatta lead at the Audi Settimana delle Bocche regatta on the Costa Smeralda has changed with each and every race so far. But by winning the second race today, a windward-leeward, Quantum Racing take a clear two point lead at the top of the standings at this second regatta of the 2016 52 SUPER SERIES season.

So far Bronenosec, Provezza, Azzurra and Quantum Racing have all led the table and the points remain extremely tight in this event organised by the Yacht Club Costa Smeralda. Quantum Racing, with Doug DeVos on the helm, achieved their own points goal for the day. Their target was to add eight points or less from the 12-miles coastal race and one windward-leeward contest. With a sixth and first that was achieved but tactician Terry Hutchinson came ashore chastising himself for some of his decisions that he felt contributed to their sixth place.

“I expect more of myself in the decision making elements. You hate to be the one costing the team points. But at least we know where the problem is!”

He was especially angry to have gybed too early at the offset mark of the first upwind on the coastal race, placing the boat in bad air when they should have been accelerating away in clear. And they lost XIO on the final approach to the finish line. He paid a glowing tribute to the Quantum Racing team for keeping to their task, keeping the boat fast and some great crew work which gained back places.

”But, all in all it’s a good day.” Hutchinson concluded, “We are fighting to stay in it until Saturday. Today it was not done in the prettiest of fashions.”

Top boat of the day was Niklas Zennström’s Rán Racing. They bounced back from a poor Wednesday to post a pair of good, solid second places. They chased coastal race winning Provezza hard around the course which took the fleet downwind to a turn at Tre Monte – some four miles into the Maddalena straits – back out upwind for a short upwind-downwind to finish.

And in the windward-leeward race they lost Quantum Racing in the first beat, but Rán’s second second of the day was never in doubt and they now lie second overall.

Azzurra drop to third overall after their 4,6 for the day. But there is only three points between first and third and Bronenosec are prowling, making 3,4 from the two races.

“We met our goal over the day, eight points or less, but not in the prettiest of ways. But all in all it’s a good day. We are fighting to stay in it until Saturday. It was not done in the prettiest of fashions and I expect more of myself in the decision making elements. You hate to be the one costing the team points but at least we know where the problem is!  It is such a close a regatta. That is why we are fighting to stay in until Saturday. I give the guys high marks for the boatspeed we have and the boat handling component is really strong. And I know you cant get it right all of the time. But if we don’t learn from my mistakes then you would be complacent.”

“This fleet can make you look pretty stupid very quickly. It is so easy to have a bad day like we had yesterday. It is always the small differences. People ask what we do differently and we talk about it a lot and the answer is nothing. We sail with the same plan, sail the same way. The coastal race was a nice one, not too long, and so two second places in this fleet is a good day. Everybody focuses so much of their training, their practice and their line ups on starting and rightly so. Today Niklas did an awesome job off the start line in winning us the spot we wanted. The start, honestly, was the key on the coastal race. It was an interesting coastal race. Too often they are a soldier’s course, one following the other wthout passing opportunities. But this one panned out for us. It is down to metres here and there.”