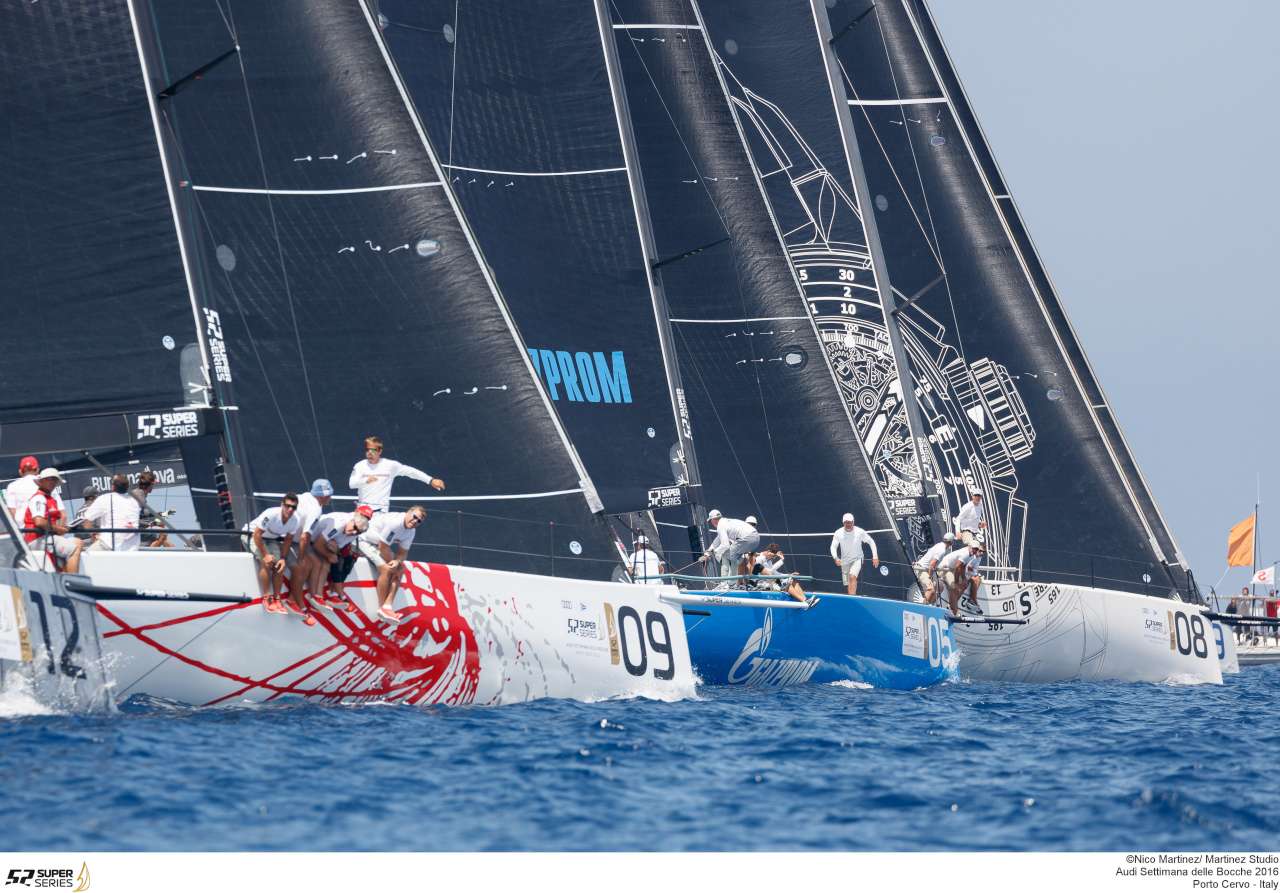 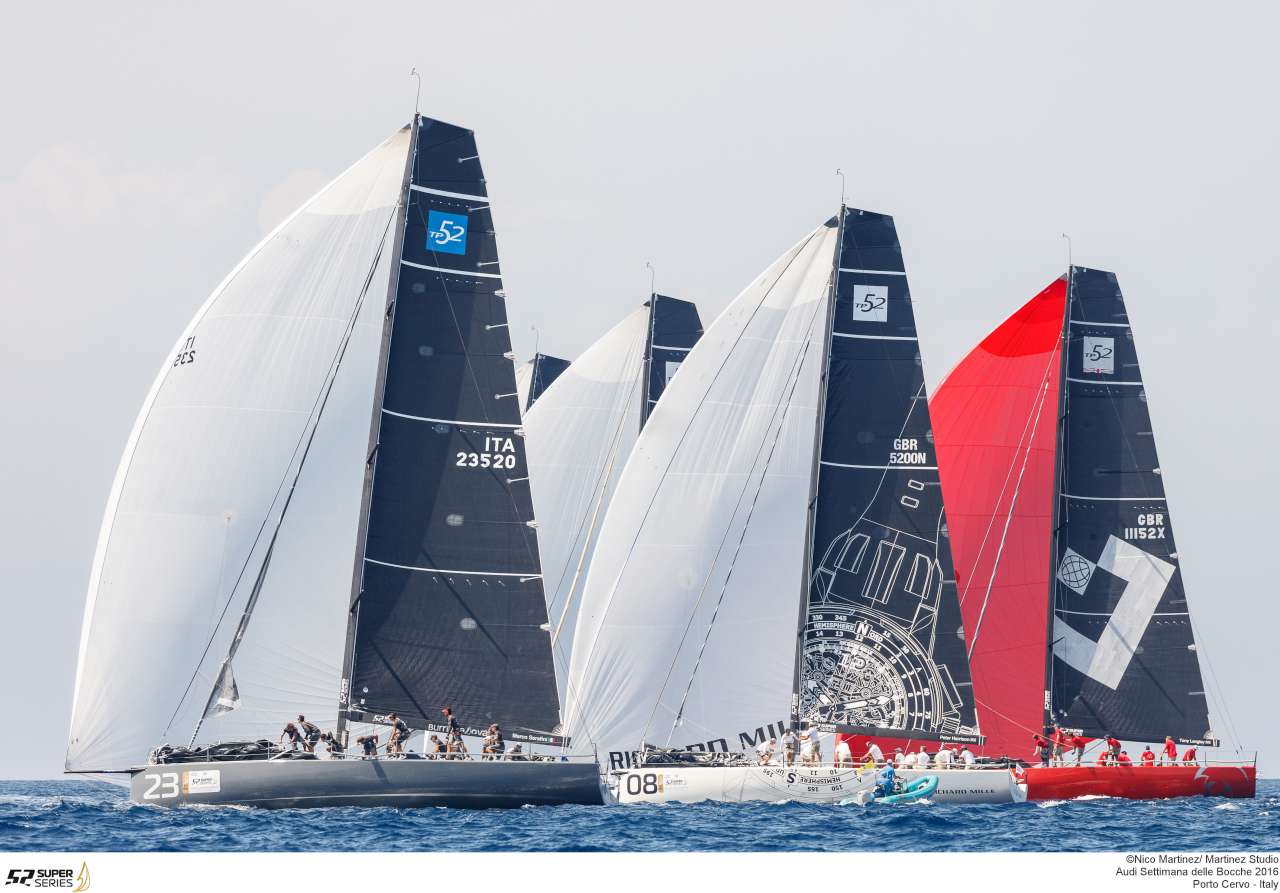 Die Another Day....Quantum Racing Comeback Keeps them On Course

1st July. Porto Cervo, Italy. While Niklas Zennstrom's crew of Ran Racing continued a rich vein of form, winning the second race of the day at the Audi Settimana delle Bocche organised by the Yacht Club Costa Smeralda, the regatta leaders Quantum Racing staged a big comeback to stay on track for their second regatta win of the season.

After poking their bow over the start line too early in today’s second race, Quantum Racing restarted smartly and fought back from their tenth at the top mark to fourth and so maintain a two points lead going into Saturday's finale.

From the last four starts Ran Racing have sailed to a 2,2,4,1 and were it not for Quantum's typical, never-lie-down-and-die recovery, would surely have been leading into last day of the event. Their performance on the Costa Smeralda is a significant improvement on the first regatta of the season, Scarlino, where they finished seventh, 23 points behind the winners, Quantum Racing.

It was a difficult day of racing. The light SE'ly breeze was uneven up the course, often pulsing in with new pressure from the left but the right showing promise and dividend at times. Quantum Racing's Terry Hutchinson and Ed Baird conspired together to read the first beat beautifully in the first race. They reaped a good reward on the high left, the final third of the beat, coming in on port with Alegre to steal away round the first mark with a good lead. Doug DeVos' team won the first race while Alegre in second were well rewarded for their late night endeavours, pulling their rig out and replacing some of their standing rigging after their D2 shroud snapped early in Race 5.

With their win, Ran fourth and Azzurra seventh, Quantum Racing had built a five points lead which it looked like they would carry into the last day. But in the final seconds before the start gun Quantum Racing's bow came up only a second or two early and as the gun went they were OCS. Ran Racing started well and lead Platoon and Sorcha at the top mark while Quantum Racing were 10th. But the second beat offered opportunities on the left again. Cameron Dunn took Sorcha left and they passed Platoon to take second, their best finish yet at their first ever 52 SUPER SERIES regatta. And the left worked well for Doug DeVos crew who got themselves right back into contention.

"We made it hard for ourselves. We certainly did." smiled DeVos back at the dock, and, of the secret of their comeback he says:
"We just keep at it. Don't give up. Don't get frustrated. Each and every person on board is working. Every wave downwind we are working. We just never give up."

Meanwhile Sorcha owner-driver Peter Harrison was delighted with his second and is loving his first regatta on the Circuit:

"We really came with no expectations at all. In our heads we thought we could maybe beat a boat or two, to be penultimate rather than last, so we have exceeded that and I am really enjoying it."

Morgan Larson (USA) tactician Ran Racing (SWE): "I don't think we have any secrets. The conditions are tricky out there and I think we have had a little bit of luck. We have had solid starts and good speeds by the guys. At the beginning of the event we got the inconsistencies out of the way. And so we just try to go through the lessons we learned from them. We keep learning. And Quantum have really showed that consistency really pays, as they are fond of saying 'just keep chipping away'. It is working for them and we are starting to try and adopt that. We have solid group of guys, everyone is playing their part and trust each other.

There are a lot of good teams here  and some are having their problems. But with a change of conditions due tomorrow then it could show some different form from different teams."

Ed Baird (USA) strategist Quantum Racing (USA): "We were lucky to come from a bad position there to get back into it. We got a little tangled up at the start and Terry and Doug did a great job getting us back into it. It was not easy. We made a big gain on the first beat and then it all evaporated. We were back where we started. But the goal is always just to pass the next boat. That is all you can do. Between Terry and I looking around we found something, but then the key is that guys are always, always making sure the boat is going fast, that is the key."

Doug DeVos (USA) owner-driver Quantum Racing (USA): "We just keep at it. Don't give up. Don't get frustrated. Each and every person on board is working. Every wave downwind we are working. We just never give up."