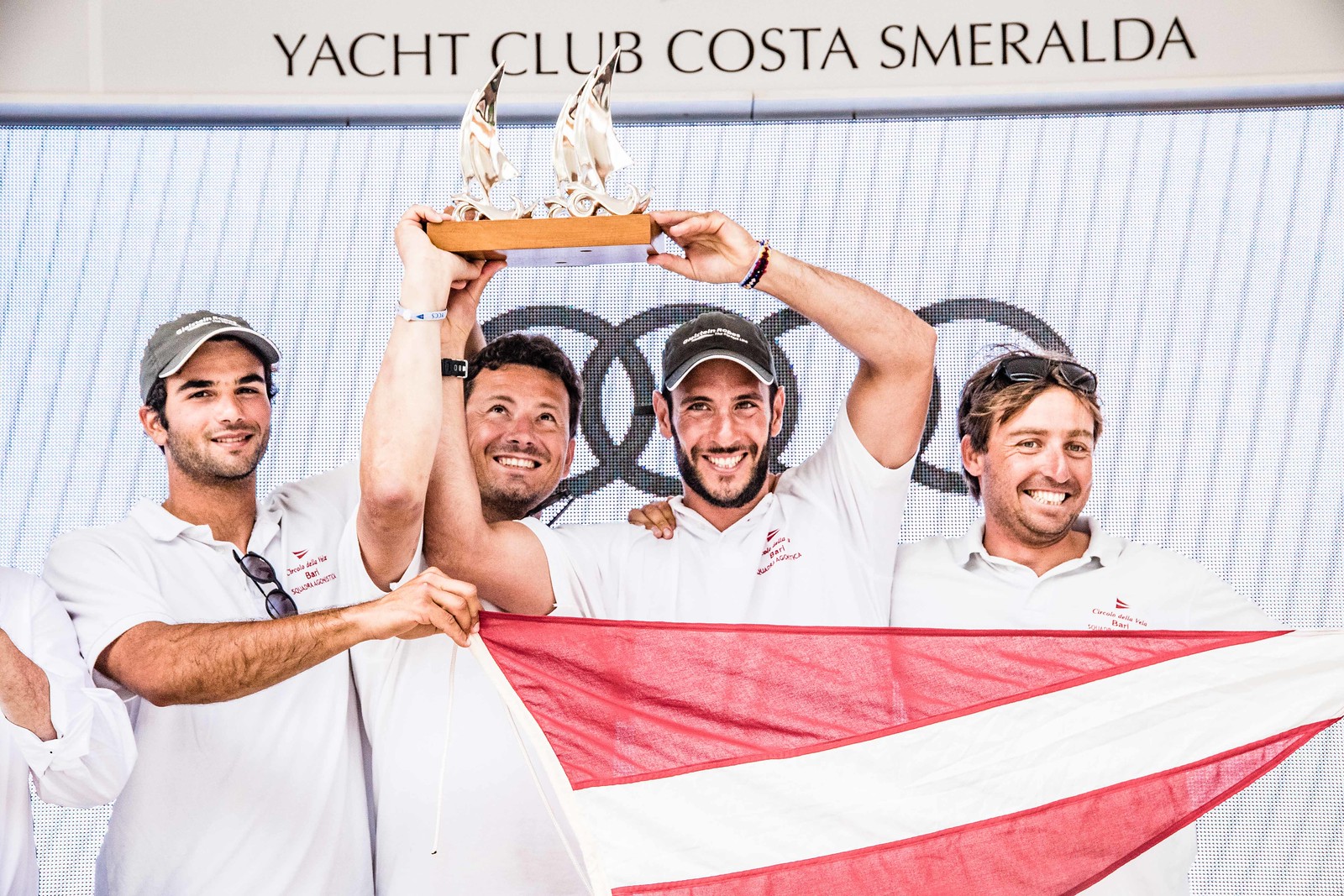 Porto Cervo, 3 June 2018. The team representing Circolo della Vela Bari, led by Simone Ferrarese, has claimed victory in the first semifinal of the SAILING Champions League in Porto Cervo. Austria's Bregenz Yacht Club took second place followed by the French team from Club de Voile St Aubin Elbeuf in third. The final, which will award the title of Best Sailing Club 2018, will be held on Lake St. Moritz from 30 August to 2 September.

The four days of racing on the waters off Porto Cervo in the Audi Sailing Champions League saw the maximum possible 18 flights held. A total of 54 spectacular and nail-biting races took place for the 22 competing teams from 13 nations aboard the YCCS J/70 fleet. The event was organised by the Yacht Club Costa Smeralda in collaboration with title sponsor Audi and the SAILING Champions League. Quantum Sails and Garmin Marine were technical partners.

The last 4 flights were completed today, kicking off at 10 a.m., in a south-easterly breeze of 6 to 10 knots. There was everything to play for right to the last, but Circolo della Vela Bari gradually consolidated their leadership over the course of today's racing. After a fourth-place finish in the first race today, the team led by Simone Ferrarese scored three consecutive wins in the following races, winning with a five point lead over the Austrians of Bregenz Yacht Club. Four points behind in third place was France's Club de Voile St Aubin Elbeuf, who scored a costly sixth place in the 18th flight.

The top 14 teams from the semi-finals in Porto Cervo have now qualified for the SAILING Champions League Final in Saint Moritz, Switzerland, from 30 August to 2 in September. A second group of yacht clubs will qualify in the semi-final taking place at the St. Petersburg Yacht Club in Russia from 3 to 6 August.

The SAILING Champions League formula allows yacht clubs to compete aboard one-design boats provided by the organisation in fast, tactical and fun races. These regattas are characterised by fair play between competitors and a female component amongst many crews. An all-female team from the Royal Danish Yacht Club took part in the Porto Cervo event, finishing in eighth place after having lead the classification at the end of the first day of racing.

Simone Ferrarese, Circolo della Vela Bari: "This morning we started practically on equal points with our direct rivals, we coped well with the pressure, especially after the first race didn't go very well, followed by three consecutive first places that clinched us the victory. A great day, I thank both my club and the YCCS! I would like to take this opportunity to adhere to the Charta Smeralda, both personally and requesting that Circolo della Vela Bari do the same."

Max Trippolt, Yacht Club Bregenz: "It wasn't easy to maintain concentration over 18 flights in four days and to find ourselves in a match race situation with the Italians, but we're very satisfied with this second place and the fact that we defended ourselves well against the French team. It was a great event, we'd like to thank the organisers of the SAILING Champions League and the Yacht Club Costa Smeralda, this is a prefect place to race."

During the awards ceremony in Piazza Azzurra YCCS Commodore Riccardo Bonadeo declared: "I would like to thank the 22 teams representing their clubs that came here from across Europe, the YCCS international jury and staff who did an excellent job, the International Sailing Association and especially the SAILING Champions League without which we wouldn't have this event that always provides excitement and fun. Special thanks go to Oliver Schwall for his support of One Ocean."

Oliver Schwall, CEO of the SAILING Champions League echoed his sentiments: "We are enthusiastic supporters of the One Ocean Foundation, the program created by the Yacht Club Costa Smeralda for the protection and sustainability of the marine and coastal environment. We must reduce pollution from plastic and other sources, taking individual action to set an example for all. The yacht clubs that are members of the SAILING Champions League, over 70 from across Europe, have committed to signing the Charta Smeralda - a code of ethics to share principles and actions for the safeguard of the sea - and to promote it to their members in turn."

The next event organized by the YCCS is the Loro Piana Superyacht Regatta from 5 to 9 June. However over the next few hours the YCCS race office team will be busy recording the timings of the IMOCA 60 yachts competing in the Monaco Globe Series, which set off today from Montecarlo, as they pass course marks in Porto Cervo.

All the daily news, photos, official documents and results from the regatta are available on the YCCS website and via social media using #yccs.