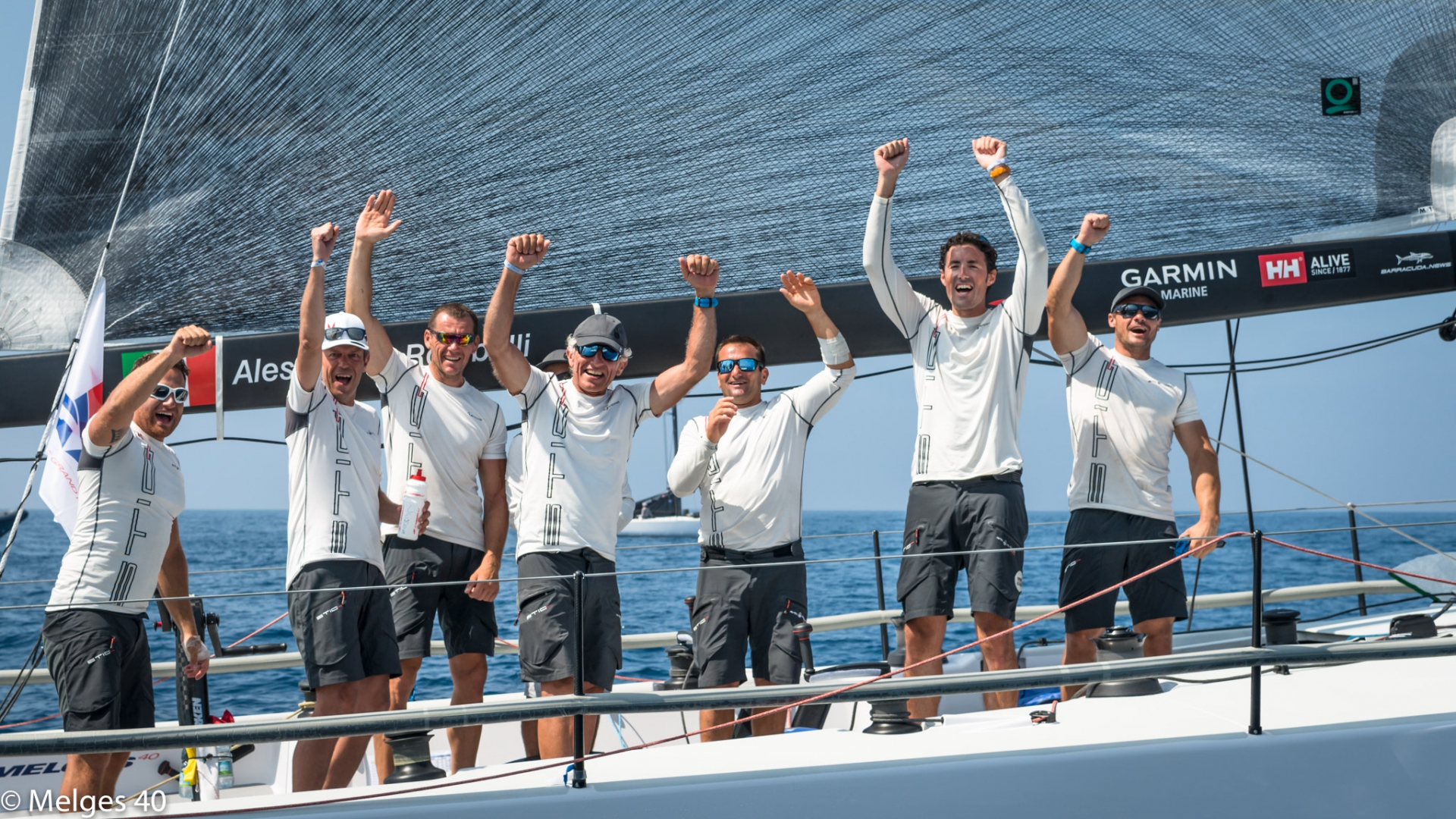 Porto Cervo, 17th June 2017. The Yacht Club Costa Smeralda has officially concluded the first Melges 40 Grand Prix event on the 2017 circuit, featuring the largest keelboat produced by Melges Performance Sailboats. The interest level throughout the yacht racing world regarding its debut in Porto Cervo has been very high, in particular due to racing canting keels on windward/leeward courses.

"Sexy, fast and different," describes Vasco Vascotto, tactician aboard Richard Goransson's INGA. "I believed in this project right away and the results we have witnessed here, fully reflects everyone's expectations. The boat is fun, and I am certain that it has a great future ahead of it."

After yesterday's double bullet scoreline from Alessandro Rombelli's STIG, with Olympic Gold Medallist Jordi Calafat on tactics, they had clearly imposed on the rest of the fleet. After as scheduled first attempt at racing around noon today, the Race Committee delayed the start, waiting patiently for a light wind to come from the North-Northeast.

At 3 o'clock, Race Three commenced with only 5-6 knots of breeze from the Northeast with INGA taking immediate control, just ahead of Rombelli, followed by Valentin Zavadnikov and tactician Ed Baird on SYNERGY, then Hannes Waimer on NIGHTSHIFT.

In the light breeze, the positions remained unchanged despite Rombelli's repeated attacks on INGA. The breeze diminished further, calling for the Race Committee to end the games with only one race complete. Competitors soon made their way back to harbor to celebrate the conclusion of the first ever Melges 40 Grand Prix.

With two bullets to his name, Rombelli at the helm of STIG was crowned Champion as he climbed atop the highest step of the podium. A grand round of congratulations are in full order for Rombelli, tactician Jordi Calafat and crew which includes Saverio Cigliano, Pierluigi De Felice, Luca Faravelli, Iztok Knafelc, Filippo La Mantia, Pietro Mantovani and Giorgio Tortarolo.

"We are delighted to have won the first Grand Prix of the Melges 40 Class," said winner Rombelli." This new class is really taking off. It is a beautiful boat and today, we managed to win the regatta and have fun with only 5-6 knots of breeze. This is a great honor to the crew, the boat and its organization."

During the informal award ceremony on the upper terrace of the YCCS, Commodore Riccardo Bonadeo expressed his best wishes for the future of the Melges 40 Class: "We are particularly pleased to have welcomed the Melges 40 in the year of celebrating our 50th Anniversary. It is with this first historic regatta that we wait to watch the Melges 40 write new chapters in the history of sailing. Thanks to you all for being with us for the debut of the Melges 40."

"The YCCS has previously hosted and organized the 2008 Melges 24 World Championship that enjoyed an outstanding level of participation. This was followed by two more World Championships for the Melges 32 in 2009 and 2013. As soon as the Class has developed and received recognition from World Sailing, we will be looking to host the Melges 40 again as well. In addition to all the owners, to Harry Melges, Federico Michetti and his staff, I would like to thank the Race Committee, the International Jury, the Class Manager and all of the YCCS team that made the first Grand Prix of the Melges 40 a great success."

"We have worked hard and are convinced that this type of boat is a huge winner," commented Federico Michetti. "We have tested the Melges 40 under all conditions and we are extremely happy. Now, we will make this the new benchmark by which all one-design boats and competition are measured."

The Yacht Club Costa Smeralda will welcome next week, from June 21-25, Audi Sailing Week, the fourth stage of the prestigious 52 Super Series circuit, in which will feature YCCS's Azzurra.

See all the daily news, photos, video, results and official documents from the regattas on our website and via social media using #yccs #yccs50.