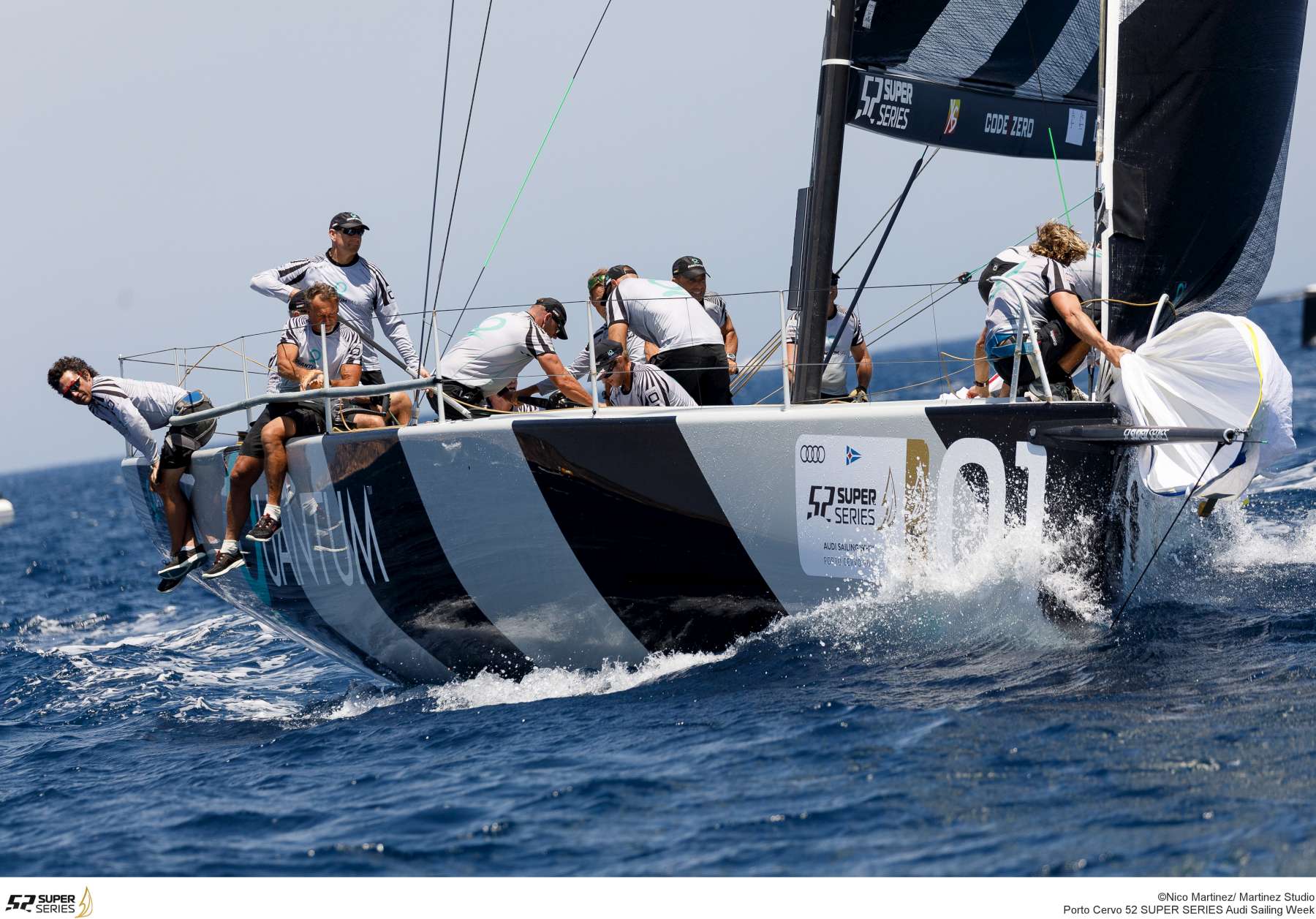 Porto Cervo, June 23rd, 2017. Quantum racing is currently in the lead of the provisional results at the Audi Sailing Week - 52 Super Series followed by Rán Racing and Gladiator, tied for points but in second and third places respectively.

It was a perfect day of racing for the highly competitive fleet in the Audi Sailing Week - 52 Super Series. North westerly winds at 18 knots died down in the afternoon to about 15 and the fleet raced in two windward/leeward races. After yesterday's win, Quantum was still in top form: even though the entire fleet was very compact today in both races, Quantum came out on top and is leading the provisional scoreboard followed by Rán who is tied for points with Gladiator.

The event, organized by the Yacht Club Costa Smeralda with the support of Title Sponsor Audi, will end on Sunday, June 25th, so there are still two full days of racing to go and anything can happen.

The tough start of the week seems to have reenergized the team aboard Quantum Racing, sailing with former America's Cup sailor Terry Hutchinson as tactician, and they seem to have hit their stride starting yesterday. They raced strong today and placed first in the first race. This is the second time that this team has won a race this event.

In the second race Quantum was passed by Tony Langley's Gladiator with Ed Baird, the winning helmsman at the America's Cup in Valencia, as tactician. After finishing fifth in the first race, Gladiator won the second race and is now in third place overall, tied for points with Rán Racing whose Swedish team placed second in today's first race but was penalized by a tenth place finish in the second race.

Terry Hutchinson, Quantum Racing: "Yes, we're in the lead with four races to go, but from here to Sunday anything can happen. It's better not to think about it, we just have to keep up the good work. Doug DeVos did a great job getting us off to a good start. First race we were going really well, as we've had in the past. After the last two events we've had great tuning sessions with Platoon who are partially quick in these conditions. We've been working on some of our setups and trying to get the boat to go faster and in race one we got results for sure. Race two was a little bit trickier. Gladiator sailed a great race, Bronenosec sailed a great race, but it was a fight between us, Azzurra and Platoon. We traded spots with Platoon and then I just sobbed on the end of the last beat. Maybe we could have fought back in the last minute, but we waited it out and that was the wrong thing to do."

Ed Baird, Gladiator: "We had a great final race, but in the first one we gave away a couple of points that we're really missing right now. Tony and the guys are sailing the boat very well and it was beautiful conditions for us today. We started to see that the left wasn't really working on the first beat and we were a bit trapped so we bailed out and got clear and were rewarded with a nice lane of breeze. We let the fleet slow each other down, but we escaped and made the right move."

Right behind the provisional leaders is Bronenosec who today dropped back to fourth place after placing ninth in today's first race and second in the second. Just a few points separate the top teams. For example, Harm Muller-Spreer's Platoon got two third place finishes today and is currently in seventh place. Alegre was very unfortunate today and dismasted shortly after the start of the second race. No one was hurt and we should see Andy Soriano's boat back on the water at the next event in the 52 Super Series at Puerto Portals, Maiorca Spain, in July.