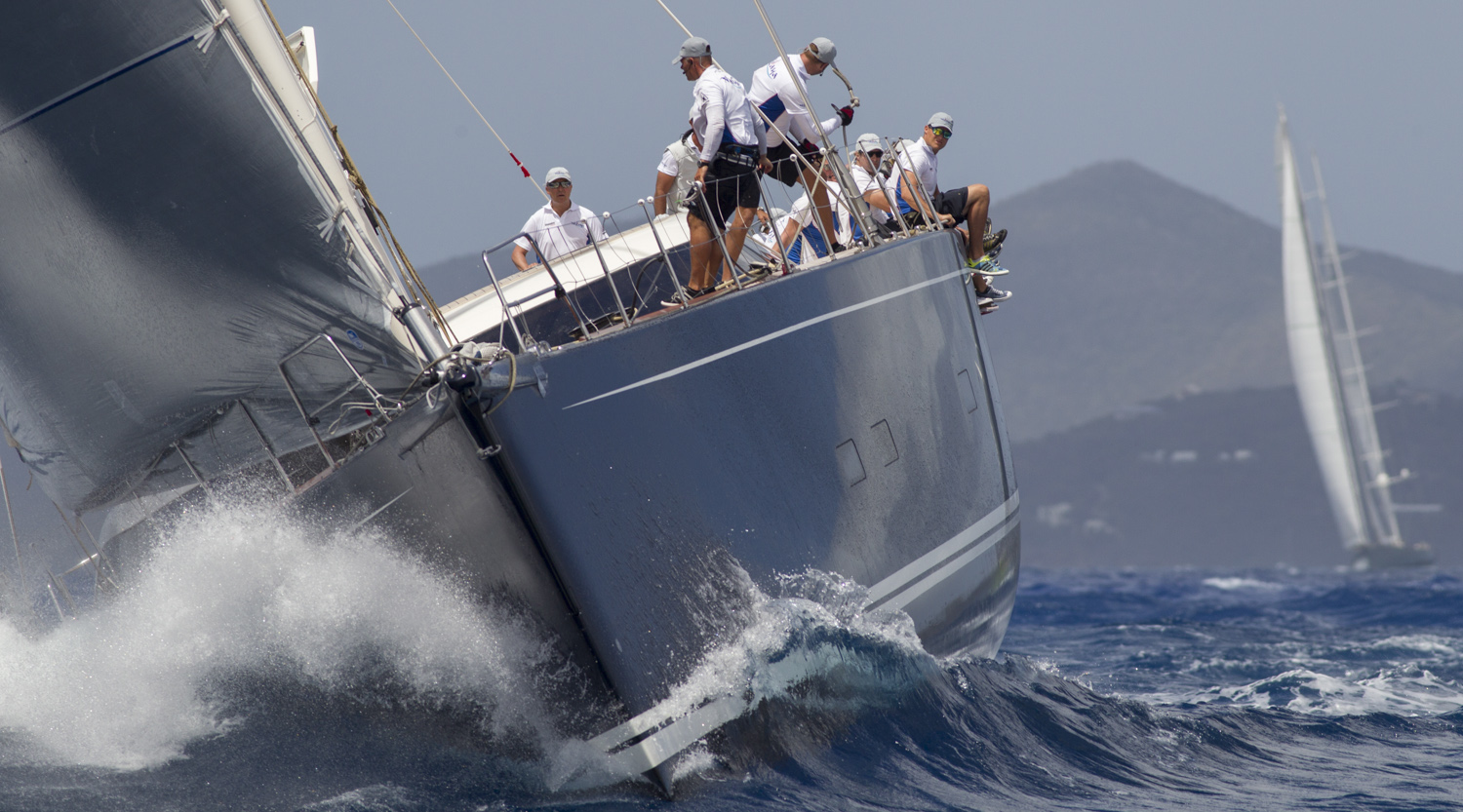 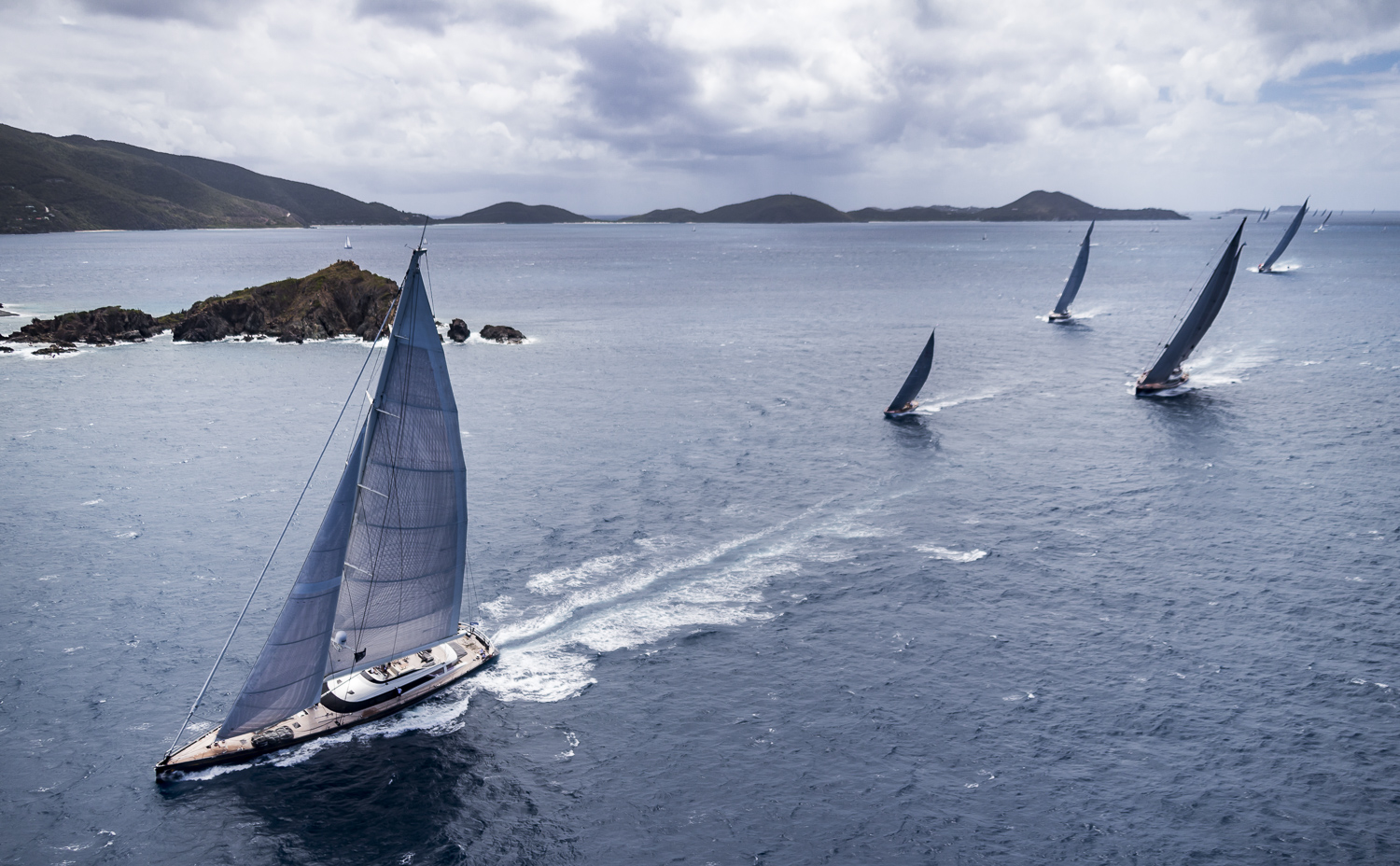 12 March 2016, Virgin Gorda, BVI. Three days of thrilling competition on the waters off Virgin Gorda concluded today with yet another nail biting race where victory or defeat - in several cases - came down to the final cross, in the final leg, of the final race. A downwind start and 20-24 knots of blustering easterly winds added further excitement to an already charged atmosphere, and the owners and crews on the 21 competing sailing superyachts gave their all in what Bouwe Bekking, tactician on Class A winner Nilaya termed “one of the best races of this year in the Caribbean.” The event, organized by the Yacht Club Costa Smeralda and Boat International, ran from 9th to 12th March at the yacht club’s winter home in the British Virgin Islands.

Class A saw the battle between Nilaya and Inoui, which had been progressing since day one, reach its conclusion with a win for the 34-metre Baltic-built Nilaya. And this despite a most spectacular spinnaker blow-out at the end of the first downwind leg.

“It was just at the last gybe,” explained Bekking. “We were on the inside and lost control of the boat and we had a big puff and we broached, and the spinnaker wasn’t strong enough for that. So that was game over for the spinnaker.”

Class B boasted a different winner on each of the three race days and today it was the turn of P2 to claim her first bullet of the event which, coupled with a disappointing fifth-place finish today from closest rival Hetairos, put victory in the bag for them.

P2’s tactician Tony Rey explained some of the challenges the crew faced this week: “This is a new boat for our team and luckily on the last day everything came right for us. It’s been a challenge for us to figure out how to do things ‘the P2 way’ but we improved each day and that was the goal, to feel like we’re sailing the boat better every time we pulled the sails on.”

Rey was understandably happy with the ORCsy rating rule used at the event: “Everyone was gathering together at the finish and that’s what pursuit racing superyachts is all about – to have us all come in at the end. It keeps it exciting for anyone watching, for the owners and guests and certainly for the sailors. This is one of the greatest regattas we do, it’s an incredible place to race.”

Class C saw a mighty battle raging on the final upwind leg which saw 43-metre Dubois yacht Bella Ragazza cross the line in first place, just 5 seconds ahead of overall winner Seahawk. Italian boat Ohana took third place both today and overall, after being penalised by an equipment failure which prevented her racing on Day One.

“Normally it is very difficult to keep superyacht owners happy but this week I think we managed to do that.” commented YCCS Commodore Riccardo Bonadeo. “My thanks go to the Race Committee, the ORC ratings team, the event staff  from YCCS and from Boat International, to our sponsor Mr Pier Luigi Loro Piana – a YCCS Member, a sailor, a good friend and a great supporter of our superyacht events – and of course to the owners and crews who make this event better each year.”

Speaking as both title sponsor and a competitor, Pier Luigi Loro Piana was able to look on the bright side of his fourth place finish in Class A: “I’m so happy with this record edition with so many boats. I have noticed that the quality and the level increases every year and I can’t seem to win here! I can’t even complain about the ratings system because it works really well.”

The motor yachts taking part in the Westport Rendezvous rounded off their programme with an entertaining scavenger hunt and lunch at Oil Nut Bay today.

The superyachts will be back racing at the Yacht Club Costa Smeralda in Porto Cervo for the Loro Piana Superyacht Regatta from 7th to 11th June. Owners are also invited to take part in the Atlantic Anniversary Regatta in 2017. Organized by the YCCS and the Norddeutscher Regatta Verein on occasion of their respective 50th and 150th anniversaries, the regatta will leave from the Canary Islands with destination Virgin Gorda in November 2017.