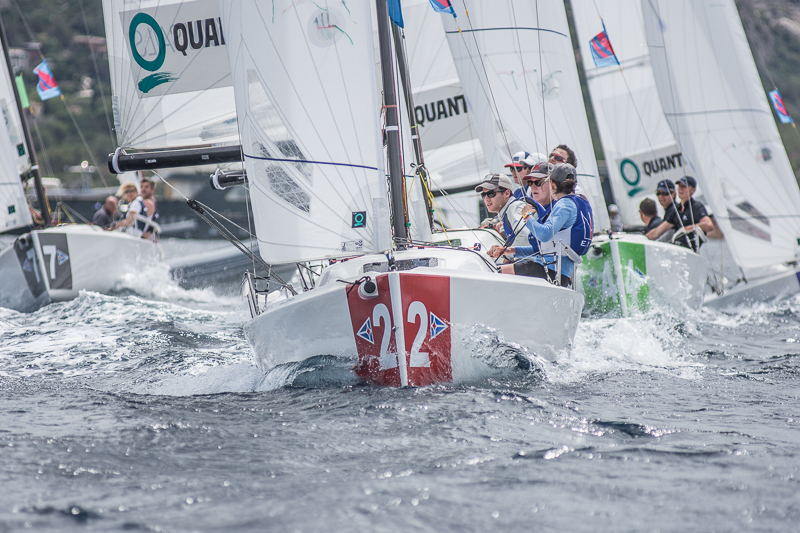 Porto Cervo, Italy. 17th June 2016. Day Two of the Invitational Team Racing Challenge saw the Stars and Stripes fly high once again as the three participating American Yacht Clubs showed their European counterparts their heels. With three round robins and a total of 45 matches now complete Newport Harbour Yacht Club sits at the top of the overall classification but faces strong competition from the New York Yacht Club and Eastern Yacht Club teams. The event, organised by the Yacht Club Costa Smeralda, will conclude with a fourth round robin as well as semi-finals and finals scheduled for tomorrow, Saturday 18th June.

In team racing each Club takes to the starting line with two boats, the objective is to ensure that one of the opposing Club’s boats crosses the line last – thereby decreeing the losing team. Tactics play an important role, as does seamless synergy between the two crews, and the sailors from Newport Harbour Yacht Club clearly had their routine down pat as they triumphed in 10 out of 10 races today. Their neighbours representing the New York yacht Club were not far behind, winning seven of the day’s matches.

The overall leaderboard, with one more round robin scheduled for tomorrow before the teams move on to the semifinal and final phases, sees Newport Harbour YC two points ahead of New York YC with Marblehead’s Eastern YC a further two points behind. The home team representing the Yacht Club Costa Smeralda remains firm in fourth place ahead of the Royal Thames Yacht Club and the Gamla Stans YC from Sweden.

Racing in this second edition of the biennial Invitational Team Racing Challenge is taking place aboard the fleet of J/70 boats belonging to the YCCS and Technical Partner of the event is Quantum Sails. Proceedings  will conclude with a final prize giving during a gala dinner at the Yacht Club Costa Smeralda clubhouse tomorrow evening.

Teams will meet for the final showdown on the race course tomorrow, Saturday 18th June, with the first signal scheduled for 11.30 and 5-10 knots of breeze forecast.