A Definitive Dozen at the Audi Settimana delle Bocche 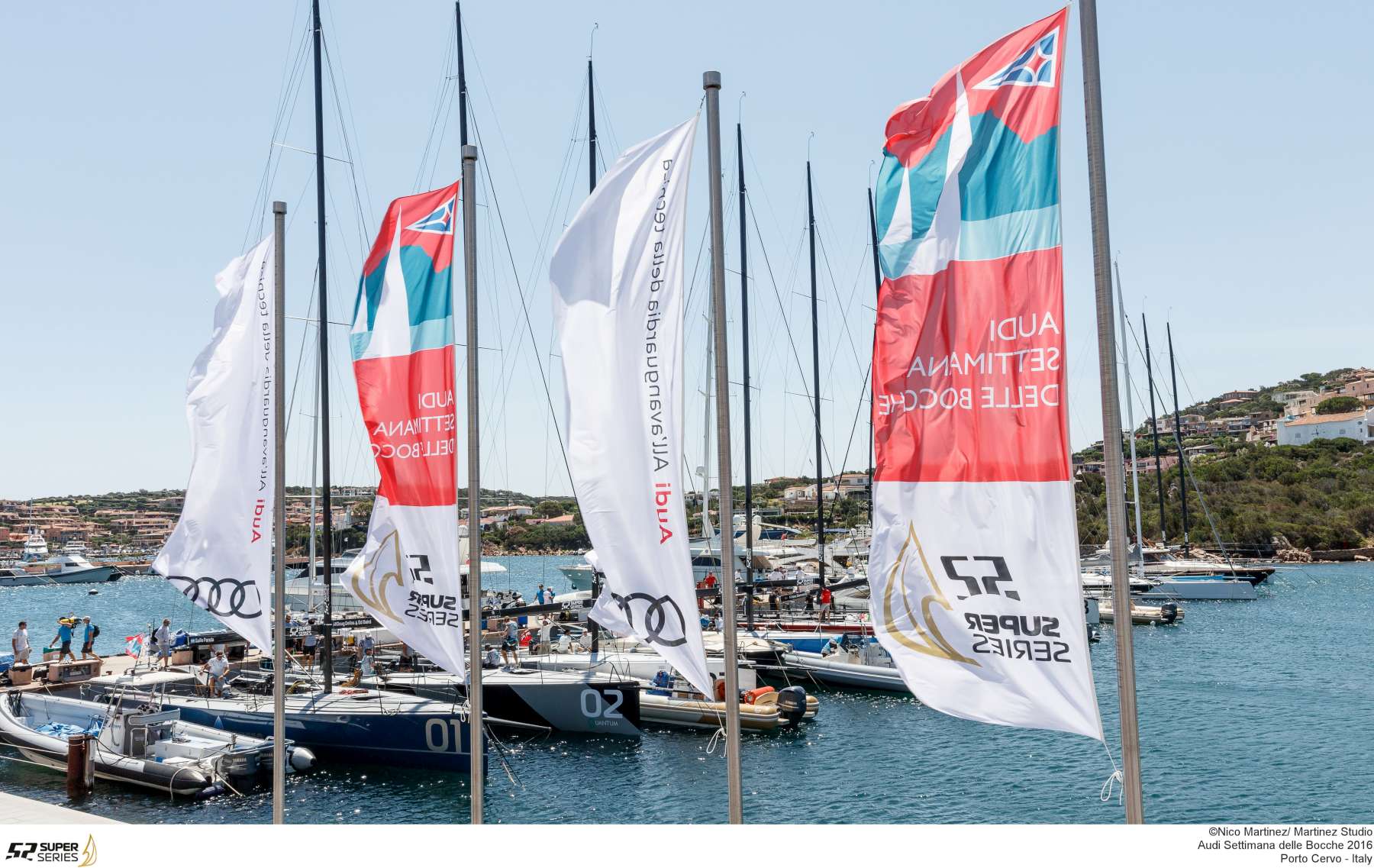 Friday 24th June, Sardinia – The 52 SUPER SERIES fleet of TP52s grows in numbers for the Yacht Club Costa Smeralda’s renowned Audi Settimana delle Bocche which starts on Monday with the first official practice race. Peter Harrison and his crew of Sorcha step into the 52 SUPER SERIES arena for their very first time at the circuit’s second regatta of five, meaning that there will be 12 TP52s starting in Sardinia.

“We have very modest expectations. We are very aware that we are the new kids on the block compared to many of the fleet who have been racing consistently and improving over the last few years. We are just looking to do as well as we can.” Confirms Campbell Field, navigator and project manager for the Sorcha programme which is the third team on the circuit to fly the GBR flag.

“We have not done much in the way of specific 52 SUPER SERIES training but raced in the Caribbean earlier in the season. We did three days of training in Palma after the boat was refitted into TP52 class trim, but that was just ticking off things. So we know we are going to be up against it. It will be an eye opener for us. But we have a good team which have sailed the boat consistently well over the last couple of years. And we have Cameron Dunn as tactician who has been around the TP52s a lot and he is not taking any prisoners in making sure we polish up our drills in preparation.”

For the Azzurra team, world champions and 52 SUPER SERIES title holders, there are hopes that the return to the home waters will return the emblematic Yacht Club Costa Smeralda team to winning ways. It was at their Sardinian home where they lit the blue touch paper to ignite their back to back regatta wins, the Settimana delle Bocche and the World Championships, which contributed so much to their series title success last year.

“We did not sail so well. We were not so fast.” Is Azzurra navigator Bruno Zirilli’s assessment of their performance in Scarlino last month, finishing fifth. “And so it is simple we need to sail better. We need to focus more on our speed. All of the boats on the circuit are faster than last year and so when you make a mistake it is worse than last year. Last year we were a little faster.”

Zirilli adds: “But we are coming back to home waters. We love the place. We love the people. It is our home and that always gives us a lift.”

The double 52 SUPER SERIES champions Quantum Racing – winners overall in 2013 and 2014 – start with the advantage of a strong winning momentum. They won in Scarlino at the first regatta of the season last month, but finished their 2015 season with wins at the Copa del Rey in Palma and in Cascais, Portugal. The impetus is very much with Quantum Racing but their Scarlino winning line up changes for Sardinia as owner Doug DeVos returns to steer for his team at a venue which he is particularly fond of. DeVos is no stranger to winning and steers to a professional level but the change of helm still requires fine tuning of the afterguard’s communication loop, especially on the start line. That said the combination of Terry Hutchinson calling tactics with DeVos on the helm is one which has proven fruitful, most recently at Copa del Rey last year.

The battle for the podium which raged hard and fast in Scarlino will only intensify on the Costa Smeralda. Andy Soriano’s crew on Alegre made a great opening to their season finishing just six points behind Quantum Racing and Harm Müller Spreer’s Platoon took third. But, as is so often stated, small mistakes result in weighty points on the scoreline. Provezza spent the week pitching on or close to the podium but posted two 10ths in the last three races and dropped to an eighth overall finish – scarcely a reflection of how well they sailed most of the time – and Niklas Zennström’s Rán Racing were podium contenders but added a 10,8 and 7 from their last four races. But in the end just eight points separated fourth from eighth after eight races.

“The last day was brutal. I don’t think I have had a worse five minute period in my sailing career.” Recalls Tony Rey, Provezza’s tactician, of their 10th on the last day which slid them down the leaderboard, “It was everything conspired against us. We went from fourth overall to eighth on that last run. And so the only way to look at it is pick ourselves up. That was one of something like 45 races, let’s just treat it as a bad race. But in the end the points are still close and we just need to keep pushing on the little things.”

Andy Hemmings, trimmer on Rán Racing concludes: “For sure the whole fleet has moved on. From the technical side we had almost a full year out of the circuit and that was reflected in Scarlino. We were a little off the pace in small areas. We have addressed those areas. But for sure now the fleet is much better at starting. Much better. Gone are the days when you could get away with a mediocre start. Everyone is on the line, on the gun at full pace. We have to keep practising to get better. Upwind we were a tiny, tiny bit off the pace and that has been addressed. You just don’t come into this fleet after a year out and expect it to all fall into place the way you want.”