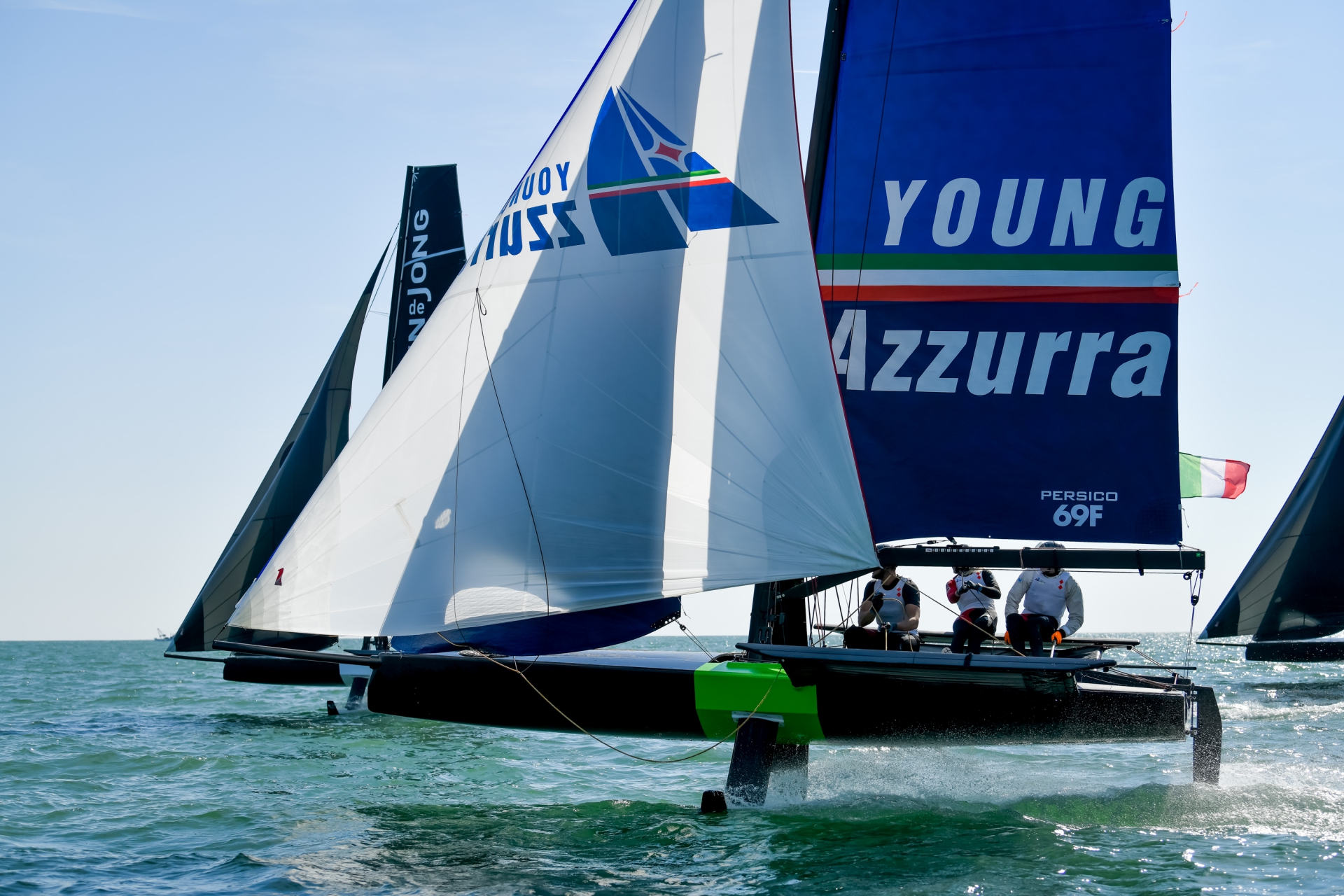 Gaeta, 12 March 2021. Today marked the conclusion of the Youth Foiling Gold Cup, a marathon event that began on 2 March and saw Young Azzurra claim second place in the overall standings. A long journey for the YCCS team made up of skipper Ettore Botticini, flight controller Federico Colaninno, the two mainsail trimmers who alternate on board, Francesca Bergamo and Erica Ratti, and coach Enrico Zennaro.

Young Azzurra qualified for the final of the Youth Foiling Gold Cup via two knockout rounds, both of which the team completed in the top half of the rankings. The qualifying phase lasted almost a week, time which the Young Azzurra team took advantage of to gain in-depth knowledge of the boat, becoming more attuned to it each day. The finals commenced on 10 March, and the competition moved to a new level in which Young Azzurra, the only Italian crew taking part, gave it their all against the five other teams left in the race: Team Dutch Sail, Team Agiplast, Kingdom Team, Southern Challenge and One Switzerland.

The first day of the finals was the most challenging for Young Azzurra, who with four races completed sat in fifth position in the provisional standings. The team took this as an important opportunity for growth and reacted in the best possible way, moving up a gear from the second day of the finals. Each time the crew found themselves at the back of the fleet, they managed to climb their way back up. The second race of day two saw perhaps the greatest highs and lows, as Young Azzurra rounded the first mark in last place, but thanks to a perfect lay line managed to recoup five positions, putting ground between themselves and the rest of the fleet. Disaster struck however, as damage to a halyard on the mainsail halted Young Azzurra's comeback and she was unable to complete the race. Following a request for redress the team was awarded third place. This unexpected setback didn't stop Young Azzurra's race for the podium for long, as the team put in highly consistent performances for the remainder of the day to claim second place in the following three races.

Today's third and final day of the event saw the fleet wait into the early afternoon for a breeze that never materialised, thus preventing any further racing.

The results obtained on the first and second day, added to the electronic points (awarded to the fastest boat in the race and the one which covered the shortest distance) and point for fair play (a classification based on the teams with the fewest penalties), left Young Azzurra in second place overall behind winners Team Dutch Sail and ahead of Team Agiplast in third.