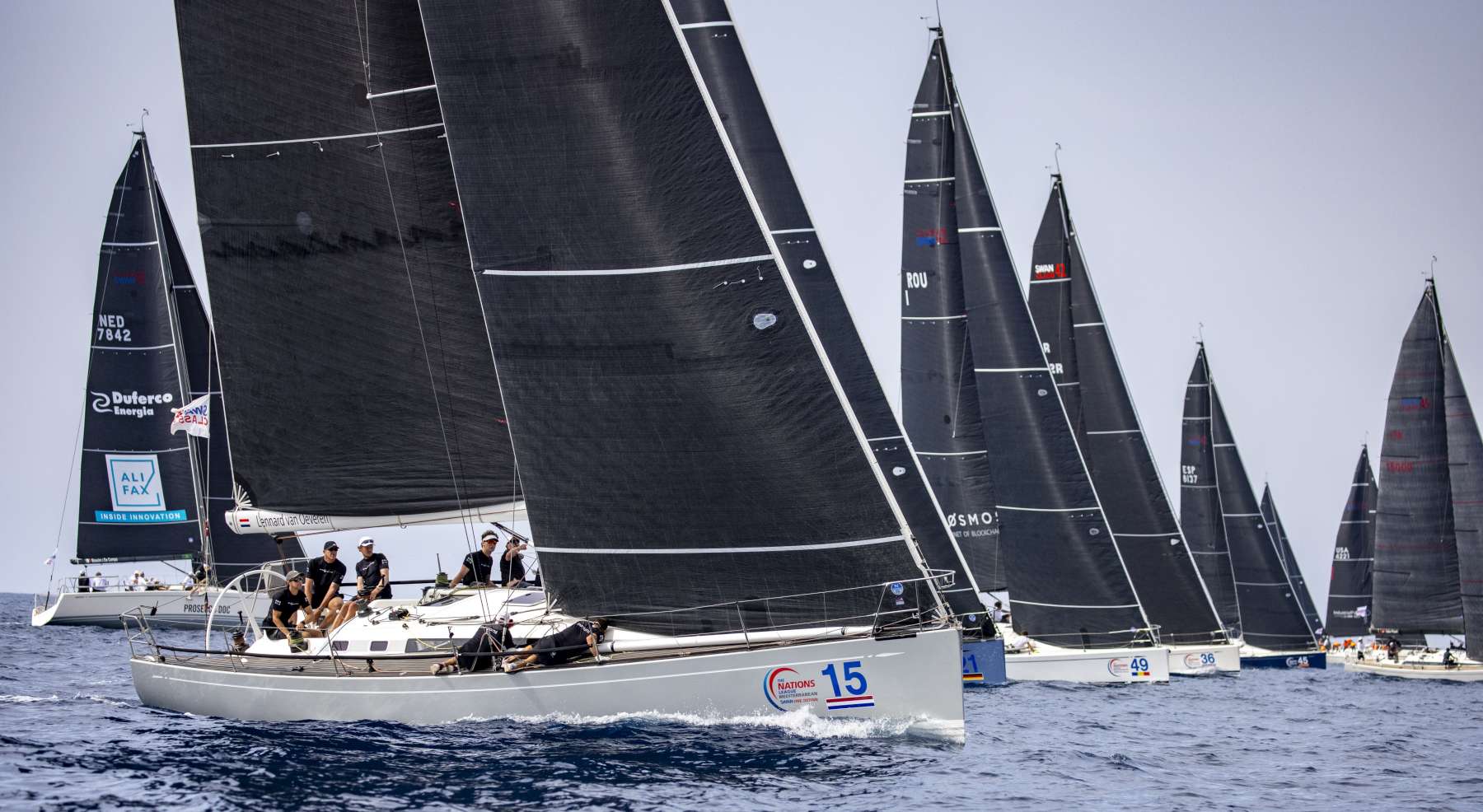 Swan Sardinia Challenge, the first day of racing in the waters off Porto Cervo

Porto Cervo, June 23, 2021. Today saw the first day of racing at the Swan Sardinia Challenge, organized by the Yacht Club Costa Smeralda in collaboration with Nautor’s Swan and ClubSwan Racing. In the lead of the various Classes racing are: ClubSwan 50 Earlybird, G-Spot leads the ClubSwan 36es, Koyré – Spirit of Nerina leads the ClubSwan 42s while Fever is currently first in the Swan 45 Class.

The Race Committee, headed by PRO Arianne Mainemare, headed out to check the waters looking for a spot with the proper conditions for racing knowing well that the forecast was for very light air until a Mistral breeze kicks in tomorrow. The teams aboard the racing fleet of 34 yachts representing 12 nations waited at the docks in the Porto Cervo marina while a breeze from the east southeast filled in. At 14:45 CEST the Race Committee lowered the AP flag ashore and at 16:00 racing began. The first race in the Swan Sardinia Challenge got underway in breeze at 6-8 knots.

Conditions were difficult to call, especially for tacticians, who had to find a way through holes and wind shifts that let some teams make spectacular recoveries. An example is Fra Martina’s third place. Sailed by the Pavesio brothers with ‘Checco’ Bruni and ‘Rufo’ Bressani also aboard, they managed to fight up from the back of the ClubSwan 36 fleet and finish just two places behind Giangiacomo Serena di Lapigio’s G-Spot, sailing with tactician Michele Paoletti. Second place in this Class for Andrea Lacorte’s Vitamina with Alberto Bolzan tactician. “We came here to win,” said Serena di Lapigio. “Even if we know that isn’t always possible. Today went well because in light conditions the right side of the course is always a toss-up. Luck plays its part and we had fun out there.”

Racing was close in the ClubSwan 50 Class too, where the German team aboard the red-hulled Earlybird, helmed by Hendrick Brandis, found good pressure and rounded the mark first, followed by the Russian team aboard Sparti, who got a good start on the pin, neck to neck with the Swedes aboard Regina 2.0. The leading teams sailed in clean air and controlled each other staying in the same positions to the end of the race. “We’re happy that we managed to race,” said Brandis as he disembarked. “It was a tough race because the wind was shifty and unstable. We think we were lucky because we picked the right side and that made the difference. Once you’re in the lead everything is easier and we could lengthen our advantage and get this win. We’re happy and we needed it because lately a couple of regattas haven’t gone the way we hoped. We’re happy to be back!”

The Swan 45 and ClubSwan 42 fleets sail together considering that the two boats have similar performance characteristics. Klaus Diederichs’ Fever was at the head of the fleet right away and won the Swan 45 Class, followed closely by Stefano Masi’s Ulika and Motions owned by Lennard van Oeveren. It was a photo finish ending for the ClubSwan 42s too with Koyré, helmed by Luca Formentini in first place followed by Nadir owned by the Spaniard Vaquer Comas and Dralion owned by Pit Finis.

Marco Caglieris, navigator aboard the ClubSwan 42 Koyré – Spirit of Nerina had these words: “We couldn’t have had a better start. The conditions were light and unstable with breeze at just 5 to 10 knots with lots of holes and shifts, so it was hard to read. An applause goes to our tactician, Roberto Spata”.

Quantum Sails, sponsor of the first day of racing at the Swan Sardinia Challenge gave prizes to the day’s winners in Piazza Azzurra.

Racing will continue tomorrow at 12:00 CEST with a Mistral breeze at 13 to 20 knots predicted in the late afternoon.

For the results, entry list, the official documents, event programme, photos and further information please visit the dedicated section on the YCCS website or contact the YCCS Press Office.