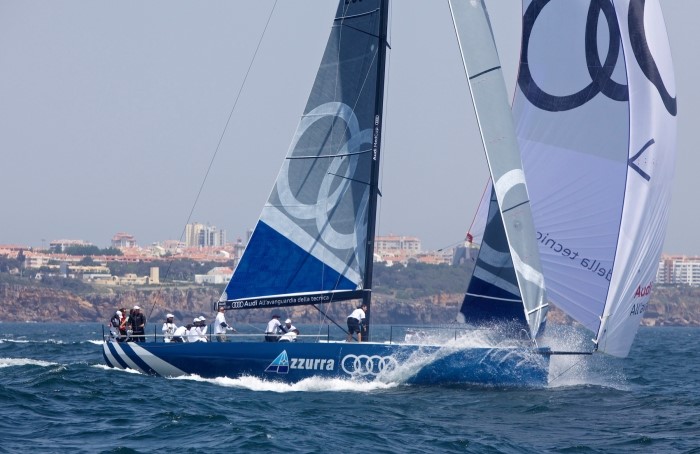 The Princess Zahra Aga Khan baptised the first TP52 version of Azzurra in Cascais on May 17, 2011. Even though the 2020 season has been suspended due to the Covid-19 pandemic, this is the tenth season that Azzurra, the Roemmers family’s boat and the Yacht Club Costa Smeralda’s sporting symbol, has been competing in this highly competitive circuit. Skipper Guillermo Parada and the YCCS Commodore Riccardo Bonadeo share their memories.

The tenth season started with a win in Cape Town, then everything came to a halt. How is the team holding up in these troubled times?
GP: These are very sad times the world over, lots of people are suffering and lots have lost loved ones. Those who haven’t been directly affected by this pandemic are the few and the fortunate. Right after health considerations come considerations on our freedom, we are all more restricted now. Restricted in how and where we can work, in seeing our friends, in sailing. The whole team is constantly in contact, we even have a virtual dinner planned from Sarah’s house, she’s the one who prepares our dinners during the regattas in the houses the team shares during events. That will be a nice moment for all of us. We have been together for almost 20 years having sailed together previously aboard the yachts that Mr. Roemmers raced before Azzurra. We’re together for about 100 days a year: we miss our group. And I miss our rivals aboard Quantum and everyone else!

May 17, 2011: Azzurra was baptised in Cascais. Do you have any memories of that day to share?
GP: That day was the official beginning of a new path, both for the sport in general and for me as a professional sailor. The YCCS honoured us by letting us use the name Azzurra, an important inheritance in Italy because Azzurra was the name of the first Italian challenger at the America’s Cup in 1983. Her success at this world famous event exceeded everyone’s prognostics and introduced high-level competitive sailing to Italy.

Now that the years have passed I can tell you a little background anecdote: back in 2011 I was really worried that the date 17 would bring bad luck. On the same day Azzurra was being baptised there was another Audi-sponsored boat, All4One, that was baptised right before us. I remember that the model who was baptising the boat couldn’t get the bottle of champagne to break. That we all know is bad luck! Luckily our godmother, the Princess Zahra Aga Khan broke hers, even though it took more than one try.

Azzurra’s first season was tough: the wind was generally light but the boat was optimised for moderate to heavy conditions. Even though it was an uphill battle, at the end of the season we were on the podium, in third place. I still have some regrets from that season: at the event in Cartagena we were in the lead of the coastal race that was worth two points back then. We broke the mailsail halyard at just 100mt from the finish line and lost eights points after having lead the race for 35nm. If that hadn’t happened we probably could have placed second in the season overall. At the final event in Barcelona we slipped back to third place overall behind Bribon because the wind was light. Even though we didn’t get the results we wanted in that first season aboard Azzurra we learned so much that the following year, the first year of the 52 Super Series, we won the championship. The final battle with Quantum in Valencia was epic.

Azzurra started the first season with number 2 on her bow, then she won four 52 Super Series titles and a World Championship. Looking back what do you see?
GP: I see nine good years and the tenth year that got started with a win that shows how strong we are as defending champions. Thanks to the lockdown and the consequent stop to the season our win in Cape Town means that we’ll stay defending champions that much longer even though we’d rather be out racing.
Jokes aside, looking back on past seasons I see a positive trend that could have been even better. For example, we lost a couple of World Championships by a hair like the one in Miami where our gennaker clew slipped during the hoist at the final mark, letting Ran get by us to win the race and the Championship. At any rate, it’s important to learn from your mistakes and look towards the future with a positive outlook. You have to always want to improve.

Teamwork is currently more important than ever, what is the secret to keeping a solid and united team like Azzurra’s? What role do the owners play in all this?
GP: When Alberto W. H. Roemmers started this adventure 20 years ago, even before Azzurra, he could easily have called in the most expensive and famous sailors in the world to make a top team.  Instead he took a longer route: he decided not to call in just the big names, but to construct a team by giving opportunities to younger sailors. We have always tried to have a few very expert sailors aboard so that the team can grow. Over time we have become very united, a real team and not just a crew.  We know each other so well, for better or for worse, and we know that together we’re stronger. Lots of the merit goes to Azzurra’s owners, as far as I’m concerned I think I have made suggestions that have been as clear and as transparent as possible. For the past ten years Alberto’s sons have taken over the leadership from their father but they have kept the same values, winning races and the respect of their adversaries that is as important as winning a race. For myself, in my role as team leader I am very proud to see the respect that Azzurra has won from the best teams in the world.

What is your fondest memory from the past 10 years?
GP: I have two: From a sporting point of view the conclusion of the 2012 season that I already mentioned. We were head to head with Quantum, we started 6 points behind and finished 5 points ahead. A true triumph. On a human level during the Rolex World Championship in 2015 in Puerto Portals: Alberto Roemmers Jr. was helming Azzurra and I was recovering from an operation. We ended that event with an advantage that was so large we were practically assured of the season’s win. Which in fact we got at the final event in Cascais, one race before the end of the season, with the whole Roemmers family there to watch. That was an excellent, maybe even an unbeatable, season.

Another unforgettable win was the one on your 52nd birthday, at YCCS, Azzurra’s home waters...
GP: Right! We have to add this third memory. Just recently I posted a photo from the party we had on the YCCS terrace on my Instagram account. That was unforgettable. I want to win the 52 Super Series again, but I’ll never be able to do it again on my 52ndbirthday. It was an exceptional combination of numbers that day, as if the 52 Super Series and I were made for each other. This adventure will continue.

You’re Argentinean and Italians with just one Kiwi, Grant “Louie” Loretz, aboard. How is he doing?
GP: 2013 was his first season aboard Azzurra and it must have been hard for him. Louie was coming from ETNZ, a more complex and corporate structure than ours. But he wasn’t the only English speaker aboard and he had already sailed with us in 1999, on the maxi yacht Alexia, that’s when we met. He adapted to our style and maybe we have become more Kiwi too. For sure now he’s part of the family.

What are your hopes for the immediate future?
GP: I hope for what everyone is hoping for these days: that the world will soon find its way out of this pandemic. After that I hope to get back to sailing as soon as possible, we want to defend our title as 52 Super Series champions.

Riccardo Bonadeo, as Commodore of the Yacht Club Costa Smeralda and the former CEO of the Consorzio Azzurra for the America’s Cup, shared these words: “We were planning on celebrating Azzurra’s tenth season during the 52 Super Series event scheduled to be held in Porto Cervo, but health and the respect for government regulations come first. Now our plans have changed and we’ll celebrate as soon as possible the Azzurra’s tenth anniversary in the most competitive circuit in professional sailing. The past years have seen Azzurra face great challenges on the water and enjoy important successes, time has flown by. None of this would have been possible without the dedication of our club members, the Roemmers family who I want to thank more than ever, both on my own part and on the part of the YCCS. Thank you for bringing our burgee to Azzurra’s successes, thank you for having built this high profile team, the 52 Super Series’ defending champions and winners of the 2020 season’s first event in March in Cape Town. I also want to thank the Princess Zahra Aga Khan, who has baptised all four of the boats named Azzurra that we have built in the past years. When, on the 17th of May, 2011, the Princess baptised the first TP52 version of Azzurra, I couldn’t help but think of the continuation her presence represented after the Azzurra 12 Metre Class yachts that had been baptised by her mother the Begum Salimah.”