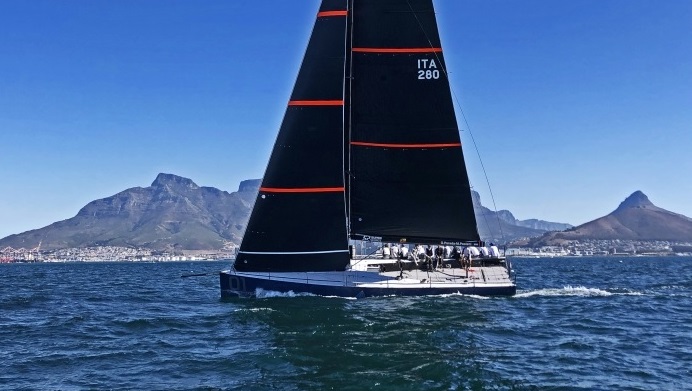 The boat flying the Yacht Club Costa Smeralda’s burgee is in Cape Town ready to defend her title as 52 Super Series champions won last season for the fourth time in eight editions.

Including the defending champions aboard Azzurra, there is a fleet of ten TP52s gathered in South Africa ready to begin the 2020 52 Super Series, the most competitive circuit for professional keel boat racing, in the waters off Cape Town. Monday March 2, the First Warning Signal is scheduled for 12:30 local time (11:30 CEST) with the forecast calling for fresh “Cape Doctor” breeze from the southeast.

The 2019 season ended in September and saw Azzurra edge out Platoon and Quantum to win the 52 Super Series in Porto Cervo, her home waters. But it’s important to remember that while Azzurra won the season, Sled won the event with the best score overall ever for an event in this circuit. Sled’s score of 1,77 points beat the previous record of 1.87 points that Azzurra set in Porto Cervo in 2013 and can be seen as a warning for the whole fleet including Azzurra: Sled was unbeatable in stronger winds.

An advantage for the American team came from the fact that they didn’t participate in the Cascais event where the other teams used their strong wind sails, so their sails were newer going in to the final event in Porto Cervo. But it wasn’t just a question of fresher sails: Azzurra’s team worked to fill in a technological gap. Working with Mercurio Tecnologías Navales, a company founded by Alberto and Pablo Roemmers and based in Valencia, Azzurra’s team worked to improve her performance, especially in stronger air. The team focused on aerodynamics, with new profiles and new composite materials for the sails, new shrouds and a wider range of tuning possibilities for the mast. The team began working right after the win in the 2019 season so that they could test the improvements in the training sessions held in Valencia in December before shipping Azzurra and her equipment off to Cape Town.

Guillermo Parada, skipper: “Finally it’s here, we can’t wait to begin the 2020 season and see if the modifications we have done to our sails and rigging over the winter and tested in Valencia before Christmas work the way we’re hoping they will. You never change a winning team, but we do have one new addition this season: our tactician Michele Paoletti. A warm welcome goes out to him on the part of the entire Azzurra family. Michele is a friend and a world class sailor and is taking over Santi Lange’s role while he trains for the upcoming Tokyo Olympics.”

A versatile and experienced sailor, Michele Paoletti is back sailing aboard a TP52 after a string of successes in the MedCup, where he won the Championship in 2005 sailing as tactician aboard Mutua Madrilena.

Born in Trieste in 1974, Paoletti sailed for Italy in the 2000 Sydney Games aboard a Soling with Nico Celon and Dede De Luca. He also won the European Championship Match Race in 2001 and competed at top level in the Laser Class until 2003. As a Finn sailor he has won two national championships and has represented Italy in the London and Rio de Janeiro Olympics. Paoletti competed in the 32nd America’s Cup in Valencia as strategist aboard Mascalzone Latino and has a string of victories in offshore races ranging from the IOR Quarter Tonners from the early 1990s to a win in the Maxi Yacht Rolex Cup in 2010. Paoletti has specialised in One Design Classes from Melges to J/70s, where he won sailing as tactician in three European Championships including the 2019 edition in Malcesine. His latest victory was December 8th in the South America J/70 championship in Punta de l’Este.

“The 52 Super Series is the queen of circuits both from a sporting point of view and in terms of technology,” Paoletti says. “It’s a great honour for me to be back sailing aboard a TP52 like Azzurra, part of a team of defending champions. This group is special, both as people and as sailors. I’m picking up a baton passed to me by two previous Azzurra tacticians: Vasco Vascotto and Santiago Lange. Under their direction the boat flying the YCCS burgee has won four of the eight seasons they have competed in so I have to do my best and keep up the tradition.”

The Cape Town event is named Odzala Discovery Camps 52 Super Series & Waterfront and will see Pedro Rossi temporarily substituting the grinder Alejandro Colla, who competed for Argentina at the Athens Olympics, aboard Azzurra. The event will end on March 6th, but the 52 Super Series fleet will stay in Cape Town for the Rolex TP52 World Championship that will be held from March 31st to April 4th, 2020.

The fleet and all of the team’s containers will then be loaded onto a cargo ship for the return trip to the Med where the season will continue with four events including the Royal Cup in Scarlino in May. In June the Yacht Club Costa Smeralda will welcome the fleet in Porto Cervo, where they will celebrate the 20th anniversary of the TP52 Class by inviting other TP52s not competing in the Super Series to attend. Then there will be an event in Valencia in July and the Series will conclude in September in Puerto Portals. Azzurra will also compete in the Copa del Rey in Palma de Mallorca from August 1st to 8th.

YCCS Commodore Riccardo Bonadeo sums it up with these words: “Azzurra is our club’s sporting symbol and she won the previous 52 Super Series, her fourth win in the circuit, in her home waters in Porto Cervo last September. This result says much about the quality of her team and the professionalism that our club members, the Roemmers family, brings to the table. We know how hard it’s going to be to defend the title with the number 1 emblazoned on Azzurra’s hull, but in the name of the YCCS I want to take advantage of the opportunity to thank the Roemmers family and the whole team for the results that they have brought home and for their hard work: let’s hope for new successes! Thanks to the Roemmers the YCCS burgee is in Cape Town again: here two VOR60’s flying our colours did a stopover in the 2001 Volvo Ocean Race.”

Racing starts tomorrow, Monday 2 March at 12:30 and can be followed on the tracker Virtual Eye, on the website azzurra.it, on the 52superseries app or the website 52superseries.com. Scheduled starts for all race days is at 12:30 local time (SAST, South African Standard Time is CEST +1h.) Live updates from the race course will also be posted on Azzurra’s Facebook page.