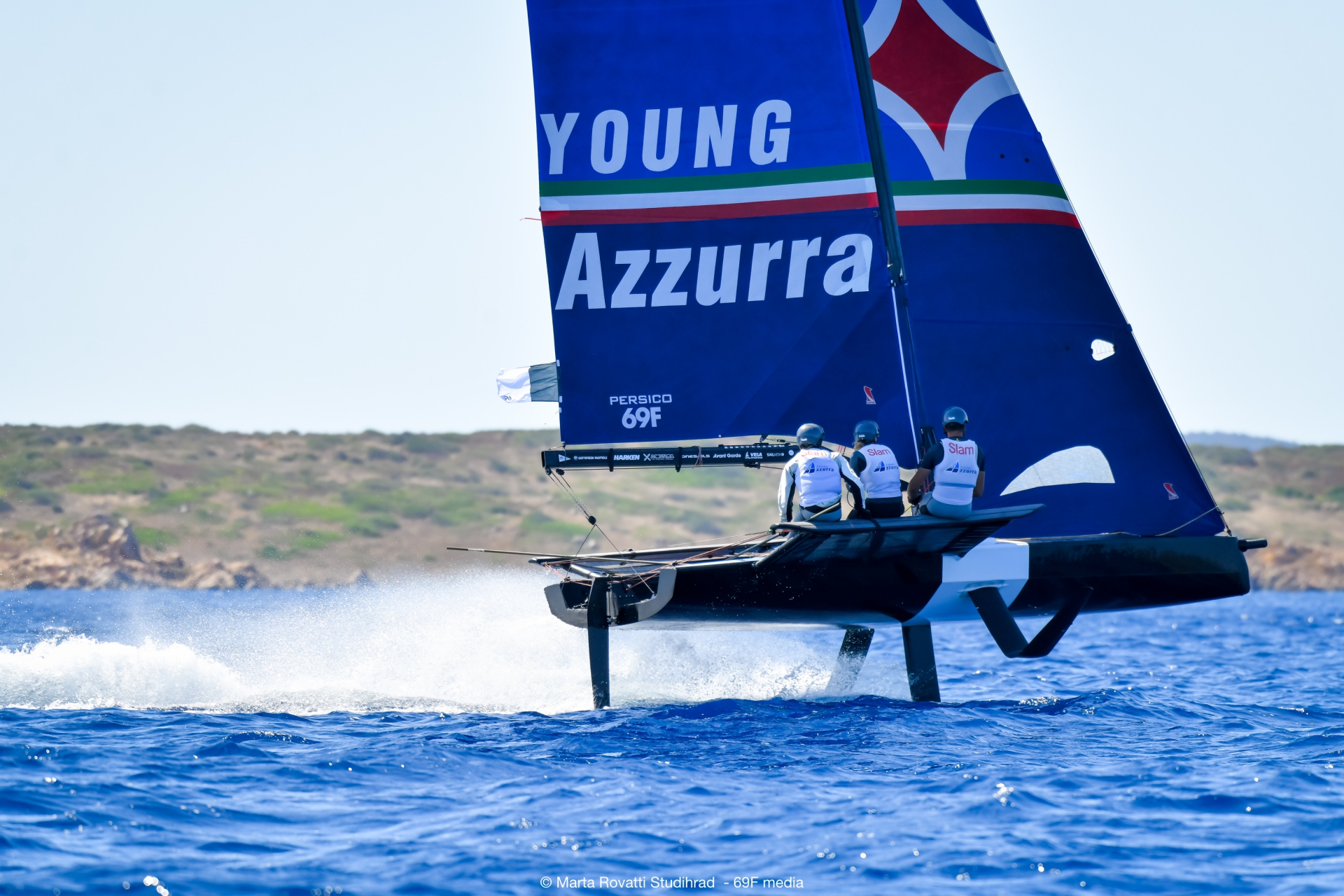 Cagliari, 3 November 2021. The Grand Final of the Youth Foiling Gold Cup concluded today with the Young Azzurra team ranking fourth in the overall classification. Mainsail trimmer Federico Colaninno suffered an injury after capsizing yesterday, and the rest of the crew and the YCCS wish him a speedy recovery.

This morning brought the decisive day of the final of the YFGC circuit, and Young Azzurra took to the water with Ettore Botticini at the helm, Francesca Bergamo on the mainsail and Erica Ratti as flight controller. In the first race, a less than perfect start conditioned the remainder of the proceedings, with the team managing to recoup one place to finish fifth. Young Azzurra also placed fifth in the second race of the day. The last race was a decisive one thanks to quadruple points being up for grabs, and the team did its best to claim the third step on the podium, battling Team Argentina on the last leg but crossing the line just behind the Argentinian team. Today's results added to those of the previous two days, plus the electronic points and those awarded for fair play, leave Young Azzurra in fourth place overall in the Grand Final of the Youth Foiling Gold Cup, with victory awarded to the Dutch Sails team.

This final event brings the Young Azzurra sporting programme to an end. Launched in 2020 by the Yacht Club Costa Smeralda, the aim of the project was to form an Italian team to participate in the Youth America's Cup in Auckland, which was then cancelled due to the pandemic. Despite this cancellation, the project ran throughout 2021, participating in the Youth Foiling Gold Cup and drawing to a conclusion with the circuit's Grand Final. A campaign that was set to run for four months instead continued for a year and a half, highlighting the remarkable spirit of adaptation of the athletes involved and their supporting Club, the YCCS.

Michael Illbruck, YCCS Commodore: “Looking back, we certainly could not have imagined how far we would travel with Young Azzurra. The project was in fact created to take part in the Youth America's Cup, and when that was cancelled we decided to carry on this adventure to encourage the development of these young sailors who up until today have represented the YCCS on the regatta course. This year we took part in four Grand Prix events in the Persico 69F Cup and three intense legs of the Youth Foiling Gold Cup. It was a new challenge, which brought tremendous growth, both for the team and for the YCCS. We are happy with what we have managed to achieve, and the things we have learned on this journey will guide us in the development of further opportunities for other young sailors in the near future. On behalf of the YCCS, I wish to thank all the members of Young Azzurra - Ettore, Federico, Francesca and Erica - for their commitment, sacrifice and dedication. Our thanks must also go to the two coaches, Enrico Zennaro and then Gabriele Bruni, who assisted and trained the crew.”