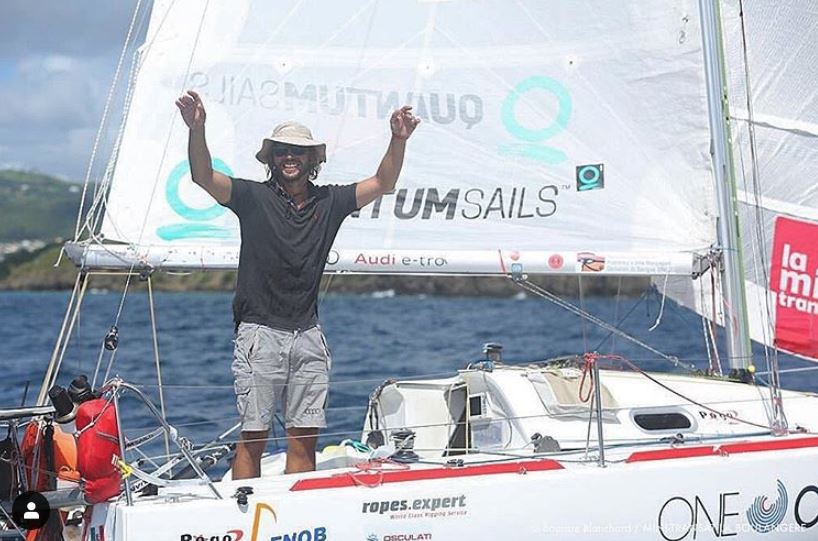 Porto Cervo, Italy. 21 November 2019. A long journey that commenced in 2018 has come to a conclusion for sporting member and One Ocean representative Daniele Nanni, supported by Audi and Quantum Sails.

Yesterday afternoon, 20 November, Nanni finished the Mini Transat 2019, arriving in Le Marin, Martinique, after almost 20 days of navigation on the Atlantic Ocean. Up to about half way through the crossing, Daniele was well positioned within the fleet in 25th position, but due to subsequently hitting a windless hole, he unfortunately dropped back in the ranking.

The Mini-Transat was held for the first time in 1977 and involves a course of 4,050 miles divided into two stages. The first leg runs from La Rochelle to Las Palmas (Canary Islands), along a route of 1,350 miles, while the second and longer leg, from Las Palmas to Le Marin, Martinique, covers 2,700 miles - for a total of approximately 30 to 35 days of navigation. The classification is divided into two divisions: the "Prototype", Mini 6.50 craft built with more advanced and experimental technologies and materials, and the "Production" boats belonging to the same class but built with similar and less experimental characteristics, in which Nanni raced.

In order to qualify for the Mini Transat, the young sailor had to meet a series of qualifying requirements, including 1,500 miles of solo sailing and 1,000 miles of racing, and was faced with various difficulties at sea. Confirmation from the Mini class of his qualification to participate came in late August, just a short time before the race start.

The long preparation for a solo race recognised as one of the toughest in existence allowed the skipper to get to know the boat's potential and its limits.

When Daniel was asked what prompted him to take on this challenge he said "The motivation is passion. The French call it the 'esprit Mini'.” This very passion drove him not only to cross the ocean, but also to act as a spokesman on the theme of environmental protection, representing the One Ocean Foundation and its mission of safeguarding the sea.

YCCS partners Audi and Quantum Sails supported Nanni, believing in the motivations that pushed a young sailor to go beyond his limits.