One year ago, on 14 August 2020, the Young Azzurra team made their debut in Gargnano, on the Brescia side of Lake Garda. Since then, the YCCS' foiling programme dedicated to talented young Italian sailors, and with a focus on equal opportunities, has racked up numerous successes. The latest of these was clinched in the team's very own home waters, in Costa Smeralda, with victory in two Grand Prix events organised by the YCCS as part of the Persico 69F Cup circuit. The team, led by skipper Ettore Botticini, with Federico Colaninno in the role of flight controller and female crew members Francesca Bergamo and Erica Ratti alternating as mainsail trimmers, was selected for the Yacht Club Costa Smeralda's scheduled participation in the Youth America's Cup in Auckland. The event was cancelled due to the pandemic (the Prada Cup and the America's Cup were held thanks to a special law enacted by the New Zealand parliament, as the nation had closed its borders to limit the spread of the virus). 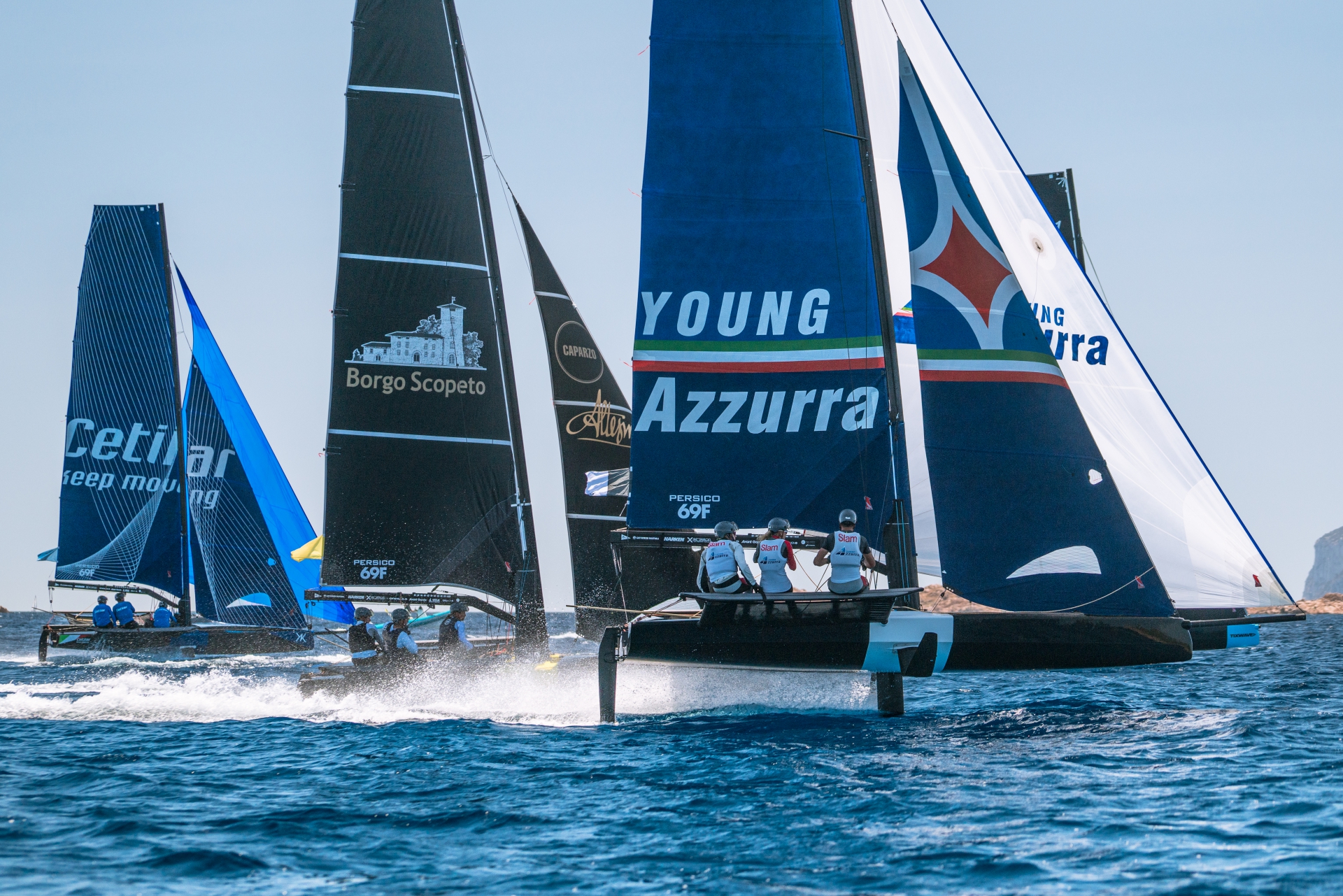 However the project, created and developed to carry forward the name and story of Azzurra, has continued in its aim of offering opportunities for sporting and the professional development to young people and Young Azzurra is competing in two different series of international competitions this year: the Youth Foiling Gold Cup - raced under the same rules as the Youth America's Cup, by youth teams from various Clubs, with an under-25 age limit and gender equality - and some of the legs of the Persico 69F Cup circuit. The Young Azzurra team achieved second place in the first leg of the YFGC in Gaeta and, under the guidance of new coach Gabriele Bruni, won the Grand Prix 1.1 of the Persico 69F Cup in Malcesine.

From the lake waters of Garda, the team moved to Porto Cervo for the Grand Prix 2.1 and 2.2 of the Persico 69F Cup circuit from 5 to 17 July. The mistral wind and different wave motion on the sea made for more challenging foiling. For Young Azzurra it was a winning race debut in home waters, following a training session in the Costa Smeralda in the autumn of 2020.

Ettore Botticini, skipper of Young Azzurra, commented at the conclusion of racing: “Winning both events of the Grand Prix 2 in Porto Cervo was not a foregone conclusion, we raced well and managed to place well, even when things were not going in the right direction. We are very satisfied with the work done in these 2 weeks with the waves and sustained winds, even touching over 20 knots. The boat easily reached 30 knots of speed and managing the physical efforts of the crew on board was complex. But we did it and we feel ready for the next leg of the Youth Foiling Gold Cup in August in Limone sul Garda!”

The next appointment with the YCCS team aboard Young Azzurra is from 13 to 26 August, while the final event is scheduled for Cagliari, Sardinia, from 18 October to 3 November. During events, updates are posted on Young Azzurra's Instagram and Facebook profiles, with photos, videos, results and short interviews.