In August 2001, in Cowes, the birthplace of yachting and that 100 Guinea Cup which would later change its name to the America's Cup, a fleet gathered that told the entire history of yachting, from the mid-1800s to the beginning of the new millennium. In 2001, the 150th anniversary of the first America's Cup was celebrated in the Solent and during that Jubilee three sailing ships stood out in their magnificence: Endeavour, Shamrock V and Velsheda, the three surviving J Class yachts. These spectacular vessels, created in the 1930s to compete for the America's Cup, represent the charm of a bygone era of sailing in the collective imagination. The J Class had a short life, the rating rule was born in 1928 for competition in the America's Cup of 1930, which was followed by the editions of 1934 and 1937 but these colossuses of the sea, like many other works of art, fell victim to the Second World War. In the post-war recovery the International 12 Metre Class was preferred in fact, remaining the America's Cup boat until 1987 and of which our own Azzurra is one of the most beautiful examples. In their short decade of life, seven big boats of the Golden Age of Sail were converted into J Class yachts based on the Universal Rule, but only ten new J Class boats were launched ex novo - six American and four British, based on a total of twenty designs. Their names are: Enterprise, Whirlwind, Yankee, Weetamoe, Rainbow and Ranger (for which eight different design versions were produced) for the USA, and Shamrock V, Endeavour, Velsheda and Endeavour II for the United Kingdom. They were the most avant-garde yachts of their time, but they were also delicate, builds that pushed the limits of tensile strength: the hundreds of tons that the 50-metres mast unloaded onto the structures were among the causes, along with incredibly high management costs, of the premature dismantling of almost the entire fleet.

The J Class Association gives ship-owners and designers the opportunity to rebuild "lost" J Class boats and to use different materials from the originals, for both refits and builds from the old plans. The choice of permitting the construction of those hulls that were never built, whose designs date back prior to 1939, and the possibility of using aluminium alloys for the reconstructed hulls, has been a significant driver towards the birth of the largest fleet of J Class yachts of all time. Today, 90 years since the first launch, a total of 9 are sailing. And so seeing these designs that had never seen the light of day, or yachts that had been "lost", constructed and navigating, has a special kind of charm.

Elizabeth Meyer was the first to initiate the revival, managing to restore Endeavour, with the other two following on. Then came Ranger in the summer of 2003; not a restoration but a build, with extensive creative licence compared to the original design by Starling Burgess and Olin Stephens, who was still alive at the time and did not appreciate this much. In truth, the restorations of the other J Class were not carried out in a philologically correct manner either, but being able to see these unique boats under sail again is probably more satisfying than unfaltering loyalty to the original. The research necessary to adapt the original drawings to current technology and safety requirements is carried out by two well-known Dutch yacht designers and their firms, which have acquired specific experience on these types of boats: Gerard Dykstra and André Hoek.

The latest contemporary J Class to be launched was Svea, whose original design was by Sweden's Tore Holm for the 1937 Cup, but at the time was never built. Prior to this Topaz (J8, from a 1935 design by Frank Paine that was never constructed), Lionheart (JH1, born from one of the seven remaining unused designs for Ranger), Rainbow (JH2, built based on the 1934 original by Starling Burgess) and Hanuman (JK6, a replica of Endeavour II) had all been launched. Being the owner of a J Class certainly means owning a boat with a unique history and elegance, but above all it means having the honour of safeguarding a piece of the history of great yachting which will be handed down for posterity. The feelings that a J Class transmits to anyone lucky enough to helm one are unusual: the approximately 150 tons of water moved by its displacement give an impressive sense of power, the low freeboard, the proximity to the surface of the water, the guardrail which is permanently in the water upwind, the famous "J's wave", the dramatic hull wave that frequently washes over the deck at the extreme stern, are sailing experiences that no other maxi yacht, whether vintage or modern, is able to offer. J Class yachts are true racers, in their time they were the state of the art in technology applied to sailing, their performances are still remarkable - and often superior to much more modern yachts with similar displacements. To race them you need a crew of experienced professionals, they are thoroughbred horses that need to be tamed. 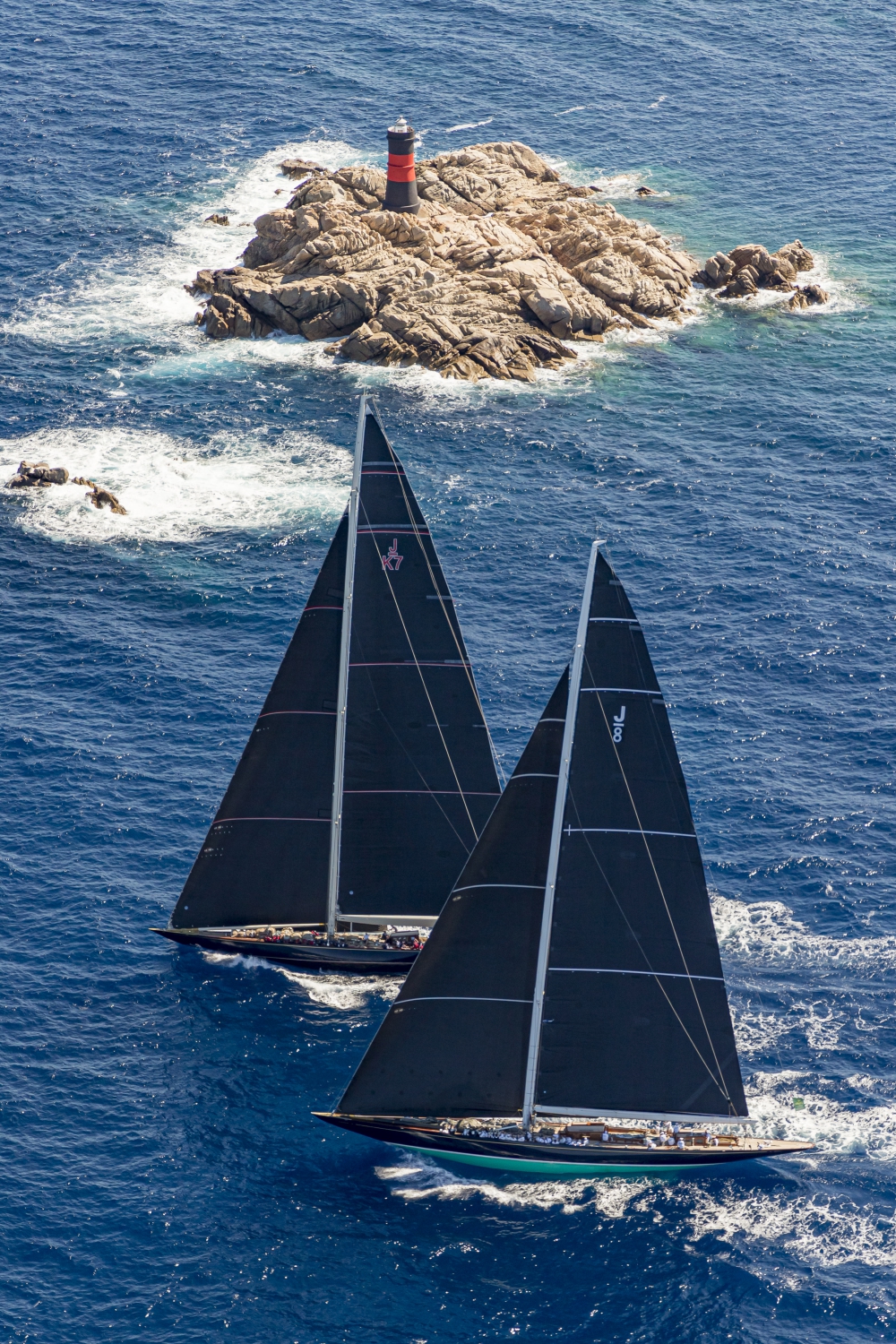 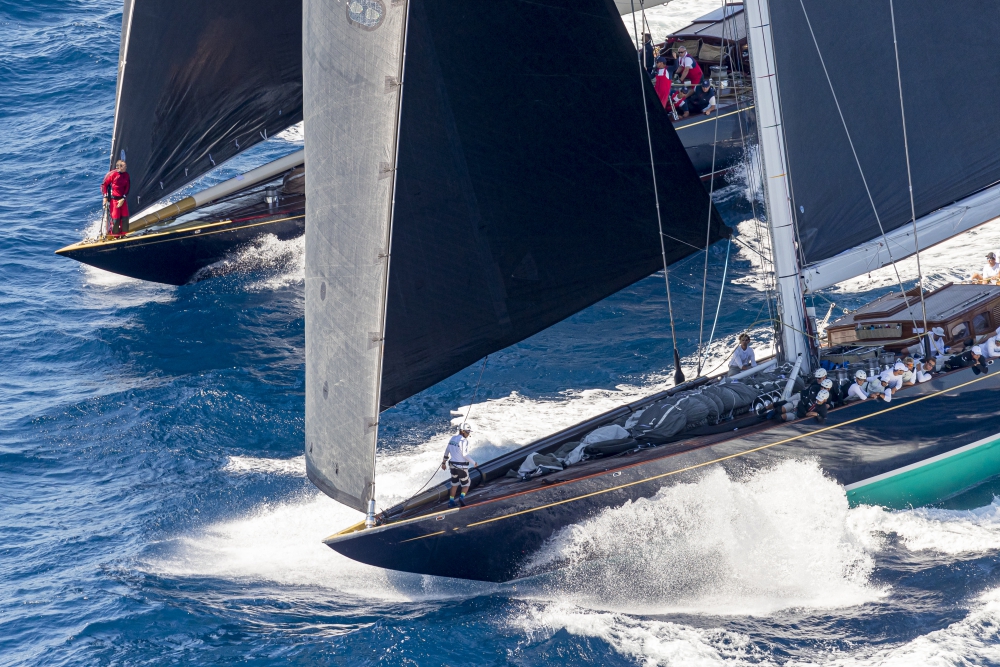 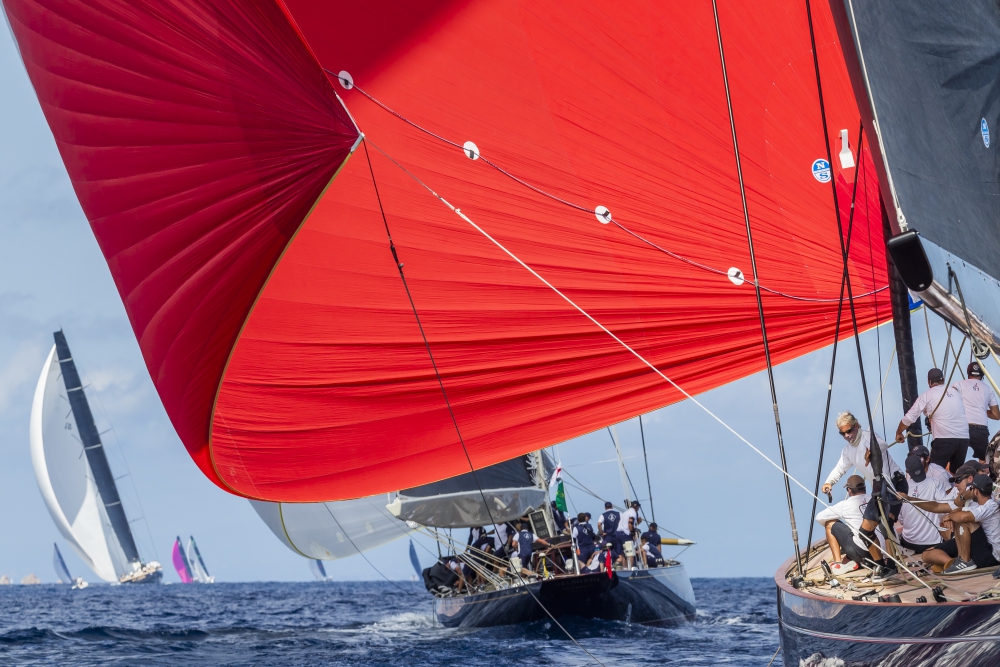 True to its DNA of a class created to challenge for the America's Cup, the greatest number of J Class boats ever assembled for an event, seven of the nine in existence, was on the occasion of the 35th edition of the Cup in Bermuda in 2017. The Js offered spectacular fleet races organised alongside the contest between the foiling catamarans, which saw Team New Zealand bring the Auld Mug back to the halls of the Royal Yacht Squadron in Auckland. Unfortunately, we will not see the J Class boats in Auckland in 2021 for the 36th America's Cup, as the uncertainty related to the pandemic have prevented them from making long-term plans. During past editions of the Maxi Yacht Rolex Cup, J Class racers have often crossed bows against the incomparable setting of the archipelago of La Maddalena, giving rise to magnificent duels with a vintage flavour. Our hope for them, and for ourselves, is to see them again soon, sailing on the waters of the Costa Smeralda.