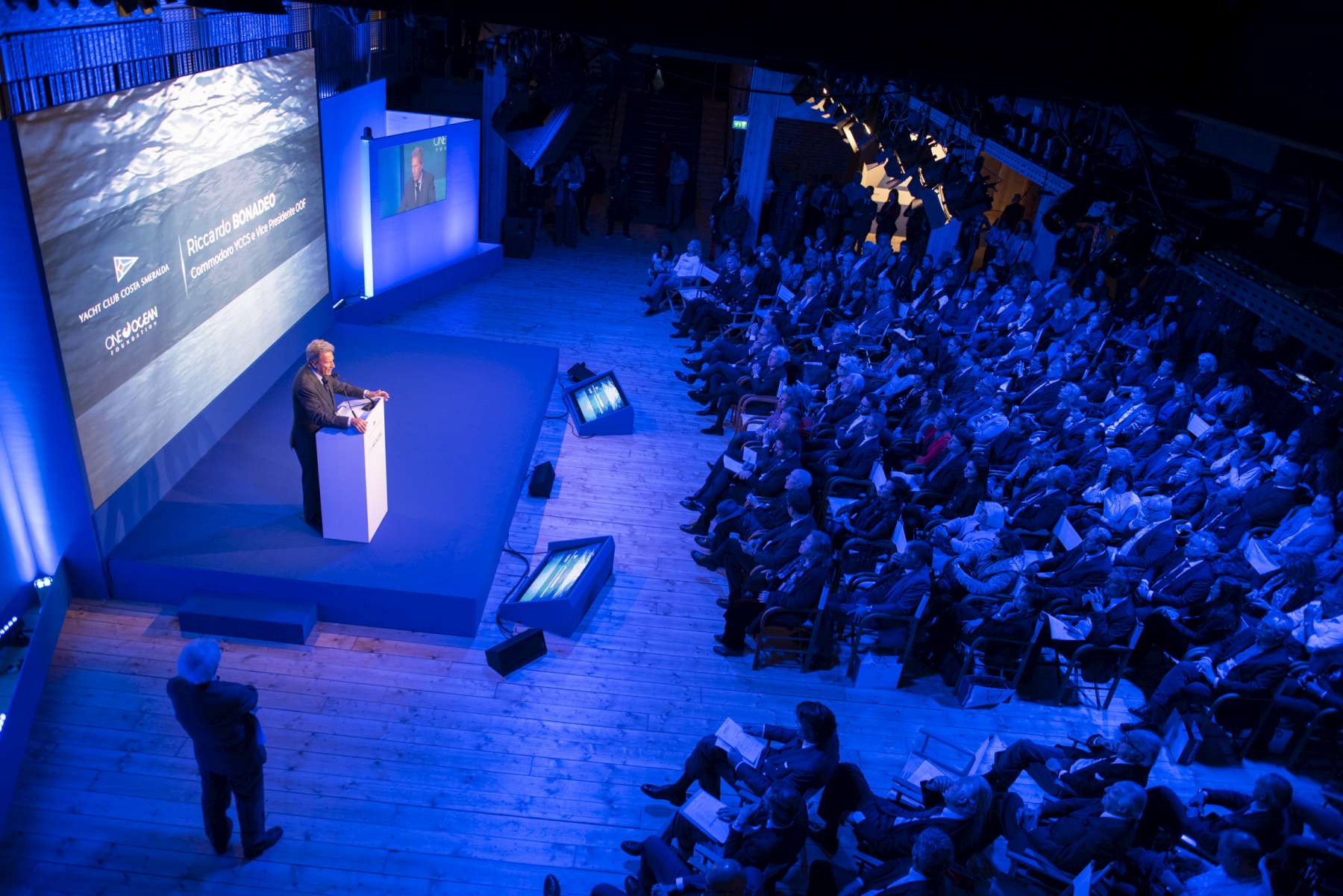 Milan, Italy. 4 April 2019. The sporting calendar of the Yacht Club Costa Smeralda (YCCS) was officially presented this morning in the foyer of the Franco Parenti Theatre in Milan. The One Ocean Foundation was presented in the same venue one year ago, making today the perfect occasion in which to retrace the activities implemented so far by the foundation and to outline those planned for the current year.

YCCS Commodore Riccardo Bonadeo opened the press conference thanking all those present: "The fact that we are able to gather here today is thanks those who believe in our sporting activities and in our activities to protect the sea, the element that has given, and continues to give us so much. In particular, thanks must go to our institutional partners: Rolex, Audi and Allianz, who share the values that enable us, year after year, to act as a point of reference in the yachting world, and now also as regards safeguarding the sea."

The sporting activities of the Yacht Club Costa Smeralda will get underway at the end of April, in support of the Regata dell'Accademia Navale (RAN) for Livorno's Naval Academy. After a successful debut in 2018, the RAN returns for its second edition, departing on 24 April from Livorno and passing Porto Cervo, where the first yacht in real time will be awarded the One Ocean trophy. Competitors will navigate in full compliance with the Charta Smeralda.

Following the first edition of the YCCS Members Trophy (3 - 5 May) the season will continue with the Vela & Golf regatta (17 - 19 May), once again the J/70 fleet will be on the water for this traditional event for club teams which combines the results of the sailing and golfing competitions. From 23 to 26 May the One Ocean Sailing Champions League will be held with Audi as main partner. More than 30 teams from all over Europe will compete aboard the fleet of J/70s in the first qualification stage for this innovative circuit - popular among young sailors - which allows for top-level racing with a contained budget. The Sailing Champions League was one of the first signatories of the Charta Smeralda one year ago, and has always been very attentive to the issue of marine protection.

From the little J/70s, the action moves to larger sailing yachts: from 3 to 8 June the waters of the Costa Smeralda will host the Loro Piana Superyacht Regatta, which this year reaches its 12th edition. Among the innovations for 2019 are the longer duration of the event, with an extra day allowing for any resails, and the participation of multihulls over 50 feet in length. At the moment 24 superyachts are already pre-enrolled, including three multihulls. A significant Southern Wind fleet will participate, with nine boats currently registered. A new trophy dedicated to the memory of engineer Willy Persico, a YCCS member and the father of all Southern Wind yachts, will be awarded by YCCS Commodore Riccardo Bonadeo and Pier Luigi Loro Piana.

The renowned former Olympic class, the Star, sees its World Championship held from 13 to 23 June, with the first championship race scheduled for 17 June while the previous days will be dedicated to measurement checks and practice races. The Star Class World Championship, with Audi as main partner, makes a welcome return to the YCCS after the 1989 Worlds in Porto Cervo were won by the Brazilian crew of Adler/Falcao. The event is expected to attract major names in sailing, often to be found competing in Porto Cervo on much larger yachts. Among them will be Paul Cayard, taking part not only as a sailor but also as an ambassador for the One Ocean Foundation.

In July it will be the turn of the Smeralda 888 monotype class, with the Coppa Europa from 5 to 7 July followed by the Invitational Smeralda 888 from 12 to 14. The Members Championship is scheduled from 3 to 4 August, while the Palermo - Porto Cervo - Montecarlo (21 to 26 August) will see YCCS recording the passage of the yachts at the course gate in Porto Cervo.

The regattas return in September with the Maxi Yacht Rolex Cup from 1 to 7 September. The flagship regatta of the YCCS reaches its 30th edition in 2019 and is expected to host a large fleet. Each year more than 40 maxi yachts converge on Porto Cervo, divided into different categories according to boat type. During the conference Riccardo Bonadeo, YCCS Commodore, presented Gian Riccardo Marini, president of Rolex Italy, with a crest to mark the long and productive partnership between the two entities.

From 19 to 22 September the Bocconi MBA's Conference & Regatta, a sporting event and convention dedicated to students of the world's most prestigious business schools organised with Audi as main partner, arrives in Porto Cervo. During the Conference, as was the case last year in Santa Margherita Ligure, the One Ocean Foundation will present its mission to the managers of tomorrow, who will be invited to sign the Charta Smeralda.

The season will conclude with the Audi 52 Super Series Sailing Week, the most competitive professional sailing circuit for keel boats, won three times previously by the new Azzurra TP52, which returns to race in her home waters for the event. Racing is scheduled from 23 to 28 September, concluding with the final party for the 2019 circuit.

In addition to sporting events, over the course of the season YCCS will host other activities related to its sustainability programme, the One Ocean Foundation: from multiple beach clean-up initiatives in collaboration with local institutions, including an appointment on 8 June to mark World Oceans Day, to the workshop on sustainability in the world of sailing, and the partnership between the One Ocean Foundation and the Centro Velico Caprera sailing school.